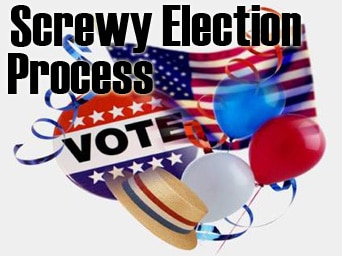 Media whores keep on analyzing the screwy election process to death while ignoring the facts of life—our country is dissolving into a pile of feces because the masses have failed to pay attention and allowed this corporate agenda free rein.

Never mind playing games with how elections are supposedly won and lost; it’s rigged from the bottom of the deck.

To paraphrase the prophet Amos, and repeat myself: “My people perish for lack of street smarts”; Americans are sickly, self-absorbed, spoiled dupes, and they listen to preachers who don’t know the New Testament; Can we shame the media whores for not reporting it?

The Ron Paul rabble rousers may not disappoint, as I was thinking. If you didn’t know the following, this report off the DailyPaul site will give you a lift—if you are not a Repugnican big whig that is:

When he asked for Ron Paul what looked like about 2/3rds of the crowd of over 2,600 delegates leaped to their feet as one and unleashed a thunderous ovation that lasted for 30 seconds. It was absolutely electrifying.

Things settled down and we got down to business. We were allowed to self nominate ourselves as delegates to the state convention. Clark County which is BY FAR the most populated county in Nevada is allowed 1900 delegates. As only a little over 1,200 volunteered, all who signed up were confirmed as delegates. I do not have any exact numbers, but I can tell you we are likely to have an even larger majority at state than we did here. And this was DECISIVE.

We heard from local candidates running for office. Senators Dean Heller and Joe Heck both spoke and were received with something less than whole hearted support, and deservedly so for their unconstitutional votes for NDAA and the patriot act.

But the best part was filling the 14 seats on the Clark County Republican Party Executive Board. These are the people who set local policy. Each of the candidates was given only 30 seconds to speak.

ALL 14 SEATS WERE WON BY RON PAUL DELEGATES! A total sweep!

That was not reported by the whores. Can it be verified? I’m afraid of such information in these bullshit times.

Meanwhile, back at the ranch, as narrator said in days of Tom Mix, I am pondering adult education via the Internet. Which VT actually is much of the time.

The video by Bill Still below is a good place to start for US History, and my favorite on the Roots of Christian Zionism would be another.