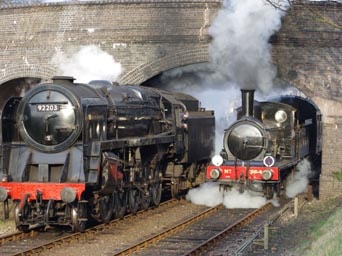 Not all is doom and gloom here in the UK. The North Norfolk Railway (Poppy Line) put on its Spring Steam Gala last weekend and a good time was had by young and old.

Their cute little J15 was celebrating her 100th birthday, dwarfed by wildlife artist David Shepherd’s 120-ton 9F ‘Black Prince’, and the B12 which had been undergoing a major overhaul, emerged into the sunlight looking as brand spanking new as she did the day she was built in 1928. Two visitors joined the proceedings – the Great Western ‘Kinlet Hall’, 83 years old but absolutely immaculate, and a Black Five – to round off this steam spectacular.

As I snapped these snorting, chuffing, hissing beauties and basked in waves of nostalgia I couldn’t help wondering what happened to Palestine’s steam railways. In the days of the British Mandate there was an extensive rail network in the Holy Land with Lydda the hub.

When Britain quit Palestine in 1948 it left behind a considerable steam rail legacy. Lydda was renamed Lod after the Israelis attacked and annexed it. The same fate befell other Palestinian towns. Did anything survive? What happened to the trackbeds, locomotives and rolling stock? Are some hidden away in old sheds or did the Israelis steal everything that was moveable and destroy everything they could carry away?

In Britain the government discarded our fine steam locomotives in its unseemly rush for diesel in the 1960s. It was nothing short of criminal to treat our priceless heritage so carelessly. Enthusiasts scraped some money together and rescued what they could, and today there are well over 100 resurrected railways and tramways with more than 500 miles of track and some 400 stations. They carry about 7 million passengers a year and play a valuable role in tourism.

It is believed that nearly 3000 locomotives have been preserved or are restoration projects. ‘Black Prince’ is a class 9F heavy freight locomotive and one of the last to be build in the UK for main line use. David Shepherd paid just £3000 to save it from the scrap yard in 1967. “She was eight years old, she’d just had an overhaul and they were going to just chuck her away and cut her up,” he said. “I managed to save her and thank God I did.

“You can have all sorts of emotional feelings on an engine when it’s in steam! I just love this engine for the pleasure it gives.”

View the Classics with my compliments…

In Palestine key bridges and other rail infrastructure were destroyed in the 1948 war, the consequence of the UN’s daft Partition plan. Had the Palestinians been left in peace their steam railways would have played a major role in building the nation’s economy and bringing prosperity.By now they’d probably have a number of steam preservation lines in their coastal resorts and population centres like Jerusalem and Ramallah to excite the children, charm their parents and celebrate the romance of the steam age.