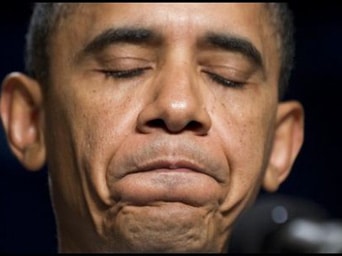 How shall the world view the apology by President Obama for the massacre of 16 Afghan villagers allegedly by a lone U.S. serviceman in Kandahar Province when the President is himself personally responsible for the extra-judicial killing of hundreds of civilians by means of drone aircraft strikes whose crime he defends?

“We’re heart-broken over the loss of innocent life,” the president said of the Kandahar massacre. His seeming expression of contrition rings hollow, though, particularly if one considers how Mr. Obama goes about his daily routine ordering drone strikes and seemingly is unaffected by the “loss of innocent lives” they cause, as well as by the hated companion night raids on Afghan homes, also the result of his policy.

As The New York Times reported March 17th, President Hamid Karzai said “many civilians have died in the (night) raids,” adding, “This has been going on for too long. It is by all means the end of the rope here. This form of activity, this behavior, cannot be tolerated.”

Obama is more than willing to investigate anyone other than himself for war crimes. “I can assure the American people and the Afghan people that we will follow the facts wherever they lead us, and we will make sure that anybody who was involved is held fully accountable with the full force of the law.”  To “follow the facts” the president need look no further than his own mirror. Not surprisingly, he termed the drone strikes “very precise, precision strikes against al-Qaeda and their affiliates.” Given the facts, this is a falsehood.

As investigative reporter Jeremy Scahill writes in the March 5/12 issue of “The Nation,” “President Obama’s first known authorization of a missile strike on Yemen, on Dec. 17, 2009, killed more than 40 Bedouins, many of them women and children, in the remote village of al Majala in Abyan.”

And the Bureau of Investigative Journalism based at City University, London,  put the number of Pakistani children killed in drone strikes at 168. In one raid directed by the Central Intelligence Agency, a drone was dispatched to kill the headmaster of a school, which it did—but 60 children attending classes there were killed as well. “Even one child’s death from drone missiles or suicide bombings is one child too many,” a UNICEF spokesperson said. President Obama takes a very different view. He claims drones have “not caused a huge number of civilian casualties” and it is “important for everybody to understand that this thing is kept on a very tight leash.”

Since 2004, the U.S. has made nearly 300 drone attacks just in N.W. Pakistan alone, killing between 1,700 and 2,800 individuals, of whom an estimated 17 percent were said to be civilians, not so-called “militants,” according to the New America Foundation of Washington, D.C.

In Somalia, last October 14th alone, U.S. drones killed 78 and injured 64 in one raid and killed 11 civilians and wounded 34 more the same day in another. And from March 3-12, the U.S. killed 64 people in Yemen by drone strikes. The government called them  “militants” but local residents countered they were civilians.

Meanwhile, the Pentagon reportedly is building 60 drone bases across the world and its clamor for more planes is so great that contractors cannot keep up with demand. Rather than halt the use of these indiscriminate killing machines, indications are the Pentagon sees them as the future weapon of choice, and by some accounts they have now been used in six countries.

On the website of Iraq Veterans Against the War, the AP reports,  organizer Aaron Hughes declared that Afghan war veterans “believe that this incident is not a case of one ‘bad apple’ but the effect of a continued US military policy of drone strikes, night raids, and helicopter attacks where Afghan civilians pay the price.’’

Mr. Obama has continued and expanded the criminal drone policies begun by his predecessor George W. Bush and both  warmongers are eminently qualified to stand trial for their crimes.

Sherwood Ross is a Miami-based public relations consultant. Reach him at [email protected]