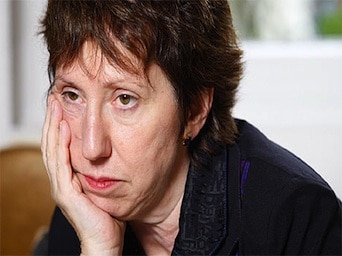 At the “Palestine refugees in the changing Middle East” conference in Brussels, Baroness Ashton, described the murders in Toulouse as a “terrible tragedy”, but  she then added: “When we see what is happening in Gaza and in different parts of the world – we remember young people and children who lose their lives.”

Seemingly some prominent Jewish and Israeli leaders couldn’t agree less. For them Jewish suffering exceeds all other suffering and Palestinian’s in particular.

The London Jewish Chronicle quoted some of the outraged critics.  “Even when read in context, Ashton’s words are beyond unacceptable,” said Oliver Worth, the British chairman of the World Union of Jewish Students. He said they were “truly outrageous and revolting” and called for her to resign because she had “lost all credibility”.  And yet, Mr Worth fails to explain why is it “outrageous and revolting” to equate Jewish suffering with Palestinian one.

“Baroness Ashton’s remarks were both crass and wholly inappropriate,” said  the chief executives of the Board of Deputies, yet he also fails to provide any reasoning.

“There is absolutely no equivalence between the situation in Gaza and the cold and callous murder of Rabbi Jonathan Sandler and the three children,” said Stefan Kerner, director of public affairs for the Zionist Federation. And I wonder why there is no ‘equivalence’,  is it because the Jews are yet to withdraw from Toulouse?  Or may be Mr Kerner actually expects the French to withdraw from Toulouse and to leave it to Rabbi Sandler and a few other Jews. I obviously find it really difficult to follow the Zionist logic anymore.

The Rabbi added: “For a person in Baroness Ashton’s position to even consider her comments appropriate is disgraceful. She should withdraw her statement immediately and apologise unreservedly for the offence that she has caused.”  And I wonder why is it offensive to Jews when someone equates their grief with Goyim’s suffering. Does the Rabbi really believe that Jewish suffering is somehow superior?

Avigdor Lieberman, Israel’s Foreign Minister, said he viewed her remarks as “inappropriate”. He said he hoped that she “re – examines and retracts them”. And I wonder, what kind of a retraction would please the Israeli Government. Do they really expect Baroness Ashton to  accept  that Jewish suffering is the ultimate form of human grief?

Israeli war criminal as well as Opposition leader Tzipi Livni also,  attempted to offer some reasoning. She  described Ashton’s remark as “reprehensible, infuriating, and wrong” to draw any link “between the murder of children in Toulouse and the massacre Assad is leading in Syria and the situation in Gaza”. Livni may be right for a change, the crime committed in Gaza by the Jewish State in the name of the Jewish People is indeed unique in the history of brutality. Also the fact that 94% of the Israeli Jewish population supported IDF genocdial tactics at the time of operation Cast Lead is also very unique. Israel’s war crimes are indeed uniquely cruel and beyond comparison.

But Livni didn’t just stop there, she tried to qualify her statement. “A hate crime or a leader murdering his people is not like a country fighting terror, even if civilians are hurt.” According to Lvini, the Baroness had failed to make “the appropriate moral distinction”. To start with we do not know yet what led to the tragic event in Toulouse. However,  the fact that Israel defines the Palestinians as “terrorists” is yet to provide the Jewish State with an moral excuse to slay the indigenous people of the land  and to abuse every possible human right.

I guess that we are all becoming impervious to Jewish political logic. But maybe this is another symptom of the Zionification of our reality. From now on we are expected to obey.

Gilad Atzmon’s New Book: The Wandering Who? A Study Of Jewish Identity Politics Amazon.com or Amazon.co.uk.