Home Veterans Is it Time for Americans to Take up Arms? 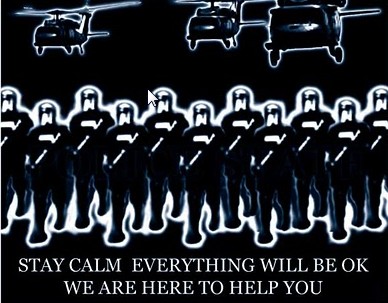 Are We Too Late to Stop the Police State?

What have things come down to when a mainstream democrat, reluctant “Obamacare” supporter tells you the guy he has voted for and, worst of all, may suggest voting for again, has lost his friggin’ mind?

When Obama signed the National Defense Authorization Act, apologizing for the sections that ended our constitution, civil trials, all human rights in America, I suspected something was going on I didn’t see.  How could Obama do this?  How could he break so many promises?

I remember 1999 when the Project for a New American Century called for a “New Pearl Harbour” and only a few months after they get into office, an illegal act on a 5/4 Supreme Court vote in itself, the World Trade Center is blown up and the Pentagon attacked.

Anyone who still believes any of that is coincidence, please go elsewhere.

Then we get a new law, it allows the government to arrest demonstrators at locations it deems “government related?”  Are we talking Dick Cheney’s heart transplant party here?  With no hard definition, this is martial law.  Even with one, it is blatantly unconstitutional, same as with the NDAA.

Then the Supreme Court decides to allow police to strip search anyone, anywhere for any reason.  If this isn’t considered unconstitutional, remember the language, “unreasonable search,” I don’t know what is?

Then we have the DHS, the Department of Homeland Security, a name I find offensive, buying 750,000,000 rounds of .40 cal hollow point ammunition.  Who for?

Even the army can’t use it, their 9mm and hollow points are illegal, police don’t use them, the army can’t, but the DHS has enough to fight WW2 twice over and more.  In fact, the ammunition being purchased in massive quantities is specifically designed, not to wound or even just to kill.  It is designed to maim, to cause injuries that will eliminate any need for emergency treatment as the video above makes abundantly clear.

Sounds to me like someone is both afraid and planning something.

Sounds to me like our government is afraid of the people of the United States, the “electorate” they are meant to “serve” not “rule” and are planning to use all this force and these extremely illegal laws against our own country.

It seems to me like the government of the United States is, in itself, planning a rebellion against America.  Passing laws that violate the constitution is a crime.

In many states, it is now illegal, not just  to protest anything but to photograph police?  What do they have to hide?  If you don’t want to be photographed, it seems to me you are planning to commit a crime.  If you don’t like evidence, then move to a police state where trials and evidence don’t count.

Are we there already?

There are three primary issues that have changed in America.  I can’t say these, in particular, are the driving forces for the acceleration of events leading to increased police powers, government’s assault on human rights and the general feeling, the “fear of government” that millions of Americans of varied political and social beliefs are now expressing.

We have several areas of government conspiracies to consider.  The traditional one has involved the FBI creating militia type movements themselves.  They no longer have the patience to wait for them to form and then infiltrate them and push them toward acts of violence.  They must believe the younger generation are too lazy.

The Hutaree incident in Michigan last months is one such incident where the FBI was caught by a Federal Judge.  Charges, with minor exception, were dropped when it was shown that an FBI informant with a long history of mental instability and criminal behavior, at the  behest of federal officials was, in actuality, the only member of a group of weapons enthusiasts with anti-government plans.

When the court learned the FBI had, in itself, fostered its own conspiracy and had, in itself, planned the murder of police officers, charges were thrown out.  Had police officers been killed because an FBI informant had been directed to do so as part of a “sting operation,” would the officials responsible have been arrested and punished.

In a broader sense, is it not a felony for a law enforcement organization to plan the murder of fellow officers in order to effect arrests?  In reading laws involving the crimes of “conspiracy to murder a law enforcement official,” there is nothing in the language that would prevent the immediate arrest of the FBI and US Attorney officials involved in this operation.

Operation Fast and Furious, wherein the Department of Homeland Security and the Alcohol, Tobacco and Firearms division supplied weapons to known criminals that were used in the killing of law enforcement officers, falls under the same laws.

All involved are subject to arrest, detention and execution.

Something else is there.  Are police being subjected to these efforts for a reason?  Does Homeland Security need police to feel angry, paranoid, isolated and prone toward acts of senseless violence and revenge?  We might also ask why police don’t ever seem to notice that every time they seem to be plotted against, the federal government’s hand is in it?

On September 11, 2001, over 3000 Americans died in incidents that are no longer clear.  What we have learned is that Building 7 at the World Trade Center was destroyed by explosives and that there were people in the building that were murdered as a result of these orders given by a Larry Silverman, a leasing agent, not a government official at all.

Additionally, two other buildings, the largest and strongest in the world theoretically “pancaked” after being hit by airplanes that, according to aviation experts, were incapable of such performance and were not in the area at the time.

Scientific evidence has brought a number of questions to mind.

An interview with a high ranking Army intelligence officer indicates that, after years of accepting the 9/11 Commission Reports, he is of the belief that the twin towers at the World Trade Center were destroyed by nuclear weapons of new and innovative design that give off no residual radiation.  These weapons, called Deuterium/Tritium Fusion bombs are extremely small and no other device has been described that can be credited with vaporizing enough steel to build 3 Nimitz size aircraft carriers.

Steel beams weighing dozens of tons twisted into pretzels over 500 feet from the nearest heat source, something that didn’t happen at either Hiroshima and Nagasaki.

Others question the Pentagon attack.

All question the invasion of Iraq, with most of the world declaring it a war crime.  Similarly, the attack on Afghanistan is considered illegal by 69% of Americans according to a recent poll.

The American people are, by any stretch of the imagination, no longer willing to be a part of whatever plans have been made for them.  Is this why the current election is so unique, with GOP candidates of incredible lack of qualifications, closets filled with skeletons, while key Democrats face criminal prosecution, Timothy Geithner of Treasury and Janet Napolitano of Homeland Security.

The entire Bush administration is under limited arrest, facing war crimes tribunals if taken into custody outside the United States.

We have received confirmations of reports that former British Prime Minister Tony Blair has been under a form of “house arrest” for years now.

The question at hand is “how is it going to be done?”  Will a dirty bomb or actual nuclear weapon be detonated in the United States?  Will Israeli groups, “rogue” or not, groups that stand accused by experts of complicity in 9/11 crimes, not just the World Trade Center but the George Washington Bridge attack and others, be used against the United States?

Are such groups representing the nation of Israel or working as private contractors for a secret society, the CIA or a terrorist group?

These concepts, 10 years ago outlandish, are on the tips of every tongue, from the White House and FBI to the Pentagon.

They just aren’t in the news.  In truth, nobody knows the truth and suspicions can go everywhere or anywhere.  Maybe this is the plan in itself.