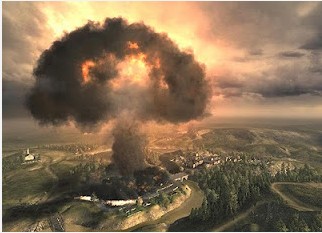 Why would such honorable men conspire against their leader and exemplar, and urge other honorable men to join them? Are they so insidious, or am I so invidious? I think neither, and prefer to believe that it’s a matter of intelligence professionals who have the jitters.about our likely future — a false flag nuke with a nuke war to follow. My assessment of their anxiety comes from past and not present experience. There is nothing like a death sentence to steady the nerves, and I’ve neared the end so many times that I’m numb to the fears common to more vital men. I’m serene as the commander of Ghost Troop, and accordingly the most important (and unmentionable) officer of my generation.

I present the crucial emails of early April as an indication that we live in interesting times. I’ve edited some for brevity. and clarity, while trying to preserve both the key details and general sentiments.

I recently had a phone conversation with SFC Buswell, and we wondered about your current condition. He would like to visit you in person, and I hope you will be able to arrange this with him fairly soon. It is always great to receive your emails as evidence that you are still hanging in there.

I have not heard from Captain May. I have sent him several emails and a few phone messages, but perhaps his situation prevents any communications. Regardless, a conduit for communications like the cutting analysis Captain May wrote in the past is even more needed today.. The initial analysis he rendered on Obama was spot-on. In his December 2008 article False Flag Frankenstein? he called him “Black Bush” and “Nuclear Obama.”

My single greatest concern remains the possibility that someone is exploiting the fact that Captain May has not been able to speak since around Jan 2011, and it is possible that some alien entity like Mossad-CIA-MI6 has hijacked his identity for nefarious purposes. Maybe the real Captain May has been dead for a while, and someone is using his identity. In the worst-case scenario, someone could pop a mini-nuke in an American city, and have a fake Captain May implicate Ghost Troop in some kind of trumped-up terrorist conspiracy plot. Captain May decided to ally himself with Islamic Intelligence in writing articles for Veterans Today. If someone were trying to set up Ghost Troop as part of an emergent “white Al Qaeda,” wouldn’t establishing links with some kind of Islamic intelligence be an obvious route?

Yes, I agree with your assessments 100%. The part about Ghost Troop being compromised and the Islamic Intelligence are spot-on. I too questioned Captain May about this, he said it was his prerogative to cull whatever sources of intelligence he sees fit to utilize. One thing we may consider is writing a piece and publishing it, claiming that any future communiques from Captain May are likely fraudulent and not to be trusted. This is the final straw — once this is executed, there is no going back, and, if Captain May is still alive, just 100% incapacitated, then we will have egg on our faces, and no longer have an alliance with him. I’m going to call Mrs. May again, perhaps this weekend, and perhaps you can listen in on my conversation.

In this current situation, we are waiting for the other person to make a move. This is okay, since it gives us a chance to contemplate our next move, too. Another move to consider is that we publish something akin to this email, where the reader can see the situation we’re in and how we feel for Captain May and his leadership and writings, etc., and how we’re critically concerned that he may have been compromised, and that a result of this compromise there could be the scenarios you outlined.

I think that our best approach at present is to solicit ideas for ways to handle this situation from the individuals copied to this email and conduct an online email conference. In order to function as an effective cyber militia, I think that we have to be professional about identifying our own weaknesses. Hence, I am not worried if we make our concerns public about Captain May and we subsequently find out that he is alive. Captain May may be dead — and this could actually encourage a false flag attack that attempts to frame us. How ironic if a cyber unit originally intended to interdict  false flag attacks through public alerts actually helped foster one!

I like your idea of continuing your efforts to contact Captain May’s wife. Rather than going to the extra effort of involving myself in a phone call, it may be more effective for me to make my own separate efforts to contact her as well as other individuals who have been close to Captain May in Houston. As another idea, we may want to file a “missing person report” with Houston police and request their services in regard to determine Captain May’s status. However, we may have to be careful and selective, since in The Mayday Alert and the Assassination of Roland Carnaby I describe the strong likelihood that certain Houston police were used by the Mossad to assassinate CIA operative Roland Carnaby. Therefore, inviting certain Houston police into this situation could backfire. I look forward to your additional thoughts and recommendations, as well as those of other individuals copied to this email.

I apologize for delay in responding to your importunings that I verify my existence, but my disease has become more difficult, and reduced my ability to blink my eyes. Accordingly, although my mind is as quick as you remember, my writing has become glacial. It took me two long days to edit and republish your kind article of 2007, How Ghost Troop Stopped a BP Nuke, and it took another two for me to write my latest, JetBlue 191 Jumble: False Flag Flight?

I must congratulate you for achieving your aim of prodding me into action: by shotgunning my personal travails, your issues with me and invitations to my colleagues to undermine my credibility, you have become the foremost concern of your former commander. Accordingly, I invite you or your peer, SFC Buswell, to come to my house to confirm my existence.

Apropos of Buswell, I have been blocking email from him since receiving this, in which he threatened to do what you are doing. He revealed a grudge because I dragged his name into the successful Ghost Troop defense of Houston in July 2006. This was the only Ghost Troop mission in which he did more than sign alerts that I had written, and the except below invalidates even that:

I know it must be extremely scary to be bound 100% to your bed, and to be 100% dependent on others for your survival. It likely seems that the only tools at your disposal are your ability to close down your family relations, and write articles and essay’s for the good of this nation. I was wondering if your mind was slipping away from ALS, but, clearly you are still in command of your mental abilities.

Bottom line still remains; your identity is at risk. If at any time I feel your identity has been compromised whereas any article you write if under duress, or, if after being hijacked by Mossad/Al-CIA-duh types, and their efforts will be to steer your words down another path, if I see this, or any sign of this, I promise you I will alert the world, and draw a line where Captain May’s articles end, and subversion began. You can take that as a threat if you wish, but I promise you I will do this — its the mission of my conscience — just like the mission of your conscience was to expose me as the one that gave you the “faxed intelligence” that saved lives in the Beaumont, Texas Exxon/Mobil false flag refinery explosion on July 2, 2006.

Your invitation for SFC Buswell to visit you appears to be a step in the right direction. As I recollect the last time he met with you in person is when I also met him at your 50th birthday party at your house in Jan 2010. Please take it as a backhanded compliment that we are so concerned about keeping tabs on your real situation. If you and your activist work were not so important, many of us would certainly have more pressing areas to focus on. I believe that we should be transparent and accountable about real or potential deficiencies within Ghost Troop. To do otherwise could cause real concerns that, as an informal cyber militia, we are undisciplined, unprincipled, and otherwise out of control.

At the time I wrote the last email, I did not know of any better approach than to force this issue. I continue to admire your tenacity and ingenuity in overcoming your state of extreme incapacitation in order to communicate over the Internet. I look forward to a joint situation report from you and SFC Buswell.

I’m out of patience with your importunity and presumption. In the last week I have published two articles, and have in unfortunate consequence had to defend myself against both you and SFC Buswell. The only effective course remaining for me is to end my correspondence with you, as I did with Buswell six months ago. I have limited time and resources, and can see no advantage in using them to placate you two.

Neither you nor Buswell are still members of Ghost Troop, you are Ghost Troop veterans. I only offer to suffer your visit to de-fang you, and thereby to defend myself against your threat to attack me.. I regret that you have forced me to cut connections, and henceforth will neither send email to you nor receive it from you. I part with gratitude for your former and favorable actions.