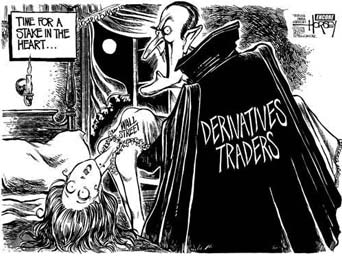 It’s time for a stake in the heart of unregulated derivative trading which represents over 150 trillion dollars in the United States alone with most of that risk backed up by the FDIC and ultimately American taxpayers. These unregulated financial vampires are sucking the blood out of Wall Street and leaving America vulnerable to another immense financial collapse. 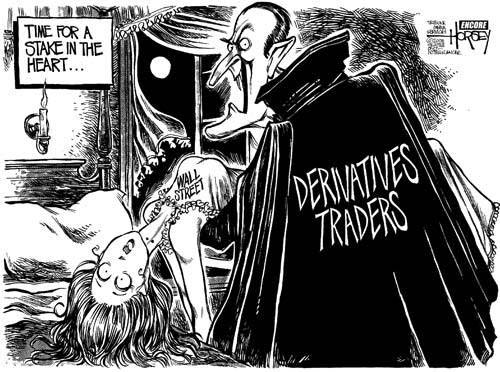 America is on the edge of an immense moral and financial collapse which is more than evident on Main Street America but still actively hidden and disguised on Wall Street. But behind the smoke and mirrors of a corrupt financial system are the vampires of Wall Street ~ the unregulated Derivative Traders whose feeding frenzy continues unabated and all backed up by the federal Reserve.

Here are some economic figures from 2011 to confirm the ongoing Main Street collapse;

1.    A staggering 48 percent of all Americans are either considered to be “low income” or are living in poverty.

2.    A Gallup poll from earlier this year found that approximately one out of every five Americans that do have a job consider themselves to be underemployed.

4.    One recent survey found that one out of every three Americans would not be able to make a mortgage or rent payment next month if they suddenly lost their current job.

5.    According to a recent study conducted by the BlackRock Investment Institute, the ratio of household debt to personal income in the United States is now 154 percent.

6.    As I have written about previously, 19 percent of all American men between the ages of 25 and 34 are now living with their parents.

7.    One study found that approximately 41 percent of all working age Americans either have medical bill problems or are currently paying off medical debt.

8.    Today, one out of every six elderly Americans lives below the federal poverty line.

9.    The U.S. national debt has been increasing by an average of more than 4 billion dollars per day since the beginning of the Obama administration.

Obviously, Main Street is severely ill and deeply in debt. But Wall Street, on the other hand, is severely infected with the cancer of greed and the primary symptom is unregulated derivative trading.

Watch just the first 15 minutes of the enclosed Capital Account video of an interview with Janet Tavakoli, author of The New Robber Barons, who reveals more about derivative trading in a few minutes than most of the talking heads on the financial newscasts and asks the still pertinent question of why isn’t Jon Corzine in Jail?

Here are some of her other nuggets: The recently passed Jobs Bill is a total sell out to unregulated fraud on Wall Street and that the 600 trillion dollar derivative market is controlled fraud.

Do you ever wonder why it’s possible for the top hedge fund manager in 2011 to make $1,442,308 an hour, while it takes the average American family over 29 years to earn that much? The obvious answer is that they have access to illegal insider information that is inaccessible to the rest of us. See How Hedge Fund Vampires Use Insider Info to Extract Their Dishonest Fortunes. See article ~

And who is at the center of this eminent financial Armageddon?  The privately owned and secretive Federal Reserve Bank ( the mother of all vampires ) who continues to print money out of thin air and back stops ( via the FDIC ) well over 150 trillion dollars of unregulated derivative bets on bets for the United States ~ which only has a gross domestic product of 15 trillion dollars.

We are obviously in “game over” territory here. According to one new survey, approximately one-third of all Americans are not paying their bills on time at this point while the Federal Reserve is desperately trying to control interest rates. The Fed purchased approximately 61 percent of all government debt issued by the U.S. Treasury Department in 2011~ and this is the only thing that is keeping interest rates in the United States from soaring dramatically.

The only question that remains now is when the collapse will take place and how bad it will be.

Watch this 3 minute video of a visibly shocked Progressive Radio Host Thom Hartman try to come to grips with the ticking $150 plus trillion derivative time bombs that are now backed up by the Fed and ultimately you and me as taxpayers.

The needed stake in the heart of the unregulated derivative vampires would be the resurrection of The Glass-Steagall Act, officially known as the Banking Act of 1933, which was a Depression-era reform that separated commercial banking from investment banking (repealed during Clinton administration) whereas an institution could either take deposits or trade securities, but it couldn’t do both ~ and most certainly was never considered too big to fail nor could it be bailed out by secret Federal Reserve loans.

There are two times in a man’s life when he should not speculate: when he can’t afford it, and when he can: Mark Twain.