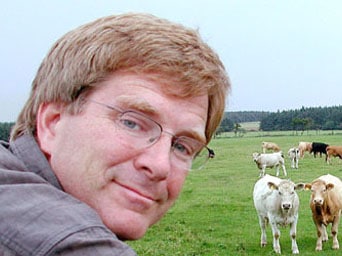 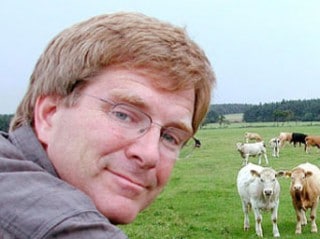 Rick Steves, Travel Guru on PBS, has been everywhere, and now reveals on the web what he has learned about Israelis behavior by posting a video that belongs among the archives of what I call the VT educational program.

Steves wrote the following epiphany on his website April 18:

“Do you know the frustration you feel when you believed in something strongly and then you realize that the information that made you believe was from a source with an agenda to deceive?

“I just watched a powerful and courageous documentary called ‘Peace, Propaganda, and the Promised Land.” It certainly has its own agenda and doesn’t present a balanced coverage. Still, it showed me how my understanding of the struggles in the Middle East has been skewed by most of our mainstream media. I saw how coverage of the Israeli/Palestinian problem is brilliantly controlled and shaped. I pride myself in understanding how the media works…and I find I’ve been bamboozled.

“Invest 75 minutes in watching this, because most of the time we only hear one viewpoint when it comes to the interminable struggle in the Holy Land. While this documentary would never be shown on commercial TV in the USA, it can be viewed online (Peace, Propaganda, and the Promised Land). In my view, many Palestinians live under inhumane conditions, and US taxpayers help to make it happen. Please, watch this and then share your impressions.

“Criticism of Israel’s policies is not automatically anti-Semitic [see J-Street for an example of a pro-Israel, pro-peace groupnew. In fact, the irony is that for Israel’s hard-liners, their clever PR strategy could be their own worst enemy. While Israel certainly deserves security on its land, the Israeli occupation of Palestinian territory (in Gaza and the West Bank) degrades Israel and drives Palestinians to desperation. The question of whether Israel is conducting a brutal military occupation or a reasonable defense against terrorism gets no real airtime. If we care about the long-term security of Israel, we have a responsibility to understand what our government is funding and supporting.

“I believe that watching this documentary is a painful first step to finding a just and lasting peace in the Middle East. If you are a friend of Israel, you must watch “Peace, Propaganda, and the Promised Land.”

Most Americans are like Steve, they never heard this truth.

Thanks to Charles Carlson’s WHTT.org site for pointing this out.