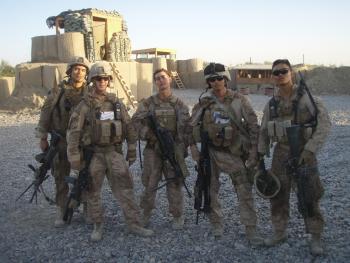 The Patriot Guard roared down through Virginia, stating out on I-495, over I-66, and down I-81, a couple hundred strong, escorting Mooresville, NC’s own, Lance Cpl. Garrett Carnes, returning home from Afghanistan. At the North Carolina state line, The Patriot Guard of North Carolina picked up the honor guard task to complete the journey home.

The citizens of North Carolina are probably more than a notch ahead of many states, as the military tradition is part of nearly 1/3 of the families who reside here. If fact, the Mooresville region of west-central North Carolina is among the highest per-capita number of military families in the nation; they can recognize a hero when they see one.

On February 19 Garrett’s life and the lives of the Carnes family would be changed forever, when an IED (Improvised Explosive Device) went off, nearly killing the young Marine. As we have seen through wars, since World War II, battlefield Corpsmen (Medics), are so well trained, they seem to possess the Hand of God in administering to the wounded. Evacuation from the firing line to surgeons waiting to apply the most advances medical procedures have effectively enabled combatants to survive some of the most devastating wounds even seen. Many who have never seen the horrors of war may not understand battlefield trauma, but such miracles are happening every day.

For those who are risking their lives waging battle against the cowardly terrorists who seldom distinguish between innocent civilians and soldier, the Corpsmen, doctors and nurses provide an element of comfort that those who have fought in other wars could never have imagined. Some will always view it negatively…that returning home less than whole is a cruel and punishing way to reward those who fought valiantly for a cause from which many have grown weary. But for those of us who believe in a higher being, the challenges to those who have faced such a situation and the families that become the support mechanism,  perhaps there is some purpose to become an inspiration to others, or maybe it is just the hand of fate. Whatever your point of view, it is now the nation’s responsibility provide all that is necessary to help the wounded like Garrett to return to as normal of a civilian life as possible.

“The willingness with which our young people are likely to serve in any war, no matter how justified, shall be directly proportional to how they perceive veterans of early wars were treated and appreciated by our nation.” George Washington

The people of west-central North Carolina understand this. We have had our fair share of wounded as well as our fair share of those who have given all. With Ft. Bragg down in Fayetteville being just a sort 2-1/2 drive down the highway, we have seen our youth pay the price for what politicians believe is important, even though most of us cannot understand how a war is allowed to go on for eleven years, and we ask ourselves, “Where are the REAL leaders?”

As the roar of motorcycles echoed among the trees that line I-77 coming down from the Virginia state line, every overpass was lined with North Carolinians, waving flags and saying prayers that the rehabilitation and recovery of Garrett, the well-being of the Carnes family, and that the ultimate victory over terrorism will soon be seen. Many Northbound cars heading up I-77 toward the Virginia state line pulled to the side of the highway to pay tribute to our hometown hero.

The Patriot Guard pulled into rest stop 42 just outside the Mooresville turnoff for one final “pit stop” and was greeted by many more that joined the final leg of “the ride” into town. Helicopters circled overhead as Garrett left the confines of the motorcade and joined his father on the back of his motorcycle, donned his helmet, and slipped into the rear echelon of the parade of motorcycles and cars which would mark the last few miles of the long trip home from Walter Reed hospital.

We were in a crowd positioned in front of Richard’s Coffee Shop, “The Most Patriotic Coffee Shop in America” and home to our Welcome Home Living Military Museum, just down the street from the Charles Mack Citizen Center on North Main Street where Mayor Miles Atkins and a handful of local political leaders were on hand to thank Lance Corporal Carnes for his service, the Carnes family for its sacrifice, and to give Garrett a key to the city. From Mooresville to Afghanistan, to the U.S military hospital in Germany; to Walter Reed Medical Center in Bethesda, Maryland, and now back to Mooresville, the journey home has been completed.

The journey has been completed, but the story of Garrett’s new life is just beginning. His life was miraculously spared for a call to duty for what only God knows at this point. From a world of peace to one turned upside down, his new mission will begin with a challenging rehabilitation that will make boot camp seem like a Boy Scout Jamboree, but the Marine Corp builds MEN, and Garrett will rise to the occasion. At the age of 22, his life will become a model to many of those who follow.

As we veterans have witnessed from those who have receive medals of valor, the selflessness of those who are recognized, lives on. What they did was simply “just part of the job”, nothing special, nothing heroic. Garrett joined that elite corps of warriors who know that the honors received are done so for all of those who are part of the Team. They took the wound, they bared the task completely disregarding their own safety so that their brothers in arms would live to fight another day.  That was evident to the crowd in which there wasn’t a dry eye, when Garrett had his moment with the microphone…

He admitted he is a person short on words and was having a hard time understanding why so many would come out to honor him. While he was deeply gratified, he called his grandfather to come through the crowd so that he could be recognized for his service in Vietnam as a Navy Corpsmen. We wanted to hear more, but true to his word, he was short and to the point. The mark of a true hero is not in words, but are spoken far more eloquently in his actions.

Though Iredell County is small in population, it poured out its soul to show it is big in heart and spirit. Thousands showed up to pay tribute and many brought friends and family to the ceremony from South Carolina, Virginia, and all other the state. It will be a day of remembrance for the entire community. God bless you Garrett.