Home Veterans U.S. And Israel More Likely To Attack Iran Than The Other Way... 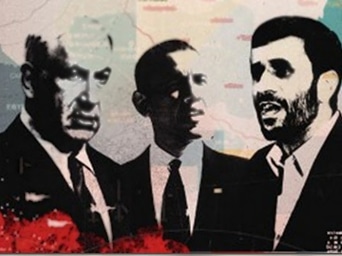 Just looking at the facts, it appears far more likely that the U.S. will attack Iran again than Iran would attack the U.S. or Israel, America’s Middle East pawn. I say “again” because the U.S. has already an embarrassing record of aggression against Iran, so, if past is prologue, the U.S./Israeli alliance will strike Iran, not the other way around. A review of the historical record and contemporary military outlays and actions tends to support this view. In 1953, the CIA overthrew the democratically elected government of Iranian Premier  Mohammad Mossedagh, a crime for which the U.S. has never apologized. The overthrow put Mohammad-Reza Shah(king) Palevi on the throne, a man whose dictatorship  savagely tortured and killed thousands of Iranians for 26 years.

As all this occurred long before Iran had the beginning of any nuclear activity so in no way could the U.S. make the claim it makes today that Iran’s nuclear program  then represented some kind of existential threat to U.S. ally Israel that justified an attack. Instead, the evidence overwhelmingly supports the view the CIA intervention came about because Iran kicked out the Anglo-Iranian oil company (known today as BP) when the British firm swindled the Iranians out of their fair share of revenues from the oil fields. The Shah’s savagery led to angry Iranians toppling his regime and storming the U.S. Embassy in 1979, holding its  54-member staff prisoner for 444 days and embarrassing the U.S. before the world.

The next U.S. attack on Iran came via America’s then Middle East goodbuddy Saddam Hussein, the Iraqi dictator. He got poisonous chemicals, anthrax and bubonic plague  germs from the U.S. to use against the Iranians! Hussein had started the war to grab Iranian oil and was at the point of losing the struggle when the U.S. intervened. Tens of thousands of Iranian troops and civilians were struck and killed by U.S.-supplied poison gas. The U.S. also supplied Hussein with military equipment and valuable intelligence.

On July 3, 1988, toward the end of that war, scheduled Iran Air Flight 655 was blown up in mid-air over Iranian territorial waters (the Strait of Hormuz) en route to Dubai, in the United Arab Emirates by the guided missile cruiser USS Vincennes. All of the airliners’ 290 civilian passengers and crew were killed. The U.S. agreed to pay Iran reparations for those slain but, again, the U.S. never apologized, once more betraying its hostile intent.

More recently U.S. and/or Israeli clandestine attacks have taken place against Iran, including the dispatch of spies  into that country as reported by investigative reporter Seymour Hersh. What’s more,  Iranian nuclear scientists have been assassinated; Iran has also been assaulted by computer virus; and oil pipelines have been blown up. Most recently, Hersh wrote in “The New Yorker,”  Iranian  dissident terrorists have been trained in America and sent back into that country with enhanced capability to create mayhem. If these acts do not bare hostile intent, there was the downing a few months ago of a U.S. drone spy plane in Iran air space.

Finally, there has been the U.S.-led campaign of sanctions against Iran, said already to have cost that country $60 billion in lost revenue from plunging oil sales. All these high-pressure tactics allegedly have been taken because Iran has got a nuclear military program—-a charge top U.S. defense and intelligence chiefs uniformly state is unsubstantiated. Their view is supported by two past directors of the UN’s International Atomic Energy Agency.

If the foregoing list of aggressive moves is not enough to reveal the hostile intent of the U.S., there is the threat of a massive assault against Iran from some 40 U.S. military sites that just happen to ring Iran, part of the system of 1,100 U.S. foreign bases from which the Pentagon militarily dominates the planet. Bases from which the U.S. menaces Iran are located in Turkmenistan, Kyrgystan, Pakistan, Saudi Arabia, Oman, Israel and Turkey, among others. The Turkish base at Incirlik, for example, has U.S. tactical nukes in its arsenal.

Aggressor nations may often be identified by the nature and number of their armaments, their preparation for war, and the disposition of their troops. Hitler, for instance, massed 2-million troops along the Soviet frontier prior to his June, 1941, attack, and Japan struck China with a force of about 1.7 million.  Soviet Russia,  which attacked Finland in 1939, between 1936 and 1940 boosted military outlays by 400%; Germany, between 1933 and 1940, hiked military spending from 2% of national income to 44%. In moves echoing the spending barrage of the above-cited dictatorships, the U.S. between 2001 and 2011 boosted Pentagon spending by 81%, according to the Stockholm International Peace Research Institute(SIPRI).

While Iran’s “nuclear threat” is made out by U.S. media to appear to menace the world, in reality Iran has no nuclear bomb stockpile while Israel is estimated to have between 150 and 300 nuclear weapons and the U.S. is said to have 20,000. As far as overall military spending goes, Iran ranks 25th among all nations, spending $7 billion a year, just one percent of the extraordinary $711 billion Americans lavish on the Pentagon. This outlay makes America the foremost military spender of all time, a nation whose arms budget is the equal roughly of all the nations of the world combined. As for Israel, it ranks 18th, and SIPRI lists its military budget in 2011 as $13 billion, nearly twice that of Iran.

Finally, it behooves us to look at the pattern of aggressive military actions of the past 50 years by the parties being reviewed. Israel has begun several wars against its neighbors while the U.S. has attacked Viet Nam, Panama, Nicaragua, Afghanistan, Iraq, Libya, Yemen, Somalia, and others. Additionally, the CIA is said to have overthrown more than two dozen governments. In the same period, the number of countries attacked by Iran is zero.

Question: if your country was ringed by 40 military bases on which the world’s most powerful and most aggressive war-maker had parked nuclear weapons, and whose military spending overmatched your own by 700 to one, wouldn’t you have to be crazy to launch a war of aggression against it or its Israeli ally?The charge that Iran represents an “existential threat” to Israel appears to be a gross twisting of the historic record and relevant military evidence.