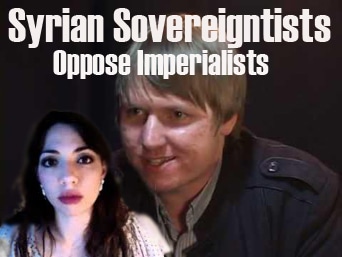 Over the past couple of weeks I’ve had the pleasure of acquainting myself with a segment of the vast Syrian community who oppose the ongoing covert interventions in Syria and who generally think their current government is doing a good job, all things considered. An intrepid citizen journalist named Michelle Robinson drew my attention to a network of marginalized pro-Assad Syrians based in my city of residence, Calgary, Alberta. Whereas most activists in the West have been hoodwinked by the Zionist-influenced media into blindly supporting the broadly defined “Syrian opposition” my fellow Calgarian had the independence of mind to seek out these opposers of the opposition who offered a more nuanced — and in my view reasonable — analysis to the Syrian debacle.

Michelle artfully produced a series of You Tube interviews with these Syrians, many of whom are receiving hostility from well-funded, well-protected Islamist groups which, for ideological reasons, oppose the Assad government and it’s many supporters. When they call the police to report the death threats they’ve been receiving these Syrians get asked “are you pro-Assad or anti-Assad?” With the Canadian neocon government funding anti-government elements in Syria it is not surprising that these Canadian-Syrians who endorse the Syrian government feel that they are being unjustly treated by the Canadian state and it’s supposed “law enforcement system.” Indeed these Syrian patriots even went so far as to insinuate that the Canadian state was consciously nurturing Islamist groups in order to import the Middle East’s sectarian problems into Canada which would have the effect of making Canadians more likely to view the world through Israel’s anti-Arab spectacles.

I also went to interview these pro-government Syrians at an undisclosed location and was thoroughly moved by their compelling testimony. These Syrian sovereigntists contend that there are reactionary terrorists destabilizing their country at the behest of the US, Saudi Arabia, Qatar and Israel. These, often non-Syrian, terrorists are being characterized as “human rights activists” by the mainstream media in the West because Israel and its stooges in the US government benefit from a terrorized, factionalized Syria. These Syrians are thus grateful that their government led by President Assad is using the military to weed out the insurgents who are, literally, killing their family members and destroying their nation. They legitimately fear their country degenerating into civil war and internal sectarianism.

All of those I interviewed emphasized the fissiparous nature of Syria, with it’s eighteen different ethnic groups that are unified by the current government led by the largely secular President Assad. Of course, a comparatively secular government that unites disparate ethnic groups and stands up to the Zionist colonizer, that has illegally occupied the Golan Heights since 1967, is anathema to imperialist interventionists.

I have been very skeptical of the so called “opposition protests” I’ve seen taking place here in Calgary and elsewhere in North America. I am skeptical of any protest that gets ubiquitous, positive coverage by the mainstream media as is invariably the case with these pseudo-revolutionary rallies. The pro-government Syrians informed me that while they had been interviewed multiple times by media venues such as the Canadian Broadcasting Corporation, those interviews had not been broadcasted.

The failure of the media to report their majoritarian perspective on Assad and Syria was a real source of contention for them. I was the first journalist they had encountered who actually intended to relate their perspectives to his readers, they told me. One would have thought that those liberal activists who attend the anti-Assad protests in North America and Europe would have felt conflicted by the fact that their perspective was zealously promoted by the same media venues that sold us the war on Iraq, the Israeli genocide of Palestine and a host of other imperialist initiatives.

It appears that many leftist activists who’ve been supporting the reactionaries who are destabilizing Syria have a kind of nihilistic philosophy that “anything is better than the status quo.” They support the reactionaries who are jeopardizing Syrian sovereignty premised on their belief that anything is better than an Arab strongman. Zionist liberals have encouraged us to blame Israel’s enemies for the strife in the Middle East rather than blame the most egregious threat to Middle East peace and stability, namely Israel. Leftists fear being called “anti-Semitic” and so refrain from identifying the imperialist agenda of an ethnic-nationalist apartheid state and instead direct their wroth at one of that state’s last remaining nemeses, President Assad.

During the Cold War anybody who opposed the Communist camp was supported by the US government and its allies even when those people were right-wing, capitalist restorationists or white pro-apartheid forces that would make things much worse for the inhabitants of communist nations. Many left-anti communists threw their hats in with aristocrats like Vaclav Havel who sought to implement a regime of privatization on nations that had made several strides to move beyond capitalism to a more humane social order. Likewise today Western governments and their liberal apologists are supporting any group, no matter how reactionary, that opposes the only leader who offers an obstacle to US-Israeli imperialism in the Arabic speaking world. And as was the case with left-anti-Communists in the Cold War, left-Zionists are promoting an agenda that will worsen the lot of the ordinary worker in the beleaguered nations.

Many on the left would rightly support Hugo Chavez using his military to restore Venezuelan sovereignty in the event that agents of imperialism were destabilizing Venezuela; why apply a different standard to the Assad government which is using its military to restore peace and order to the working class neighbourhoods that are infested with Mossad and CIA sponsored patsies? Who is selling out the working class Syrian and who is really concerned about their betterment? It would appear that many liberals and Starbucks-sipping revolutionaries have been fooled, yet again, into supporting an imperialist project that will potentially lead to the slaughter of millions of Syrians.

It is well documented that the Israeli government aspires to destabilize the Middle East so as to weaken the Arab states in a divide and conquer policy that would facilitate regional hegemony for Israel. This prerogative to break down the Middle East ensemble into ethno-religious statelets was documented most notably in Oded Yinon’s “A Strategy for Israel in the 1980s“. Yinon’s geopolitical analyses evolved into what many scholars have identified as the Sharon Doctrine. In other words this imperialist worldview has its roots in the Likud Party whose leader Bejamin Netanyahu is the the current Israeli Prime Minister. Yinon argued that Israel’s successful divide and rule policy in Lebanon offered a blueprint for a pan-Middle Eastern Israeli foreign policy. Yinon ominously wrote:

“The Western front, which on the surface appears more problematic, is in fact less complicated than the Eastern front, in which most of the events that make the headlines have been taking place recently. Lebanon’s total dissolution into five provinces serves as a precendent for the entire Arab world including Egypt, Syria, Iraq and the Arabian peninsula and is already following that track. The dissolution of Syria and Iraq later on into ethnically or religiously unqiue areas such as in Lebanon, is Israel’s primary target on the Eastern front in the long run, while the dissolution of the military power of those states serves as the primary short term target. Syria will fall apart, in accordance with its ethnic and religious structure, into several states such as in present day Lebanon, so that there will be a Shi’ite Alawi state along its coast, a Sunni state in the Aleppo area, another Sunni state in Damascus hostile to its northern neighbor, and the Druzes who will set up a state, maybe even in our Golan, and certainly in the Hauran and in northern Jordan. This state of affairs will be the guarantee for peace and security in the area in the long run, and that aim is already within our reach today.”

Jonathan Cook has written a whole book on the subject of Middle East balkanization which is aptly entitled Israel and the Clash of Civilizations: Iraq, Iran and the Plan to Remake the Middle East. Stephen Sneigoski likewise documents the Israeli plan to balkanize the Middle East in his book. Sneigoski states on page 50 of his Transparent Cabal: “With Likud’s assumption of power, the most far-reaching militant proposals entered mainstream Zionist thinking, involving militant destabilization of Israel’s neighbours and Palestinian expulsion.”

Having lapped up the moving testimony of the pro-Assad Syrians in Calgary I sought out a new star of the internet, who has adopted the moniker “Syrian Girl”, to hear her analysis of the strife in Syria. Syrian Girl defies so many stereotypes that have been constructed to dehumanize Arabs, Persians, Syrians and many other groups in the Middle East. This dehumanization process is a necessary prerequisite for the premeditated Zionist genocide in the Middle East.

With the precision of a brain surgeon, Syrian Girl, who I am calling the “Flower of Syria”, unpicks the lies and myths which have been propagated by the neocon lie machine. Her analysis is both incisive and inspiring and helps to demystify the Syrian conflict which in turn helps to counter a nefarious Zionist policy that jeopardizes the lives of millions of her fellow countrymen. Syrian Girl is a true philosopher of the struggle for decolonization cut from the same cloth as Frantz Fanon, Nelson Mandela, Patrice Lumumba and Che Guevara. I think we should recognize that Syrian Girl and her fellow Syrian patriots in Calgary are being very courageous by speaking out against the Western-backed sabotage and subterfuge that is taking place in Syria. It is time that left wing activists confront the realities of power and look beyond the liberal window dressing which imperialists decorate their colonial intrigue with.

There was a day when empires cloaked their iniquitous subventions with the moralism of “christianizing the natives”. “Civilizing the natives” was a claim that went hand in hand with the rise of racist social darwinism from which the ideology of Zionism emerged. The emerging Israeli empire and it’s US adjunct slyly and adeptly convinces liberals to support genocide and civil war in the name of “democratization”. “Democratization” is the moral justification for imperialism du jour.

It is quite obvious that the Israeli government hopes the inhabitants of the Middle East will kill each other off sufficiently for Israel to erect a formal empire in the Middle East. Syria is a perfect patchwork of ethnic groups for this divide and rule policy to be prosecuted. Just imagine the false-flags the Mossad are cooking up to build upon those they’ve already been accused of conducting in Egypt’s Coptic churches.

The three part You Tube series of Syrian Girl and I speaking can be seen below.