Home Veterans Israel’s Persecution Of Christians In the Holy Land 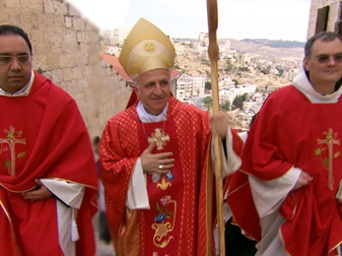 (CBS NEWS) The exodus from the Holy Land of Palestinian Christians could eventually leave holy cities like Jerusalem and Bethlehem without a local Christian population. Bob Simon reports.

Why are they leaving? For some, life in the middle of the Israeli-Palestinian conflict has become too difficult.

The following script is from “Christians of the Holy Land” which aired on April 22, 2012. Bob Simon is the correspondent. Harry Radliffe, producer.

Christians of the Holy Land 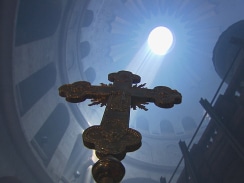 This is what the Holy Land looks like today. Bethlehem, where Jesus was born. Nazareth, where he grew up. Jerusalem, where he died and where Christians believe he was resurrected. Nazareth is inside the state of Israel. Bethlehem is on the Israeli-occupied West Bank. The Christian section of Jerusalem is also under Israeli control.

We know the area well — know that it is arguably the most fought over piece of real estate in the world, sacred to half of humanity. Still, when we decided to do the story last year, we did not realize our story would become so controversial.

Our story begins in Bethlehem, where it all began. We went to Saint Catherine’s in the Church of the Nativity.

For local Catholics, this is their parish church. The day we went, a confirmation was underway. Father Marwan Dides, a Franciscan, led one child after another up to the altar, watched by proud parents. The church was so crowded it was difficult to believe that Christians now makeup only 18 percent of what was for centuries an overwhelmingly Christian town.

Father Dides: We are the living stones of the Holy Land. From here, it all started. And it had to continue. It’s a must. It must continue. If there is no people, no Christians here, it will never continue.

Here in Jerusalem, the numbers are even bleaker than in Bethlehem.

Theophilos the third, the patriarch of the Greek Orthodox, has lived through the decline. His church, the Church of the Holy Sepulcher, is the most sacred site in Christendom. He took us up to the roof. You’ve got to know a patriarch to get here.

Theophilos: Come in. You are inside the Holy Sepulcher. Just inside here is the tomb.

That is the tomb which covers the site of the resurrection.

Bob Simon: When you first came here in 1964, what was the percentage of Christians in the old city?

Theophilos: There were around 30,000 of– Christians living in the Old City.

Bob Simon: And now how many are there?

Religious leaders are afraid Jerusalem could become a museum, a spiritual theme park, a great place for tourists and pilgrims, but not for the Arab Christians whose roots date back to the church’s very beginnings.

Mitri Raheb: Christianity started here. The only thing that Palestine was able to export so successfully was Christianity.

Mitri Raheb is a Palestinian, a Christian and a Lutheran minister from Bethlehem. He runs schools, cultural centers and health clinics.