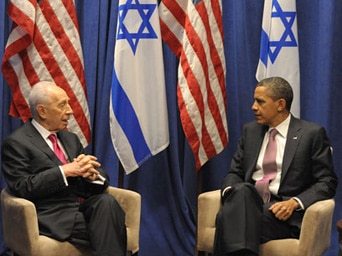 ‘Thanks’ to The Patriot Act, all of my overseas communications are potentially monitored and I have been in contact with Gaza and Syria; but most likely the communications I have sent to Israel’s Nuclear Whistle Blower, Mordechai Vanunu [since 2005] have also been monitored by Israel’s SECURITY/Mossad/Shabak, for Vanunu remains under 24/7 surveillance in east Jerusalem, “waiting” for his “freedom now!”

“Today, 21 April, is the eighth anniversary of Mordechai’s release from prison, when the annual restrictions on his freedom come up for renewal. We call for these restrictions to be lifted and for him to be allowed to leave Israel.”

Two days later, Vanunu recommended the following Youtube, which he published three years ago with the comment: “May this Tsunami will check little bit the new US president OBAMA. May OBAMA start doing some real actions for the freedom and abolition Atomic weapons.”

I asked Vanunu, “What do you say to Obama TODAY?”

Vanunu readily replied “My message to Obama, Vanunu is very supporting Obama policy, Obama Ideology of a Middle East Free from all Nuclear weapons. Vanunu is ready to help Obama in this. Diplomacy Now!!! Freedom Now!!”

In his 2012 speech to AIPAC, President Obama announced he would award The Presidential Medal of Freedom to Israeli President Shimon Peres this summer.

The award is intended to recognize individuals who have made “an especially meritorious contribution to the security or national interests of the United States, world peace, cultural or other significant public or private endeavors”.

Obama said Peres has “been a powerful moral voice that reminds us that right makes might, not the other way around.”

“Very few leaders if at all were able to change the mood of the entire world in such a short while with such profound impact. You provided all of humanity with fresh hope, with intellectual determination, and a feeling that there is a Lord in heaven and believers on earth. Under your leadership, peace became a real and original agenda. And from Jerusalem, I am sure all the bells of engagement and understanding will ring again. You gave us a license to dream and act in a noble direction.”

In 1994, Yitzhak Rabin, Yasser Arafat and Peres were all awarded the Nobel Peace Prize for playing a part in achieving the Oslo Declaration of Principles. According to the preamble of the DOP, peace was to be based on mutual respect and reconciliation.

Alfred Nobel’s intention was to reward people with a moral backbone and he hoped to create icons and examples to humankind.

I had hoped President Obama would have seen his Nobel Prize as a mandate and he would also have held Israel accountable for its nuclear deceptions, omission, obfuscations and human rights abuses against Mordechai Vanunu–who was 9 years old in 1963, when the Zionists came to his home town of Marrakesh, Morocco.

The Zionists convinced his father to abandon his thriving general store and pack up the first seven of eleven children for the land of milk and honey. Instead, the Vanunu’s were banished to Beersheva, one of between 400-500 Palestinian villages Israel has ethnically cleansed since 1948.

President Obama, is now the third sitting American president to win the Nobel award, and his peers include Mikhail S. Gorbachev, who won the Peace Prize for helping end the Cold War which raged from 1945 to 1991, and Nelson Mandela, who fought for the end of Apartheid in South Africa.

The apartheid regime in South Africa existed from 1948 until 1994; but it was not until the late 1980’s that the American government got on-board with the over twenty years of a global call for boycott, divestment and sanctions that finally brought that apartheid system to its knees.

On October 2, 2009, The Washington Times reported that “Obama agrees to keep Israel’s nukes secret [and] reaffirmed a 4-decade-old secret understanding that has allowed Israel to keep a nuclear arsenal without opening it to international inspections.”

On April 5, 2009, President Obama stood on the world stage in Prague and admitted, “As the only nuclear power to have used a nuclear weapon, the United States has a moral responsibility to act…When we fail to pursue peace, then it stays forever beyond our grasp. We know the path when we choose fear over hope. To denounce or shrug off a call for cooperation is an easy but also cowardly thing to do. That’s how wars begin. That’s where human progress ends…the voices of peace and progress must be raised together…Human destiny will be what we make of it…Words must mean something.”

Vanunu gave us a license to dream and act in a noble direction, when he told the truth about Israel’s nukes 26 years ago, as he wrote from Ashkelon Prison:

“This struggle is not only a legitimate one – it is a moral, inescapable struggle…no government, not even the most democratic, can force us to live under this threat. No state in the world can offer any kind of security against this menace of a nuclear holocaust, or guarantee to prevent it.

“Already now there are enough nuclear missiles to destroy the world many times over. This issue should unite us all, because that is our real enemy.

“Is any government qualified and authorized to produce such weapons.” [Ibid]

In April 1999, thirty-six members of the US House of Representatives signed a letter calling for Mordechai Vanunu’s release from prison because they believed “we have a duty to stand up for men and women like Mordechai Vanunu who dare to articulate a brighter vision for humanity.”

Many voices of peace and progress have been raised over the years and all that has been lacking is the political will to do the right-meaning correct things.