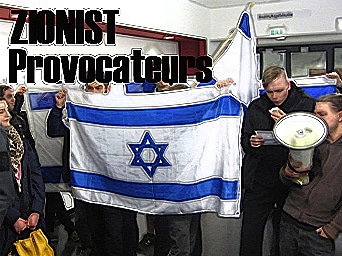 By our correspondents  / World Socialist.Org

On Tuesday, the International Students for Social Equality (ISSE), the student organization of the Socialist Equality Party (PSG), held the third in a series of meetings titled “Defend Günter Grass”.

As was the case in previous meetings in Frankfurt and Berlin, Tuesday’s meeting in Leipzig was subjected to a huge and coordinated provocation. In alliance with right-wing Zionist provocateurs, a representative of the student council at Leipzig University closed down the meeting prematurely.

At the start of the meeting, a group of right-wing opponents of Grass sought to gain entry. They denounced the author of The Tin Drum and Nobel prize winner as an anti-Semite and tore up leaflets advertising the meeting. There was no doubt they were intent on disrupting the event, and the organizers of the meeting refused to allow them to participate.

A short time later another group of aggressive Zionists turned up bearing Israeli flags, a banner with the inscription “Stop the mullah regime” and a megaphone. They attempted to disrupt the meeting from outside by loudly chanting “Long Live Israel” and “Down with the mullahs”. When this failed, the crowd of about 60 provocateurs gathered in front of the door to the meeting room and pounded on the door and walls.

On a number of occasions they physically attacked stewards and sought to forcibly invade the meeting. One of the hooligans shouted out: “Does anyone have an ice pick here?”, an obvious reference to the 1940 assassination of Leon Trotsky by a Stalinist agent using an ice pick. 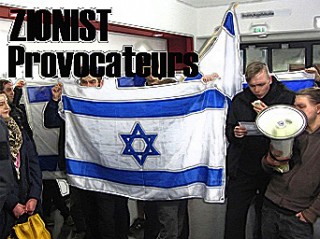 When the meeting continued despite these attacks, a leader of the right-wing provocateurs read out a statement over a megaphone in the corridor outside the meeting. He began by braying: “Our intention was to read out this statement inside the ISSE meeting, but if we cannot get in, then I will read it out here.”

He called Grass a “notorious anti-Semite” who had already made clear where he stands by having briefly served in the SS as a 17-year-old at the end of World War II. Grass’ assertion that Israel was preparing a military first strike against Iran was nothing more than the repetition of the “anti-Semitic attacks made by the Iranian mullahs’ regime on Israel.”

He described Israel as a “shelter for the Jews” which had to be defended by all military means against “global anti-Semitic madness”. His argument was based on a grotesque distortion of history, aimed at exploiting the crimes of the Nazis and the Holocaust to justify and support the aggressive war policies of the US and Israeli governments.

At that point, two representatives of the student council, Marcel Wodniock and Jacob Heuschmidt, arrived. They demanded that the ISSE stewards move away from the door to allow the provocateurs access to the meeting. In an absurd argument, they invoked democratic principles, tolerance of dissent and free access to all public events to justify the complete disruption of the meeting and likely physical assault on those taking part.

Marcel Wodniock has studied law and knows that free access to public events does not mean allowing access to organized groups armed with banners and a megaphone who are clearly intent on violently disrupting the meeting. On the contrary, the organiser has the obligation to provide for the orderly running of the event and refuse entry to those clearly intent on provocation.

Wodniock lined up with the right-wing provocateurs and demanded that they be allowed to enter the meeting. The ISSE stewards countered by arguing that the right of assembly was a basic democratic and constitutional right. The student council is therefore obliged to defend a meeting approved by the university against provocateurs.

Wodniock responded angrily. He claimed that he would decide whether the meeting would continue and not the ISSE. To the cheers of the provocateurs, Wodniock declared the ISSE event to be over. Together with some pro-Israel thugs, he pushed stewards aside, stormed into the meeting room, pulled the plug of the PowerPoint presentation and demanded that the audience leave the room immediately.

Many participants reacted indignantly. Mathias, who had attended a lecture given by David North on Leon Trotsky and the defense of historical truth just a few weeks earlier was outraged. He had not thought such an attack on democratic rights was possible “here on the campus of the university”, he said. The lecture hall in which North had addressed an audience of more than 300 is located in the same building of the Leipzig University.

Even after the event, participants were harassed and attacked by the right-wing provocateurs. The ISSE announced that it will oppose the violent disruption of its meetings and called upon all those in attendance to intensify their defence of Günter Grass and the right to free speech.