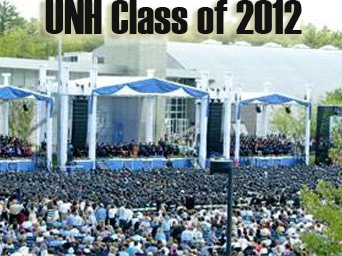 I’ve always wanted to give the commencement address at my Alma mater, The University of New Hampshire, so I finally decided that this was the year ~ so here it is, Class of 2012: Allen L Roland, Class of 57 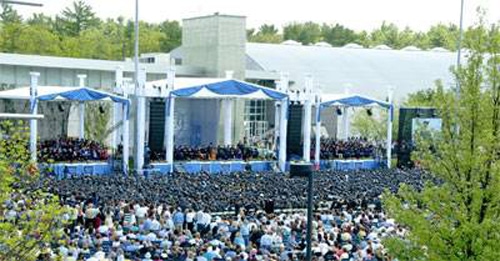 Distinguished guests, faculty and UNH graduates ~ it is a distinct honor to be standing on this blue and white decorated podium today and deliver the commencement address to the class of 2012.

55 years ago I was one of you and perhaps feeling the same excitement and jubilation that many of you are feeling today ~ but there was another feeling I felt that day; it was a profound twinge of awareness that there was nothing I could not accomplish if I set my mind and heart to it.

Two years prior to my graduation, at the end of my sophomore year, I came to the sad realization that my hotel management major was totally wrong for me, I was not the least bit interested in managing my step father’s hotel in Miami Beach and had neglected my true interest in English Literature and the Arts.

I had spent most of those first two years having a great time partying with my friends, hosting a nightly campus jazz radio show ( The Rock Roland Show ) and dating as many beautiful girls as possible. I vividly remember driving my black hearse (with my name on the side) on to this very same playing field during half time of a football game with people hanging all over it and a keg of brew sitting on its roof ~ I was something else!

I didn’t pledge a fraternity during those two years and had a small single room in one of the dormitories ~ I would describe myself as fairly self centered, emotionally immature and somewhat lost.

However, once I gave up making a career choice to please my step father and switched my major to my real love, English Literature and the Arts ~ my world changed.

My friends changed also as I excitedly plunged into a new curriculum heavy with Arts and English Lit courses. I had a lot of wasted time to make up for and I was taking a heavy class load to accumulate the units I needed to graduate. So I began to write, I began to paint; I began to sing; I took a piano lesson from TakeLessons on jazz chord structure so I could develop a piano style that was uniquely my own. My inspiration was Errol Garner, a self taught genius whose childhood exuberance and joy was expressed in all of his music and particularly his own composition ~ Misty.  4 minute Video:

So I played like Errol with his lagging base line, diminished chords and crashing discord endings and adapted that to my own arrangements. I was still having fun but was now beginning to share my gifts with others. My best friend was Shawn Malloy and Shawn convinced me to pledge his fraternity Phi Mu Delta in my junior year. I’m still grateful to Shawn for pushing me in that direction ~ because I emotionally needed that caring group of brothers and they enthusiastically accepted and supported my music, energy and projects. They, along with the house mother, became the supportive family I never truly enjoyed as a young child. Phi Mu Delta was easily the most attractive building on Fraternity Row and, at that time, had the reputation of housing the campus gifted or perhaps strange ones ~ not so much athletically gifted but intellectually and creatively gifted. I had found my home.

For example, my senior art project was a series of paintings of a famous rock on the shore of Nahant, Massachusetts ~ Castle Rock. I created three huge paintings ~ one was realistic, another was semi-abstract and the third was totally abstract but all were a different medium and all had to capture the essence of that rock.

My fraternity brothers, who I entertained almost every night with my house musical trio, suggested I use the huge basement wall to create the abstract fresco of that rock ~ which I did much to their delight and at times amusement and eventually to the astonished pleasure of my senior project acceptance committee.

The only teacher I vividly remember from my time at UNH also became an inspiration to me. He was a substitute teacher who was teaching Shakespeare. Shakespeare was like music to me and he lived Shakespeare as well as all the great poets.

“ If music be the food of love, play on; Give me excess of it, that surfeiting,
The appetite may sicken, and so die.
That strain again! it had a dying fall:
O, it came o’er my ear like the sweet sound,
That breathes upon a bank of violets,
Stealing and giving odour! Enough; no more;
‘Tis not so sweet now as it was before. O spirit of love! how quick and fresh art thou,”

The gift he gave me and the class was the gift of him living his dream and sharing and celebrating that gift from a place of deep joy and delight. He was my greatest teacher because he fully gave the gift of himself ~ and became an inspiration for me to do exactly the same thing in my on going work with others, both as a psychotherapist and writer.

I was a voracious reader at UNH and devoured Steinbeck, F. Scott Fitzgerald and Hemingway but as a child I also loved Jack London and this London quote could eventually be my epitaph ~ “I would rather be a superb meteor, every atom of me in magnificent glow, than a sleepy and permanent planet. The proper function of man is to live, not to exist. I shall not waste my days in trying to prolong them ~ I shall use my time”

As I began to grow in self acceptance and discover and share my artistic gifts ~ my tough and armored Rock Roland shell began to disintegrate and I gradually became the Allen L Roland I am today ~ but it wasn’t a painless process.

It was here at UNH that I also fell in love and was emotionally shattered when the object of my affection returned to a former love and I was left weeping in my fraternity house mother’s arms. Thank God I allowed myself to feel that deeply because, in so doing, I tapped into a far deeper level of feeling and creativity that profoundly manifested itself eventually in my work, writing and poetry.

I did not graduate with honors ~ far from it, for I barely accumulated enough units to be standing on the stage where you will soon be receiving your diploma.

But I did graduate with the acute awareness that I was prepared to live my dreams, whatever they were, and fear and self doubt would not stop me.

I believe it was W.H. Murray who wrote ~ “I have learned a deep respect for one of Goethe’s couplets: Whatever you can do or dream you can, begin it. Boldness has genius, power and magic in it!”

I graduated into a troubled world in 1957 ~ the Vietnam conflict was just over the horizon and the draft was facing me. With my college degree, I embarked on another dream ~ to become a Navy carrier pilot. I signed a five year service extension and entered the Navy Aviation Officer Candidate program and within two years was assigned to the West Coast and was flying F3H supersonic Jets on the USS Ranger off the coast of Japan and China ~ I was once again living my dream.

Eventually I found the courage to fully open my heart and live my deepest dream ~ to re-discover the truth of a joyful state of love and soul consciousness that I once knew as a child and utilize it in my everyday work as a psychotherapist especially with Veterans with PTSD. I have not found great wealth in finding this field of psychic energy and consciousness, that exists beyond time and space as well as beneath our deepest fears ( a Unified Field that physicists, scientists and dreamers have and are still searching for ) but I have found immense satisfaction in proving its existence to myself and countless others.

I prove its validity every day in my work and if you Google “ The Unified Field “ ~ as I see many of you are now doing ( chuckle ) ~ you will see my Unified Field   perched in the #1 position, after Wikipedia’s definition of the Unified Field Theory, with well over 1 million results.

In other words, dear soon to be fellow graduates of UNH ~ I’m making a difference and that’s all I’ve essentially ever wanted to do on this brief journey to planet Earth.

The words of William James would seem to sum up my feelings as I enter the last chapter of my life ~ while you coincidentally are just finishing the first chapter of yours; “ I am done with great things and big things and great institutions and big successes, and I am for those tiny invisible moral forces that work from individual to individual, creeping through the crannies of the world like so many rootlets or like the capillary oozing water, yet which, if you give them time, will bend the hardest monuments of human pride.”