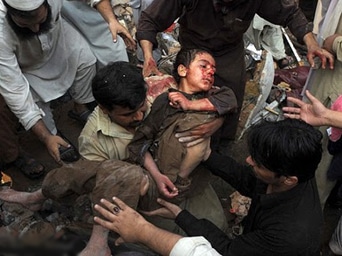 May 6, 2012—Although President Obama’s top counter-terrorism adviser says caution is exercised when making drone attacks, official U.S. announcements often state that suspects are killed. This very word betrays the fact that every drone attack is a crime because it is illegal in any civilized society to kill suspects. The killings are murder, pure and simple.

(Only last week, Washington announced it killed four “suspected militants” by drone attack in Pakistan, resulting in a formal protest from Islamabad “strongly condemning” the killings. “Such attacks are in total contravention of international law and established norms of interstate relations,” the Pakistan statement stressed.)

And the Washington Post quoted a Pakastani government official who reminded: “When a duly elected democratic Parliament says three times not to do this, and the U.S. keeps doing it, it undermines democracy.”

Presidential adviser John Brennan told a group of academicians at the Woodrow Wilson Center, “We only authorize a strike if we have a high degree of confidence that innocent civilians will not be injured or killed, except in the rarest of circumstances,” Charlie Savage of The New York Times reports in the April 30th edition.

But Brennan acknowledged “instances when — despite the extraordinary precautions we take — civilians have been accidentally injured, or worse, killed in these strikes. It is exceedingly rare, but it has happened. When it does, it pains us and we regret it deeply, as we do any time innocents are killed in war.”

Exceedingly rare? As Juan Cole of the University of Michigan observed in “The Nation” magazine, the Britain-based Bureau of Investigative Journalism(BIJ) found “not only are civilians routinely killed by U.S. drone strikes in northern Pakistan” but “often people rushing to the scene of a strike to help the wounded are killed by a second launch.” Presumably, some of these victims may include medical personnel and relatives.

The BIJ estimates the U.S. has killed some 3,000 people in 319 drone strikes. Of these, 600 were civilian bystanders and approximately one in four of those were children.

“At the very time Brennan made his speech, there emerged further confirmation of CIA ‘signature strikes’ that were launched at people who allegedly may be engaged in a pattern of activity that could somehow suggest their involvement in some form of terrorism on the basis of dubious intelligence,” said Francis Boyle, the distinguished professor of international law at the University of Illinois, Champaign.

“These ‘signature strikes’ are indiscriminate and thus illegal and war crimes. And the fact that all these drone strikes constitute widespread and systematic war crimes mean they also constitute Crimes against Humanity as defined by the Rome Statute for the International Criminal Court and customary international criminal law,” Boyle added.

“Obama, Brennan, Petraeus and the CIA operatives involved must be held criminally accountable for these war crimes and Crimes against Humanity in Pakistan, Yemen, and Somalia, inter alia,” said Boyle, author of “Tackling America’s Toughest Questions”(Clarity).

Obama, who presents himself as the doting father of two daughters, is systematically and criminally taking the lives of other parents’ children in his blind passion to destroy his enemies. He has radically stepped up drone attacks over his predecessor, George W. Bush, and makes no apologies for their commission. The drones are now so “hot” in the Pentagon arsenal that manufacturers cannot keep pace with the demand for them. The U.S. has 7,000 unmanned aerial vehicles, Cole writes, which it has deployed in strikes in six countries under direction of the CIA and Pentagon.

Cole points out the drone strikes are largely carried out in places where no war has been declared; neither has any Status of Forces Agreement been signed. “They operate outside the framework of the Constitution, with no due process or habeas corpus, recalling premodern practices of the English monarchy, such as declaring people outlaws, issuing bills of attainder against individuals who offend the crown and trying them in secret Star Chamber proceedings.”

“The only due process afforded those killed from the air is an intelligence assessment, possibly based on dubious sources and not reviewed by a judge,” Cole writes. “There is no consistency, no application of the rule of law. Guilt by association and absence of due process are the hallmarks of shadow government.”

Of the 3,000 slayings in Pakistan by drone strikes, writes Bill Van Auken on Urukunet, only 170 victims have been identified as “known militants.”

According to Van Auken, Brennan told his Woodrow Wilson Center audience, “The constitution empowers the president to protect the nation from any imminent threat of attack” but that assertion “is a lie.” Van Auken explained, “As U.S. officials acknowledged, Sunday’s attack in Pakistan was directed at elements who were allegedly preparing not to attack the US, but rather to resist the US military occupation of Afghanistan.”

The accelerating drone strikes are only one aspect of the emerging covert operations that were once a minor arrow in the national security quiver, “The Nation” writer Cole states, but today are “the cutting edge of American power.”

(Author Sherwood Ross is a Miami-based public relations consultant “for good causes” who writes on political and military topics. He formerly reported for the Chicago Daily News and worked as a columnist for wire services. Reach him at [email protected])