Home Government What Kind of Society Do Americans Want? – An Analysis (9 May... 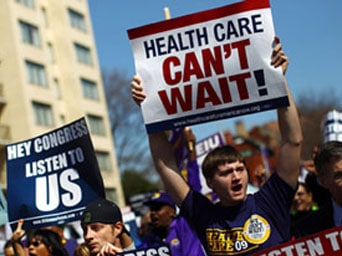 Part I – Health Care in the USA

On 7 May 2012 a new study came out on healthcare in the United States. Based on research carried out by the Urban Institute, the report is published in the journal Health Affairs. Here are some of its findings:

What all this means is that health care in the U.S. has deteriorated in the first decade of the 21st century. That was also reflected in a 2005 study by the World Health Organization that ranked the United States (supposedly the richest of nations) as 141st in government spending on health. Perhaps not unrelated, the U.S. ranks number 1 in the world when it comes to anxiety disorders.

Part II – The Philosophy Behind the Decline

This situation reflects a culture-shaping philosophy that has persisted in this country, with but brief interludes, since its founding. That philosophy teaches that we all are, or should be, rugged individuals. We should take care of ourselves and not rely on others. That is our responsibility in life and if someone can not measure up its their problem, not society’s.
Where does this attitude come from? There are no doubt multiple roots, but one source is an historically deep-seated national dislike of taxation. From the first moment of revolution against Great Britain, freedom meant escaping imperial taxes. Americans of that day claimed that only elected local legislatures could rightly lay down taxes. The claim was made, in part, because within such a localized system taxes could be kept to an absolute minimum.

This attitude toward taxation is, in turn, at the heart of the original capitalist outlook as it evolved in the 18th century. According to this perspective there are only three things for which the government can rightly tax its citizens: national defense, internal security (including the court system) and the enforcement of contracts. Beyond that the government must leave people alone and that includes not “over taxing” them and not regulating any of their business affairs.

This philosophy has caused untold misery since its inception. For the first century of the industrial revolution when the government of Great Britain (the original industrializing nation) was controlled by people who wanted minimal taxation and no business regulation, working class people lived in dire poverty, environmental pollution was rampant, industrial safety was non-existent, and health care for the poor was the concern of private charity only. Why? Because for the government to address any of these concerns would cost money and that would mean raising the taxes of the folks who had money.

It took over one hundred years of labor organizing, strikes, riots, outbreaks of preventable diseases, and the incessant pestering of elected officials by that small minority of the population who thought all this was a scandal (mostly women and religious folks), to force politicians (kicking and screaming) to address social needs and enforce health and safety related regulations. The Great Depression beginning in 1929 forced the issue with a vengeance and led to larger government and the “welfare state.” In other words, it led to a sense of social responsibility on the part of Western governments–most reluctantly the U.S. government. In America, that lasted through the 1970s and then the situation reversed.

One would think that memory would serve us for more than a mere forty odd years. That after suffering all the misery brought on by 19th and early 20th century capitalism we would have learned that to achieve social peace and a modicum of general prosperity, the government must perform important community functions including supplying all its citizens with decent and affordable health care.

But no it hasn’t worked that way. In 1981 Ronald Reagan became president. He started the process of deregulation and shifting taxation away from the rich. Others, including Democrats like Bill Clinton, followed along. When recently Barack Obama proposed health care reform he was labeled a socialist. Now, just listen to Mitt Romney and his Republican cohorts. Just listen to the Tea Party cabal. Just listen to Fox News. All of them want to go back to the “good old days” of minimalist government and minimum taxes. By the way, in the midst of those good old days, about the year 1843, the median age of death in the industrial city of Manchester England was 17.

Part III – What Kind of Society Do Americans Want?

This leads us to the question, just what sort of society do Americans want? Indeed, do they want a meaningful society at all?. Why not just stick to family units or small tribes drifting about in a state of nature? Well, in a sense that is what we chose to do. The tribes have become larger and today we call them nation states. But in the American version, localism makes for myriad sub-tribes. In the state of Pennsylvania, where I live, the people in the relatively rural center of the state as well as those in the urban suburbs, not only care little for those living in cities such as Philadelphia and Pittsburgh, they actively dislike them. They don’t feel like they live in the same society. And they certainly don’t want to be taxed to help an urban population with a lot of poor folks. In others words, whatever sense of social solidarity rural and suburban Pennsylvanians feel, it does go much beyond their own local community (or “tribe”). And Pennsylvanians are by no means unique in this country

The fact is that, in terms of social conscience, the U.S. is still quite a primitive place. And this primitiveness is sustained by a philosophy of selfishness. Among other things, that prevailing philosophy is making an ever greater number of us unhealthy. Is this acceptable to most Americans? Is thos the kind of society they want? The political practice since 1981 seems to answer, yes.