Home Government US Has Always Been a Bully 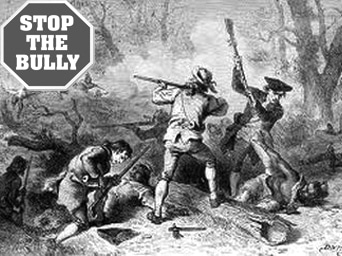 America has always been a bully. Americans are convinced that they have a God-given right, or destiny, to expand the country’s borders from “sea to shining sea”.

“The land of the free and the home of the brave” was conquered with complete disregard for the rights of America’s original inhabitants.

Full of expansionist tendencies, Americans engaged in wars throughout the entire world and became involved in foreign affairs where their participation was unwelcome.

Native American Indians welcomed the Pilgrims with open arms, unaware that increasing numbers of settlers would cost the natives their land and lives.

With all that stolen land, white American bullies needed slaves that ships brought from Africa to work the land.

In a war with Mexico, the western settlers stole Texas. Eventually, large northern portions of Mexico, including California, Nevada, Arizona, New Mexico and Utah were occupied and ruled by Americans.

By the middle of the 19th century, America decided to force Japan to trade with the U.S. Japan had to accept the U.S.A.’s terms or face naval bombardment.

Due to strong U.S. expansionist sentiment at the end of the 19th century, another conflict broke out between Spain and America. This time the U.S. wanted Spain’s territories of Cuba, Puerto Rico, The Philippines, Guam and the Caroline Islands.

A large part of the 20th century saw widespread hatred and persecution of communists and foreigners with the U.S. engaged in military conflicts in Vietnam in the 1960’s and 70’s.

America’s history of conquests is beginning to resonate with another, more recent, history: that of Israel.

When Israel has thoroughly isolated the remaining Palestinians on small reservations by American bullying tactics, where will they expand next?

Is there any reason to believe that the Israelis won’t continue to use the American model of occupation and rule? What will Israel use as a continuation of “The War on Terrorism”? Israel’s hawks and the Zionists in America want Iran decimated.

What do Israel and America need to consider before further bloodthirsty expansion?

First, they rely on proficiency in weapons manufacture and military tactics. In the past, they have always been one step ahead of the nations and people they were trying to conquer.

Next, their conquests have never been based on victory alone, but on total and complete subjugation. Herein have been the difficulties with leaving Vietnam, Iraq and Afghanistan.

America and Israel have involved themselves in an ever-growing military escapade in the Middle East, spreading it with the help of scare tactics and lies.

With America, it has been the threat of terrorism. With Israel, the bogus need for greater self-defence.

Deciding to take military action by disregarding U.N. disapproval and on ridiculous and unproven grounds, America and Israel qualify as the bullies of our time.

It’s time for America to grow up and let Israel deservedly take the condemnation as the world’s chief bully. What should America do?