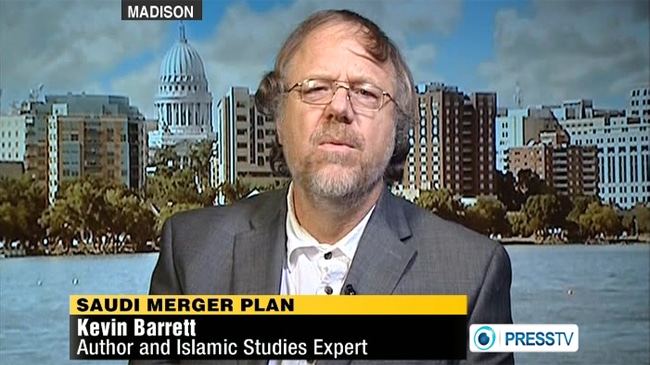 I was interviewed on Press TV yesterday. Below is a rough transcript.

War against Muslims started even before 9/11

Reports about a Virginia military course that taught officers to prepare for a total war on Islam indicate the US right wing agenda even before 9/11, an analyst tells Press TV.
Press TV has interviewed Dr. Kevin Barrett, author of ‘Questioning the War on Terror’ about the orchestrated campaign against Islam since September 11th, 2001.

Press TV: The Virginia (military) course that was mentioned there in our report has also warned officers between the link of the Muslim Civil Liberties Advocacy organization, which is known as CAIR (Council on American Islamic Relations) and other such groups, and Hamas, which is referred to as the enemy.

Why have these rights groups been targeted?

So, this leads us to the real reason for this wave of Islamophobic hysteria that’s swept over the USA since 9/11 and that is, to sum it up – September 11th was a coup d’etat by extreme right wing forces in the US military particularly with dispensationalist Christian extremists at the top of the Air Force.

It was overseen by Cheney and the Israeli MOSSAD with its assets in the New York crime scene blew up the World trade Center… and deceptively blamed it on Muslims to launch a war against the religion of Islam.

Today, with these recent revelations, we are only beginning to learn – not we… people like me have known this for a long time, but others that have been in denial about the reality of what really happened on September 11th have just begun to learn how absolutely insane these extreme right wing forces in the USA are.

The good news is that they are being rooted out. The Chairman of the Joint Chiefs of Staff, Martin Dempsey has been one of many professional leaders in the US military who are unhappy about the September 11th coup d’etat and the War on Islam. And they are slowly, but surely rooting out these crazed Islamophobic forces.

And yes, these Islamophobes are absolutely committed to going after anybody that defends Islam in any way including those who are using the freedom of speech granted under the US Constitution to defend the religion of Islam.

Press TV: You’ve written a book on the War on Terror and I’d like to bring this issue up with you, our guest in Washington was suggesting there that this is a war on Islam that has been supported by three sides and this is not just a non-profit organization maybe in the US giving out an extreme view on Islam, but this is a policy that is entrenched in the government and is part of the policy.

Sometimes we even think when we see for instance reports of Qu’ran burning in Afghanistan Islam are attempts to test the nerves of Islam community. What do you think this war on terror is about and has it become, on the ground, a war on Islam?

Dr. Barrett: Actually, the guest in London was absolutely correct that this does go back to before 9/11. I think the war on terror actually began in 1979 at the Jerusalem Conference on International terrorism (JCIT). Netanyahu summoned George H W Bush and Scoop Jackson who was the leading Senate military budget guy and other big time movers and shakers in the US military establishment and policy makers to Jerusalem.

And at that Jerusalem conference on International Terrorism in 1979, before the Cold War was over, they laid out a plan to replace communism with terrorism as the next great enemy.

Now, terrorism should have been put in quotes because what was really going on was that Netanyahu and his people were setting Islam up to be the next great enemy of the West. Why is that? Because Islam – well, not so much the religion of Islam, but the world’s 1.5 billion Muslims is the obstacle to Greater Israel.

The Zionists have been stealing more and more land; butchering more and more people; pushing their ethnic cleansing harder and harder all the time. The hardcore Zionists want to take the whole of the Middle East for themselves. They want everything from the Nile to the Euphrates and they want to dominate the rest of it.

And in order to do that they basically have to go to war with Muslims because it so happens that the people who live in that part of the world are Muslims. So the war on terror is really a disguised war on Islam on behalf of radical Zionists led by Benyamin Netanyahu who started the whole thing with the Jerusalem conference on International terrorism back in 1979.

Press TV: Suggesting a nuclear attack to justify the destruction of the holy cities of Medina and Mecca we’ve heard, Dr. Barrett, it does sound completely radical and we never hear any official trying to justify it let alone repeat it, but nonetheless, how effective are these kinds of ideas in promoting extremist behaviour towards Muslims?

Dr. Barrett: Well, unfortunately they are effective within a small group of extremists who have become ensconced in certain parts of our military as well as some of the Zionists. There are plenty of liberal Zionists who are somewhat horrified by this kind of extreme rhetoric, but who let it pass and  are willing to go along with it because it serves their interests.

Now, we need to step back here for a moment and talk about what would have happened here in the US if for instance we had heard that a US military teacher had drawn up these official documents saying that we might need to have a total war against Jews, on the order of let’s say Dachau and Auschwitz.

The US Constitution has a clause, which says that all religions must be treated equally – that’s our First Amendment. And so, here in America we need to wake up and put a stop to this kind of extreme Islamophobia that wouldn’t ever be accepted if it were directed against any other group.