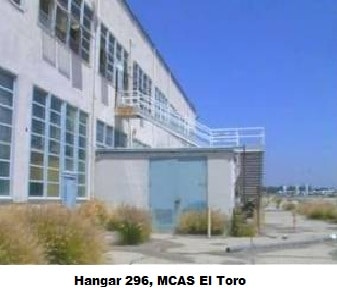 MCAS El Toro was closed in July 1999 and has been on the National Priority List (EPA Superfund) since 1990.

Based on a media request for information on the status of the old hangar, Charlotte Fadipe, Chief of Media & Press Relations for DTSC, reported that “DTSC has not released Hangar 296 for unrestricted use. The hangar is currently shuttered and no uses of any king are allowed by the Navy.”

Roy F. Weston, Inc., (Navy contractor) reported in July 2002 the hangar free of radiation and that the Navy had taken steps to dispose of radiation contaminated materials off-base in a designated waste hazardous site.

The area previously occupied by the Radium 226 paint room and supporting  rooms was converted to administrative work space and used by Marines in the 1960s and possibly until the base closed in 1999.

Marines who worked in the north mezzanine of Hangar 296 may be at risk of exposure to Radium 226 and its radioactive decay products.   Radon, a decay product of Radium 226, can enter the olfactory channels and pass directly to the brain. This has been confirmed through studies of DU aerosol used in the Gulf War, according to Dr. Rosalie Bertell, a public health expert who has consulted with the EPA and the Nuclear Regulatory Commission.

For veterans, the only definitive test to rule out radiation is a chromosomal blood breakage test for rings and dicentrics, according to Dr. Rosalie Bertell.  Dr. Bertell said that there are two government laboratories with the capability to perform this test:  The Armed Forces Radiology Research Institute, Bethesda, MD and the Oak Ridge Institute for Science and Education, Oak Ridge, TN.

Since El Toro was designated for closure in 1999 and reversion to state control, the California Department of Public Health (CDPH) under an agreement with the Nuclear Regulatory Commission assumed responsibility for monitoring radiological issues at the former base.

The CDPH did not agree with 2002 Weston report and refused to release the hangar from its restricted radiological category. Follow up with CDPH showed that the state had concerns with the Weston radiological survey of the hangar.

Specific details about the state’s concerns were not available. However, one possibility is that the plumbing under the Radium 226 paint room was contaminated and the old sewer line may be contaminated with radiation. If this is the case, it could cost the Navy millions to dig up the old sewer line and disposed of it in a hazardous waste site.

At the end of January 2012, the Navy submitted a radiological site inspection work plan to CDPH. Once the CDPH and the Navy agree to a final work plan, the Navy will proceed with the work, submit a final inspection report to CDPH who will make a determination if the hangar is fit for unrestricted radiological release or some kind of remedial action is warranted.

Radium 226 has a half life of 1,620 years. So even after 16 centuries half of the contaminant will still be active. Obviously, this is not something you want in your backyard.