In a separate email, he also reassured me:

…what ever you want to do, feel very free to do, I am all the time very OK, until you get any news from me. All the best.  VMJC

When we began conversing in 2005, I put my pen down when Vanunu told me, “The Silence of The Lambs” was about him.

Because I did not write down any of those stories that then flew out of him, I won’t repeat any. But I will reiterate that I was not a reporter when I met Vanunu, and had only stumbled across his name a few months before, while researching for my first book.

However, my degree is in nursing and I had been a Stephens Minister, so I knew to just listen to him. I never asked him a question and all the while I felt that Vanunu should not be sharing these stories with a writer he had only met a few days prior, but with a friend, sister, mother. Or an expert in psychological torture.

When I asked Vanunu to email me along with his US friends, so I could pass off DVD copies of our first taped interview Vanunu Mordechai Speaking to Florida US,June 2005, to them [I had not yet established my website] he replied, “Goggle Vanunu” to locate them.

He meant Google-and that was the first [but not the last] time that I wondered if Ricky Ricardo had been born in Morocco, might he have sounded like Vanunu Mordechai?

Among the very first words Vanunu spoke on 21 April 2004, moments after emerging from 18 years in a windowless tomb sized cell, was to call his supporters “heroes” for standing by him:

Via the Internet, I did locate a few of Vanunu’s heroes who lived in Berkeley just three weeks after meeting Vanunu. I was in town to attend Tikkun’s [Hebrew for mend, heal, transform the world] first spiritual political activists conference in Berkley:

Three of them had been among the many who were there when Vanunu was released from prison in April 2004, but by July 2005, not one was interested in my DVD copy of Vanunu’s message to G. W. Bush as to where in the Middle East he actually could find WMD’s, nor did anyone care to hear how Vanunu’s Christianity helped get him through 18 years in prison, most all in solitary confinement.

However, I did learn that for over nearly two decades thousands of global citizens had petitioned governments and many raised funds and kept Vanunu’s name in the press. During his 18 years of incarceration, Vanunu received thousands of cards, letters and gifts from strangers who admired his solitary action and grieved his ongoing suffering.

But, Vanunu disbanded his US Campaign after a year of walking the streets of east Jerusalem, talking with hundreds of supporters, friends, strangers and foreign media- who contributed to charges against him in Israel’s first freedom of speech trial- [and all are culpable in Vanunu’s 78 days back in solitary confinement in the summer of 2010] Vanunu was dealt another blow that has been repeated annually ever since- the draconian restrictions that deny him the right to leave Israel continue.

When I saw Vanunu in 2006, I asked him why had he disbanded the group and Vanunu replied that as he was free enough to speak for himself-even if he was not allowed the freedom to leave Israel which is all he wanted-he saw no need for any organization.

“All governments are run by liars and nothing they say should be believed.”

“If God, as some now say, is dead, He no doubt died of trying to find an equitable solution to the Arab-Jewish problem.”

“The only kinds of fights worth fighting are those you are going to lose, because somebody has to fight them and lose and lose and lose until someday, somebody who believes as you do wins. In order for somebody to win an important, major fight 100 years hence, a lot of other people have got to be willing – for the sheer fun and joy of it – to go right ahead and fight, knowing you’re going to lose. You mustn’t feel like a martyr. You’ve got to enjoy it.”

There have been times I have enjoyed the struggle of being the only reporter in the world documenting Vanunu’s ongoing saga, but it also has been torture being a woman who knows too much:

In “an appeal against the state which Vanunu had lodged in 1998, while still in prison…a doctor testified in Beersheba District Court that Vanunu suffered from chronic paranoid schizophrenia.”

I am not a doctor, but I am married to one and he tells me that any human subjected to the psychological and emotional torture and sense deprivation that Vanunu endured would suffer a break with reality within ten days- if not ten hours!

Vanunu did not break from reality until his first appeal was denied after five years of solitary confinement. From 1986 to 2004, Israel kept Vanunu in a tomb sized cell without windows. A harsh light over his head burned 24/7 and a camera documented his every move.

When Vanunu did nod off to sleep, “A guard would come and shine a brighter light into my face and say, ‘Just checking if you had committed suicide yet.’”

Vanunu spent nearly twelve of his eighteen years in solitary confinement, and when released from solitary, he was forbidden to mix with Palestinians. Vanunu would not mix with the Israeli prisoner population for fear of his life and he ate alone for 18 years.

I shot this photo of Vanunu the last time I saw him in June 2009: 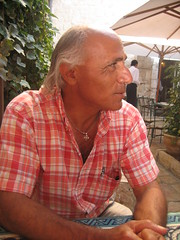 He was living in the same dilapidated hostel he moved to in 2007. It cost him around $10.00 a day and provided a bed, shower and a toaster where he cooked an egg in the morning and a hamburger most every night. He also was attending two church services on Sundays and on Wednesday’s he had dinner and played coed volleyball with friends.

On 8 August 2010, Vanunu began 78 days in solitary confinement -Israel’s punishment for his speaking to foreign media in 2004-and a few weeks after his release, Vanunu moved from Jerusalem to Tel Aviv, “to be closer to the airport” and full freedom.
In January 2010, Daniel Ellsberg wrote:

“Mordechai Vanunu — my friend, my hero, my brother — has again been arrested in Israel on ‘suspicion’ of the ‘crime’ of ‘meeting with foreigners.’

“I myself have been complicit in this offense, traveling twice to Israel for the express purpose of meeting with him, openly, and expressing support for the actions for which he was imprisoned for over 18 years…

“Mordechai Vanunu is the preeminent hero of the nuclear era. He consciously risked all he had in life to warn his own country and the world of the true extent of the nuclear danger facing us. And he paid the full price, a burden in many ways worse than death, for his heroic act — for doing exactly what he should have done and what others should be doing.” [2]

President Obama will soon award Shimon Peres a Presidential Medal of Freedom, but my friend, my hero, my brother wrote in 2009, to the Nobel Peace Prize Committee in Oslo:

”I am asking the committee to remove my name from the nominations…I cannot be part of a list of laureates that includes Simon Peres…Peres established and developed the atomic weapon program in Dimona in Israel…Peres was the man who ordered [my] kidnapping…he continues to oppose my freedom and release…WHAT I WANT IS FREEDOM AND ONLY FREEDOM….FREEDOM AND ONLY FREEDOM I NEED NOW.”

On 2 October 2009, The Washington Times reported that Obama agreed to keep Israel’s nukes ‘secret’ and reaffirmed a 4-decade-old understanding that has allowed Israel to keep a nuclear arsenal without opening it to international inspections.

Come June 6th, Israel must respond to Vanunu’s appeal seeking to revoke his citizenship as his way out of a state that has never been a home to him; and his legend will continue to grow until Israel allows him the freedom to fade into the world instead of continuing to make headlines.
Vanunu Mordechai asking ,CANCEL,Revoking my Citizenship-MAY 5-2011.

Learn More: BEYOND NUCLEAR: Mordechai Vanunu’s FREEDOM of SPEECH Trial and My Life as a Muckraker: 2005-2010