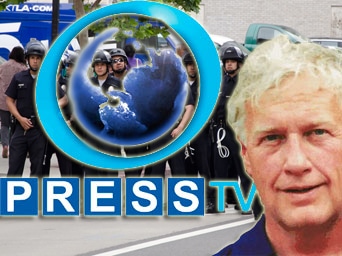 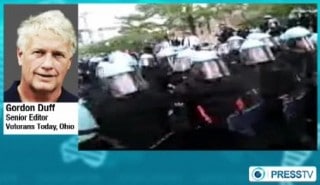 “The clear issue we have on NATO is that from day number one this was an illegal war; those who started this war in the US, Britain and elsewhere did so as a war crime. And if it was a war crime, a continuation of the war by NATO should be looked on as a war crime. It’s the duty of everyone to oppose the war in Afghanistan.”

As the NATO summit kicks off in Chicago, the anti-war activists from across the world gather to voice their opposition to the war and the global warmongers.

Press TV has conducted an interview with Gordon Duff, senior editor of Veterans Today, to further discuss the issue.
The following is a transcription of the interview.

——————————–
Press TV: Public opposition to NATO and its wars is greatly intensified but has it and will it affect the decisions being made at the summit today?

——————————–
Duff: I think we have a break in reality where governments are paying no attention to the public at all. How is, for instance, Russia going to maintain any sort of voice of opposition when very recently they crushed a protest in Moscow, far more viciously than anything we’ve done?
The clear issue we have on NATO is that from day number one this was an illegal war; those who started this war in the US, Britain and elsewhere did so as a war crime. And if it was a war crime, a continuation of the war by NATO should be looked on as a war crime.
It’s the duty of everyone to oppose the war in Afghanistan. There was never a reason to be there; there was never a reason to attack. There’s no reason to stay.
The idea now that our government here in the US is equating anti-war activity with terrorism is only a sign that the United States is increasingly becoming a police state.

——————————–
Press TV: This summit is also marking the activation of the first phase of the US missile system in Europe despite warnings from Russia due to its offensive nature as opposed to what they claim as it being a defensive mechanism. How is that going to play out, in your opinion?

——————————–
Duff: The rhetoric the US is using, militarily, is totally false. When we negate Russia’s ability to respond to an American first strike, which is their claim, we are making them vulnerable to attack. That’s an aggressive move. By saying that Poland is somehow going to be magically attacked by Iran is an absurdity beyond human measure.
Another issue, of course, tied to this is that the system that we’re installing right now is so filled with technical bugs that we can’t depend on in ourselves anyway. The Patriot 3 system has very considerable difficulty discerning warheads from scrap or chaff or other material. The system itself that we’re fighting over is ineffective.
It’s just the idea that we are going to use it and install this, really surrounding Russia, it has nothing to do with Iran whatsoever.
What we’re doing is we’re trying to return to the years of the Cold War to continue justifying military spending, continue justifying the presence of NATO — and these people calling for an end to NATO are very realistic.
NATO’s mission is at an absolute end. We learned this in Libya. NATO’s participation in Libya was a farce. I think it should have declared a death nail for NATO.

——————————–
Press TV: Speaking of which, Afghanistan is going to figure greatly in the summit, you touched upon that earlier. Rasmussen has already said that there will be no early withdrawal other than that of France’s.
How unified, do you think, are other member states over this behind closed doors, specifically in light of their own economic and political issues that they have to grapple with at home?

——————————–
Duff: The issue primarily is the US ability to apply leverage. Zardari from Pakistan is allowing US supplies through. Why? -Because he’s avoiding prosecution for laundering drug money in Switzerland.
As far as Karzai, Karzai will keep Americans there because every two weeks he does the same game. America has to leave, we bring him a suitcase of money, then America gets to stay.
If we’re gone, the suitcases of money stop. Anyone that thinks that isn’t true, and who doesn’t know that’s true, knows nothing about international affairs.