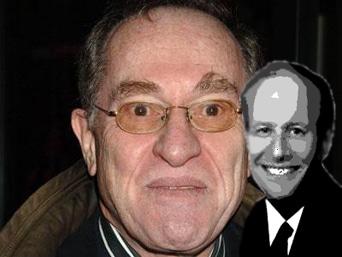 Leading Israel-first American Jews held an illuminating debate about American politics and Israel’s future recently. It is available for all to see at the link below, Watch the two debates between the non-aggressive leader of J-Street, Jeremy Ben Ami, and the arrogantly aggressive Bill Kristol and Allen Dershowitz, then read the account at Mondoweiss, a website billing itself as featuring “the war of ideas in the Middle east.”

It won’t take long for VT readers to see the glaring omission in this debate. How can Israelis anywhere complain that Palestinians and Persians want to “drive them into the sea? When the core philosophy of Jews is the racist Talmudic separation of all Jews from all other humans, whom they consider to be cattle?

Obviously, it is this ‘we are the chosen’ chutzpah that is the basic flaw underlying all the hatred, wars and Massacres like Gaza in recent decades and terrorism by Irgun in the early days of the forming theocracy,which was a huge political manipulation by the Banker-dominated West.

In case you sayan shills and bloggers wish to try tarring me for using “code” by calling it “banker-dominated,” I do mean Jewish-dominated. It’s not code, it’s historic truth.

If anyone misconstrues my citing of fact in this column as attempting to arouse hate against Jews—you just don’t get it either—the cosmic double-standard was not my idea, and I consider any person who knowingly claims to be a Jew, Israeli-firster commits a hate crime against the world.

Folks like me are passionately opposed to corrupt, tyrannical government and the “collective” mentality, as contrasted with the cooperative mentality. I have, perhaps too much so, empathy and compassion for fellow humans who also have the same toward me.