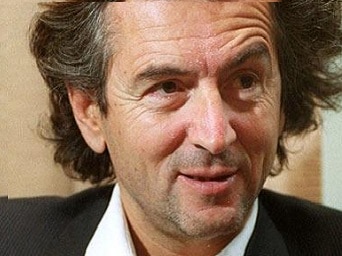 There are hundreds if not thousands of “Jews” who enriched our lives and that of humanity with their talented contributions to the arts, to the literature, to music, to cinema, to science, to medicine, to physics, to sociology and psychology, to freedoms, to civil rights and liberties and law, Bernard-Henry Levy is not one of them. he is full of it.

At the recent Cannes Film Festival, Bernard –Henry Levy who thinks of himself as modern day Voltaire and was able to get the French media to proclaim him as the “philosopher” of France, was on one his many ego trips, presented his own documentary about the Libyan revolution “ Le Serment de Tobrouk” or “ The Oath of Tobruk” narrated, directed by himself and of course were he was the central figure of the documentary, dashing in the desert with his crisp summer suit, a modern day Lawrence.

Mr. Levy of course takes credit for the Libyan revolution and for having made the Libyan revolution possible through his close relationship with the former French president Nicolai Sarkozy and his close associations with many Zionist oriented leaders in Europe and in the US who decided to get NATO involved. Adding insults to injury, Mr. Levy compares the uprising against the criminal Qaddafi with that of the march of Zionism against Palestine and its ethnic cleansing program. How can any Libyan accept such an insult, I do not know?

Mr. Levy does not miss a chance to argue that only foreign military interventions in the Arab world can bring democracy to the people. It seems Mr. Levy believe in killing Arabs first before they learn democracy. It seems he did not get it in Iraq with more than 300,000 Iraqis dead as a result of the American invasion, and the more than 4 millions made homeless and refugees in Iraq and outside of Iraq.

To give credit to himself he accompanied few of the Libyan fighters to Cannes and also arranged for couple members of the Syrian opposition to come along to argue for foreign military intervention is Syria, to repeat the Libyan story all over.

Of course Bernard-Henry Levy always introduces himself as “friend of Israel” and that he is. He is a loyal dedicated Israeli loyalist masquerading in French colors, not so different from the likes of Alan Dershowitz, Daniel Pipes, Elliot Abrams who dedicated their lives and their positions to Israel-First.

More disgusting and it seems it was overlooked by his friends and associates in Tripoli and Benghazi that Mr. Levy love for Israel not Libya is the driving force behind his claimed efforts on behalf of the Libyan uprising.

Mr. Levy is Zionism and Israel’s emissary for the normalization of relationship between the “Arab Spring” countries and Likudist Apartheid Israel and it seems he is making head ways, and shamefully with some of the military “commanders’ in Libya and with some of the Syrian opposition tagging along as stupid fools.

Though I am not an expert on France, I did live for most of the last 30 years overseas and I think I know France and French politics more than the average American, having followed French politics since 1980 with my frequent and continued business trips to Paris since then.

Of course watching French television on a daily basis helps a lot, with its much more informative and quality programs unmatched by CNN or Fox News. Not so sure what is the contribution of this “philosopher of France” Mr. Bernard-Henry Levy to French society or for that matter to the world, a fraudulent invention.

Mr. Levy who argued for military intervention in Libya is arguing for the same in Syria, stood silent, with no sense of moral shame or respect for humanity when his friend” Israel” leveled Gaza with its ground and air attacks with cluster bombs and phosphorous bombs that destroyed tens of thousands of homes, scores of schools and hospitals and deliberate targeting of families in their own apartments with its tanks.

Mr. Levy for sure qualifies for the “Ugly Jew”. Of course there are so many ugly Muslims, Christians, Jews, Arabs, Americans, certainly Russians and many others too many to count.

Sami Jamil Jadallah is not an expert on French affairs, but he did stay at the Holiday Inn.