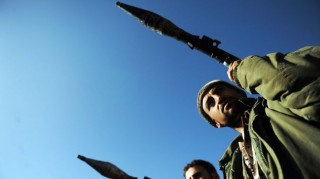 Syria is bracing for more political chaos as all antagonistic forces appear to have entered into an unholy alliance to bring the government to its knees by ingeniously choreographing massacres and attributing them to Syrian government, thereby turning the country into fertile soil for US-led invasion.

Deadly clashes broke out on Friday between Syrian forces and armed groups in the township of Houla in Homs and claimed the lives of 108 people including at least 32 children according to the head of the UN observer mission in Syria. However, Syrian authorities on Sunday denied having a hand in the carnage.

“Women, children and old men were shot dead. This is not the hallmark of the heroic Syrian army,” Foreign Ministry spokesman Jihad Makdesi told reporters in Damascus.

Makdesi said the massacre was carried out by “terrorists” after fighting between rebels and forces loyal to al-Assad.

“They (rebels) were equipped with mortars and anti-tank missiles, which is a quantitative leap,” he said.

Violence is spiraling drastically despite the presence of 260 UN observers who are currently monitoring the ceasefire as part of a six-point peace plan proposed by UN-Arab League envoy Kofi Annan in March.

Earlier this month, 55 people were killed and about 400 others injured in two strings of terrorist bombings near a military intelligence building in Damascus.

What deserves due attention in the carnage that happened in Houla is that many were shot dead at close range, many were Shia Muslims and many were women and children. In other words, these atrocities are conjectured to have been carried out at the hands of the extremist Wahhabis and al-Qaeda elements who are notorious for targeting women and children in their terrorist operations.

Another element which reinforces this speculation is that many among those who were killed were Shia Muslims for whom the Wahhabis nurse inveterate loathing. Despite the prevailing trend in western media to rule out the possible presence of the al-Qaeda in the country, the presence of al-Qaeda terrorists is gradually gaining strength in Syria. They are believed to have penetrated the country from Iraq, Jordan, Turkey and Lebanon.

Washington is funding the rebel groups in Syria. A report reveals that the rebels in Syria “have begun receiving significantly more and better weapons in recent weeks, an effort paid for by Persian Gulf nations and coordinated in part by the United States” (The Washington post, ).

“We are increasing our nonlethal assistance to the Syrian opposition, and we continue to coordinate our efforts with friends and allies in the region and beyond in order to have the biggest impact on what we are collectively doing,” said a senior State Department official, one of several US and foreign government officials on the condition of anonymity.

Besides, Washington is pressing Qatar and Saudi Arabia to fund and provide the rebels with heavy weaponries.

This behavior on the part of Washington runs counter to the fact that many rebels are linked with al-Qaeda and that the US claims to be fighting terror group.  Along with Washington, the British government acknowledged early in March that it has provided an extra 2 million to the Western-backed rebels fighting the Syrian government. Prime Minister David Cameron told a hearing at the House of Commons Liaison Committee that his government had provided cash and equipment to western-backed rebels in Syria in the name of emergency medical supplies and food.

The government of al-Assad is losing ground thanks to the influx of the extremist Wahhabis and al-Qaeda members and on account of the financial and military support the rebels receive from the West and the Persian Gulf regimes.

The noose is getting tighter and tighter and all Washington and the extremists want is an absence of Bashar al-Assad. The implication is not that they are consciously united to topple the government of al-Assad but that they are united in a malicious cause to do so, each with its own benefits to reap. In other words, all these groups are fomenting unrest in Syria, and dragging the country into shreds of despair in their own way. Although these groups may ostensibly be at daggers drawn over different issues, they share one common point: the fall of al-Assad and therefore turning the situation to their own interest.

Metaphorically speaking, Syria is now going through a sea of troubles where there are many opportunists who will readily make the best of the crisis in the country.

Most importantly, Israel is silently and ironically funneling millions of dollars to the rebels in Syria. In fact, Israel is capitalizing enormously on the collapse of Bashar al-Assad government.  The fall of al-Assad in Syria means a lot to Israel. It is in fact tantamount to immense latitude and a capacious place of potency in the Middle East.