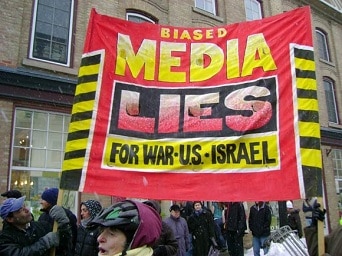 Many people have been shocked by the distortion, propaganda and downright lies appearing in the Western media over events in the Middle East.

But for someone living in the Middle East for 30 or 40 years, the lies are nothing new. The distorted conflicts fly furiously through the corrupt Western media.

When asked “What is the most effective military weapon the Israelis have?” The answer has to be “The control of the Western media.”

The domination of the media was decreed at the Zionist conference of 1897.

Gilad Atzmon, anti-Zionist and ex-Israeli Jew, describes it as the “Zionised Western media.”

The effect of this control dictates to the sluggish Western population which countries they may like and which they must hate.

Seventy-year-old Benjamin Freedman, an American anti-Zionist Jew, declared in a speech presented in 1961, “The Zionists rule these United States as though they were absolute monarchs of this country.”

Freedman declared that in 1916, when Britain was seriously considering a peace offered by Germans, on the basis of a status quo ante, the Zionists seized an opportunity to inform the British War Cabinet that they could still win the war.

They used the same techniques to brainwash the British War Cabinet that they have perfected in the media.

“We will guarantee to bring the United States into this war as your ally. The price you must pay is Palestine after you have won the war and defeated Germany, Austria, Hungary and Turkey.” Britain made that promise in October 1916.

Freedman revealed at that time the United States was totally pro-German; the newspapers…all the mass communication media was controlled by Jews who were pro-German.

When the Zionists saw the possibility of getting Palestine, everything changed overnight. Suddenly the Germans were no good. They were villains (shooting Red Cross nurses and cutting off babies hands. They were Huns.

An insider during this time, and a few years before, Freedman described American President Woodrow Wilson “as incompetent when it came to determining what was going on as a newborn baby.” The same tactics were used in the media. The American people were duped into joining WWI as they were in going into Iraq.

What is notably absent from the information presentation is reportage of Israeli weaknesses and atrocities.

While US networks are virulent in presenting human tragedy, be it through crime, sickness, weather or other catastrophes, there is scant if any media exposure to human suffering caused by wars in Iraq and Afghanistan.

Neglected veterans suffer the cause of divorces, children who have lost parents or parents unable to perform normally.

The American people appear perfectly content about being ruled by the Zionists. They call it their freedom, which they say other countries envy.

Aside from the US media in general, Zionism has permeated Christian churches and the education system.

This brain-washing has gone on for 100 years and is too deeply embedded for Americans to break out and become responsible and even-handed, especially in dealing with the Middle East.

To revisit George Orwell and 1984, it may not be too late to recognize the lies, their source and how they control us:

If the future portrayed by Orwell is avoidable, the rest of the world must break from Western media control of radio, TV, films and newspapers.