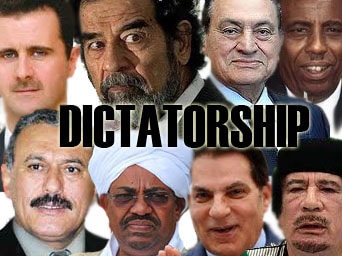 With the on going killing fields of Bashar Assad’s Syria, by now Washington, Tel-Aviv, Moscow, Berlin, Paris and London should know the “inevitable” price of dictatorship. In the same way Damascus, Baghdad, Algeria, Tripoli, Sana’a, Mogadishu, Khartoum, Tehran, Cairo and Tunis know the price of dictatorship. There is always a heavy price paid by the people and nation, later than sooner.

For decades Western powers specially the United States and of course, Moscow as the capital of the former Soviet Union supported criminal dictatorships for reasons that has nothing to do with the rights and benefits of the citizens of these countries but their own selfish and criminal interests.

The United States for and on behalf of Israel always supported Arab dictatorships as a way to provide security and safety for Israel and supported regimes the likes of Mubarak and Ben Ali under the guise of “law and order regimes, ”, first as Anti-Communists and later on as anti-Islamists. It gave material support to Saddam Hussein from the day he came to power in 68 to his 8 years war against Iran, all the way to his invasion of Kuwait and overlooked his killing fields in Halabja and all over Iraq setting the stage for Iraq as a failed state.

The Soviet Union was no different; it supported dictatorships in the Middle East in Syria, Algeria, Libya, Yemen, (at one time) all in the name of “liberation” and as a counter balance to the United States during the Cold War. But then the former Soviet Union always supported criminal regimes thorough out East Europe and Central Asia.

Iraq, Syria, Egypt, Yemen, Libya, Tunisia, Algeria would not be in the mess they are in but for the long time dictatorships that ruled these countries, whether it is individual dictatorship as Barre, Saleh, Ben Ali, Saddam, Mubarak, Assad I and II, Qaddafi or collective dictatorship as is the case in Algeria.

These dictatorships not only ruined the lives of hundreds of millions of people, imprisoned them, tortured them, abuse them, impoverished them, abused them, violated their privacy, but looted the country as they went on to secure law and order for the West and of course “revolutionary” for the former Soviet Union.

By now citizens of these countries should also know the price of silence, the price of not standing up for the criminal regimes ruled by security agencies not for the security of the country but security and longevity for the regimes. The entire state apparatus and all of the resources were put to serve and protect the regimes.

One has to wonder if things could be the same now if the people took to the streets in the hundreds of thousands if not in the millions in the early days of these dictatorship before they solidified their police state. Would Saddam succeed in taking Iraq to ruin, or would Assad pass his regime to his son, or would Mubarak be behind bars, or would Saleh leaves Yemen in ruins, or would Bin Ali loot the country or Qaddafi dies a humiliating death?

One has to wonder how many millions of people would have been saved if America and the West did not provide the political and security covers for such dictatorship and one has to wonder the thousands of lives that could be saved in Syria if Russia decides to walk away from Bashar Assad leaving his fate in the hands of his people and the rope waiting for him?

One has to wonder the trillions of dollars wasted on wars the last 40 years and the millions of people who died and the armament that went up in smoke only to fill the coffers and treasuries of Washington, London, Paris, Berlin, Moscow and Tel-Aviv. One has to wonder the trillions in human capital that was snuffed by 5-cent bullets. Years of family care and decades of educations snuffed because America and Moscow provided covers for these dictatorships.

Others like Libya’s Qaddafi ran the country to ruin with his “Jamahiriya” or “State of the Masses”. Of course Algerian perhaps has the longest running dictatorship with “military” controlling and having all the say so over the National Liberation Front and the Algerian State since independence.

All the blood, the tears, the lost hopes and futures, the exiles, the poverty, the unemployment, the poor run down infrastructures, all the resources of the nation and people were simply wasted and blow away so that Saddam can pass on his kingdom to his kids, and Mubarak can pass his presidency to his son Jamal, with Assad successful in passing his farm to his son Bashar. Qaddafi was killed before he passed his “State of the Masses” to his son Saif. Ali Saleh did succeed in looting the country and passing almost every thing in Yemen to his family while escaping the International Criminal Court.

America and Tel-Aviv gave their full support to the later Shah only to inherit the rules of the Mullahs and the Revolutionary Guards in Iran. What goes around must comes around, with the US paying trillions and tens of thousands of lives as the costs of misguided policies and support for criminal dictatorship.

Let us hope the price of freedom in Syria will not be the same as the price in Iraq and Libya and Sudan. The Palestinian people have to learn sooner than later there is and will be a heavy price they will pay for the dictatorship they call the Palestine Liberation Organization.