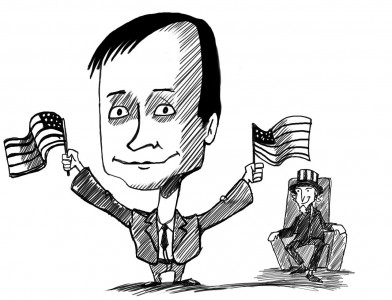 The Merriam Webster dictionary defines the word “lickspittle” as “a fawning subordinate a.k.a. toady”.

Husain Haqqani must be given a standing ovation for redefining this term and giving it a whole new dimension. He embodies a being who will go way beyond, into the literal meaning which comes out as something of “lick what others spit out”. Mr. Haqqani has had the good fortune of serving America as a Pakistani diplomat, a job much in demand these days in other facets of the society as well such as the mainstream media, human rights and politics. A horde of controversies surround this scrappy-wigged eye-bulger. He started out as a right-wing activist with the Islami Jamiat e Talaba, a student wing of the Jamaat e Islami. From there, onto the laps of Nawaz Sharif. Later, he became somewhat of an advisor to Pervez Musharraf and into a great camaraderie with the somewhat leftist Cult of Bhutto, fine emo-vermin known collectively as the Pakistan People’s Party.

Husain Haqqani  sure is a dubious personality. His private life is of no concern to me or anyone else, its his diplomatic adventurism with unscrupulous blabbering in the form of highly beautified and glossy “charm talk”, in seminars or as tweets, which present him as a totally different person; as an innocent fragile bureaucrat who devoted all his career for the betterment of his country and its citizens. Last year, it was reported that Husain Haqqani took $100,000 from the Smith Richardson Foundation to write his notorious novel “Between Mosque and the Military”. You see, lickspittles know the tools of their trade: their character’s retail price can turn out to be high if he is an experienced and professional lickspittle.

Husain Haqqani served the Pentagon’s interests well. This is evident from the fact that among the first aides who rushed to his rescue during the initial Memogate hearing were James Jones and the peskering Bruce Riedel a la CIA. In this regard, Husain Haqqani was also fortunate to have a devoted wife like Farahnaz Ispahani, herself a veteran CIA spin-doctor who worked for the Voice of America’s Urdu language service and also helped set up Anderson Cooper at CNN. With her diverse propaganda skills, she was chosen as the ideal advisor to Asif Ali Zardari on Media Affairs. Anyways, Ispahani’s diverse relations with American media giants helped provide the ‘Iron Dome’ to her husband for a whole year. There was a long pause in the middle and just recently, the Supreme Court of Pakistan passed its judgment: Husain Haqqani did not work for the country’s interests during his office (in short, a traitor) and furthermore, established that it was indeed him who authored the memo against Kayani and Pasha.

Lickspittles have their way of shrugging off “bad times”. When Haqqani’s ‘bad time’ was over just before the long pause till today’s judgment, he was back to uttering vitriol against Pakistan and especially its military. His tweets are laden with taunts and sarcastic shootings against the country’s intelligence service. Till recently, he was heavily retweeting about the supposed death threats which “military intelligence” issued to Asma Jehangir, another fellow lickspittle. Both Mr. and Mrs. Haqqani are the dons of Pakistan’s elite twitterati: they and their wannabe like-minded ultra rich beings rule the roost of Twitter in Pakistan. Not a day goes by without them causing sensation in the online community with their apparent concerns for Pakistan’s well-being. Tell you what, ask anyone on the streets about Husain Haqqani. You will have to block your ears when they start answering.

Husain Haqqani has now been formally announced as a traitor. He did not spare a single undertaking that posed a threat to Pakistan’s stability and security. He served, is serving and might continue to serve his masters well, since his chances of returning to Pakistan and facing the apex court are very vague. He is enjoying his stay in the States, protected by the war-mongering elite who are damaging healthy relations between ordinary Pakistani and American citizens thereby fueling immense hatred here for what America’s true principles of statehood stand for.

One must learn faithfulness from Mr. Haqqani. Lickspittles in Pakistan and those based overseas look upto this great fearless chum for motivation and inspiration. It’s not easy being a hero, absolutely not.

Zaki is a geopolitics and security analyst based in Lahore, Pakistan who has a keen interest in the study of Open-Source Intelligence and Psychological Warfare. He covers the global scenario with a special emphasis on the MENA and Asia regions at large. He has a Bachelors degree with majors in French, Journalism and Education from the University of Punjab.

His brief independent profile can be viewed here: http://cuttings.me/users/zakikhalid

Besides contributing to VT as a columnist, he is the Director General at Terminal X (www.terminalx.org), Pakistan’s most authoritative portal on defence, intelligence and geopolitics. TX is considered an authority on references from the Pakistani military and intelligence developments, having been taken on air by TVN Chile, Iran’s Press TV and Radio Channel Islam International (South Africa), to name a few.