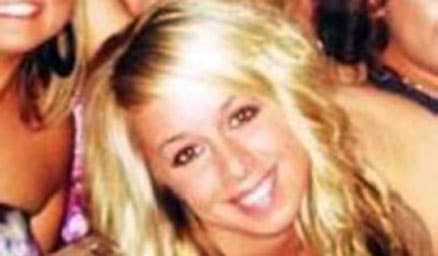 Death is inevitable but when it suddenly takes away a young shining light, as it did my granddaughter Kaitlyn through a tragic accident, it is an instant reminder that we are all put here a little time to sing our song and bear the beams of love:

Death is a tall dark stranger ~ who always arrives when you least expect it.

Its cold forbidding presence rides on the chariot of the unknown.

However, beneath its ominous gray shroud beats an all encompassing heart for death is but a passage within a loving plan in action ~ a loving plan that exists beyond time and space ~ a flimsy curtain between our present reality and a state of soul consciousness ( the Unified Field ) that is hidden from us until we raise that curtain of fear.

Thus those who we love deeply not only live in our hearts but become part of us forever ~ as my late granddaughter Kaitlyn most certainly lives in my heart.

When I first heard last week of her tragic accidental death from my tearful son ~ I felt as if a light had just gone out in the small galaxy of my loved ones ~ and at only 22 years old.

I really did not know her that well for she was born in 1990 in Washington state and after my daughter went through a painful divorce ~ she lived with her dad’s family in the Spokane area.

I saw her less than five times in her brief time on this planet but I was always touched by her radiant spirit and light. The Tri-city Herald reaffirmed this spirit in their news story last week ;  “ Current and former members of the Heatwave Dance Team at Southridge High School gathered Tuesday to remember one of their own who was killed in an accident in Spokane.

Southridge dance coach Liz Stiles said Kaitlyn Rebstock was a talented dancer and passionate leader who touched two generations of the team ~ through her own participation from 2004-08 and more recently when one of her younger sisters joined the team.

Rebstock, 22, died early Tuesday, and by afternoon, word spread to classmates and friends who came to the school to share their memories and their loss.

“A lot of the kids (from her class) are back from college and they all wanted to be together,” Stiles told the Herald. “She impacted so many people.”

Spokane police said it appeared Rebstock returned home from work about midnight and parked her car at the top of a steep driveway.

Police believe the car rolled backward and Rebstock was pinned underneath when she tried to stop it.

She died at the scene, said the Spokane Medical Examiner’s Office.

Rebstock graduated from Southridge in 2008 and made the honor roll several times, Herald archives showed.

She was a member of the Heatwave Dance Team, which won a state dance title as well as  the 3A Division Hip Hop Dance title while Rebstock was on the team.

Stiles said Rebstock was a leader who inspired and motivated her teammates and was well-loved by classmates.

“She was a beautiful girl. This is an incredible loss,” Stiles said. “From 2004 to now, she has been a part of the school. That’s a lot of Southridge students connected to her. She was an extremely talented, kind, giving girl.”

Kaitlyn was a dancer and when she danced she became a transcendent star whose light touched everyone ~ she was obviously singing and celebrating her own song.

In that regard, we all have a song to sing and eventually true happiness is defined by whether you are singing your own song or someone else’s song.

Most people die with their music still locked up inside them because they never said yes to themselves or allowed themselves to be controlled by fear ~ but Kaitlyn was obviously saying yes to herself.

Singing and celebrating your own song is the ultimate act of love for in singing your own song you become part of a divine chorus which has been patiently waiting for your part ~ and, in so doing, you’re in service from a place of celebration.

Kaitlyn said yes to herself, sang and celebrated her song and made a difference before she unexpectedly and tragically passed on ~ but I’m sure she is now dancing her hip hop and spreading her magic in a much larger universal stage. For she is now fully in a state of soul consciousness, that exists beyond time and space, and in a profound deep personal way I feel even closer to her.

In that spirit ~ here’s a two minute video of Kaitlyn performing with the Heat wave crazy legs dance team at their homecoming game in 2010.