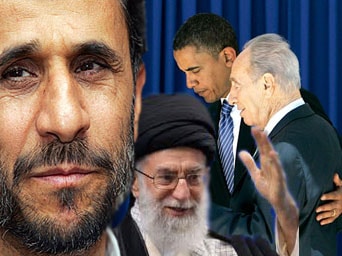 Perhaps President Obama wants to tell Iran something when he decided to award Shimon Peres, the father of the Israeli nuclear bomb, and the killer in Qana 1, the highest civilian honor America can bestow on any one. It is so ironic that this comes at a time when every one from Obama to Netanyahu, to Merkel to Cameron stepping up pressure even threatening war because of Iran’s “suspect” nuclear program. The West almost without exception helped Israel develop its own nuclear program making it the largest in the Middle East coming close to that of the US and Russia.

Shimon Peres sat there and lied to then President Kennedy during a 2nd April, 1963 meeting in the White House when he declared “ I can tell you most clearly that we will not introduce nuclear weapons in the region, certainly we not be the first”. So Mr. Obama also honored a man who lied to the president of the United State.

According to intelligence sources, Israel has well over 400 nuclear weapons including tactical weapons and all the means to delivery including ballistic, artillery, submarine and according to Simor Hersch developed capabilities for “suite case” type bombs which it can leash in Cairo, Damascus, Istanbul, Beirut, Tehran, as well as Paris, Washington, Madrid, and London. The Iranians are not the only crazy in the Middle East.

According to Avner Cohen in his book “ Israel and the Bomb” Israel began to develop its nuclear weapons shortly after its founding in 1948. By hook and more by crook, Israel achieved its goals of acquiring nuclear bombs, with a blind eye and a wink from Washington.

The US was one of many countries to help Israel and the Johnson administration like in the case of Israel attack on USS Liberty decided to overlook the theft of nuclear materials arranged by Israel’s Fifth Column in the US. Simply overlooked the “theft” of highly enriched uranium from the Nuclear Materials and Equipment Corporation in Apollo, Pennsylvania.

It is also ironic that back in 1977, Shimon Peres then the Minister of Defense formed a “partnership” with the late Shah of Iran to develop with Iran surface-to-service ballistic missiles that could be fitted with nuclear warheads. The Israeli-Iranian partnership was duped Operation Codenamed “Flowers”.

BBC Newsnight reported England made “hundreds of secret shipments of restricted materials to Israel in the 1950s and 1960s. Including specialist chemicals for reprocessing and samples of fissile material-uranium-235 in 1959 and plutonium in 1966 and highly enriched litium-6 used to boost fission bombs and fuel hydrogen bombs.”

England through a Norwegian conduit “ Noratom” shipped heavy water directly to Israel, with Israel admitting it is running Dimona reactor with British /Norwegian heavy water since 1963.

France also played a key role in the development of Israel’s nuclear weapon programs with the former French Prime Minister Guy Mollet publicly claiming, “He owed the bomb”. While General Paul Ely, the French Chief of Staff is reported to have said,” we must give this to guarantee their security, it is vital”. It is also noted that Mollet successor Maurice Bourges-Maunoury is reported to have stated “ I gave you (Israelis) the bomb in order to prevent another Holocaust from befalling the Jewish people so that Israel could face its enemies in the Middle East”.

Israeli nuclear scientist had opened and unlimited access to French nuclear facilities with the expectations that French scientists can use and benefits from cooperation with Israeli and Jewish scientists around the world.

With the breakdown of the former Soviet Union, Israel became the primary beneficiary of the immigrations of top Jewish scientist to Israel thus boosting Israel’s not only nuclear bomb programs but delivery as well.

Should Israeli leadership with encouragements and active support from the White House and Congress decides to explode a nuclear device over Iran, the entire Middle and Near East will be gravely impacted from India all the way to Libya and Algeria.

Mr. Obama not only honored the father of the Israeli nuclear weapons program but also honored a man who as Israel’s Prime Minister and in a heated race against Bibi Netanyahu unleashed Israeli defense forces targeting Lebanese civilians who took refuge in a UN base camp in Qana, South Lebanon.

On April 18, 1966 over 106 Lebanese civilians were killed and over 116 were injured when the IDF deliberately target the UN base camp. Of course the US in the person of Nicolas Burn took the Israeli excuse that its army used outdated maps, when it was officially admitted Israel had drone the day before the attack.

In a rebuke to Israel and to the US both Amnesty International and Human Rights Watch faulting Israel with Amnesty concluding Israel intentionally attacked the UN compound.

One has to wonder I which international war criminal will honored next by the White House.