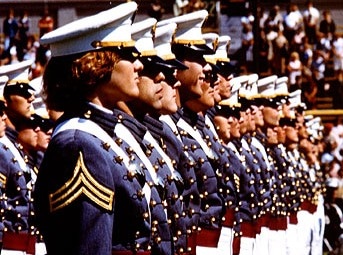 …by  Gordon Duff  and Press TV

It has been discovered that the US military academies, West Point in particular, having been teaching classes for as long as 12 years that openly advocate genocide, population reduction through use of nuclear, biological and chemical war along with open racism and apartheid views.

These schools, churning out the actual war criminals, always unindicted as the US ducks and dives whenever held to account for atrocities that have killed up to 2 million in Central Asia, are unsupervised, operating outside their own honor codes and, in particular, no one has ever come forward.

The “code of silence” includes covering up war crimes, and has created a very real version of the old Stalin Soviet Union’s “butcher academies” here at home, showing that America’s “best and brightest” are little but “bottom feeders” and “dim bulbs,” willing to do anything for a buck.

Why pay $100,000 a year and millions for training when we can hire professional killers from Ethiopia, Peru, Chile or Indonesia?

Worse still, we are turning our sons and daughters over to this gang of half baked misfits.

If we wonder why civilians are murdered, why we torture and kill, the answer is simple, it is taught as official US Army policy, at taxpayer expense, policies that have made the war in Afghanistan go on for a decade, our biggest “loss” since Vietnam, policies that make Obama’s “drone problem” seem like a “walk in the park.”

America spends trillions of dollars on its military.  It is no wonder our major weapons systems, the Patriot 3 missile system, the F 35 and F 22 are totally broken, the truth covered up by academy grads.

No wonder we lose wars, one after the other.  We even wonder if we won World War II?  Modern historians now frame that conflict as one between financial systems, not a political struggle, with the US favoring unstable currencies, a usury based banking system and the “fascist enemy” advocating all the things that the world is now saying it needed to do long ago.

But then there is the holocaust, which we are told of daily by the exact same people who delivered the usury based monetary system.  No wonder questioning the holocaust is a crime in so many countries controlled by powerful banks, countries, every single one of which is bankrupt with mass suicides in many.

The truth? We can’t handle the truth.

‘Everyone at West Point must be investigated  as war criminals’

Gordon Duff is a senior editor at Veterans  Today and in a phone interview with Press TV’s U.S. Desk on Thursday, he  criticized the West Point Military Academy for training officers “to commit  genocide.”

Duff said, “One of the key issues, about the  secret training that our officers have been receiving is that none of us knew  that they were being trained for genocide. That West  Point had openly advocated that American officers should use nuclear  weapons against civilians. That civilians be murdered.”

Duff continued that he did not believe that  officers could be retrained adding that there were a few good people within the  officer corps but there were also many officers who chose to become military  officers because they were unqualified for any kind of civilian life.

“The theme of West  Point is duty, honor, country. There is an oath at West Point. These courses are a violation of that oath.  Anyone who took those courses violated the oath and I believe needs to be  removed from military service … We need to cleanse these military academies,”  Duff added.

“In particular, West Point is the problem. West Point’s inability to stand  with the standards they had set … the inability of anyone, over ten years,  ever to have come public with some of the horrific things that have gone on  there.

“I think we need to take the entire faculty of West Point-everyone who has been in West Point- and have them listed as war criminals at The Hague.

We have to indict all of them; they all have to be investigated as to whether they have been at war, and they have committed genocide since they  have been trained to commit genocide.”