Home Government Declaration of Independence from a War Economy 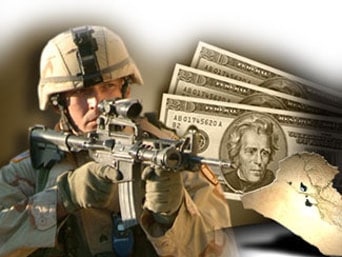 When in the Course of human events, it becomes necessary for a people to dissolve the political and economic bands which have connected them with an industry and a bureaucracy that have held sway over their lives, and to assume an equal station among the peoples of the earth, living free from permanent war in an equal station to people of other nations as the Laws of Nature and of Nature’s God entitle them, a decent respect to the opinions of mankind requires that they should declare the causes which impel them to the separation.

We hold these truths to be self-evident, that all men and women are created equal, that they are endowed by their Creator with certain unalienable Rights, that among these are Life, Liberty and the pursuit of Happiness living in a state of peace. — That to secure these rights, Governments are instituted among Humanity, deriving their just powers from the consent of the governed, — That whenever any Form of Government becomes destructive of these ends, it is the Right of the People to alter or to abolish it, and to institute new Government, laying its foundation on such principles and organizing its powers in such form, as to them shall seem most likely to effect their Safety and Happiness.

Prudence, indeed, will dictate that patterns of Governance long established should not be changed for light and transient causes; and accordingly all experience hath shewn, that mankind are more disposed to suffer, while evils are sufferable, than to right themselves by abolishing the forms to which they are accustomed. But when a long train of abuses and usurpations, pursuing invariably the same Object evinces a design to reduce them under an intolerable War Economy, it is their right, it is their duty, to throw off such improper Governance, and to provide new Guards for their future security.

Such has been the patient sufferance of the people of these United States during seven long decades under a Permanent War Economy; and such is now the necessity which constrains them to alter their former Systems of Governance. The history of recent decades is a history of repeated injuries and usurpations, all having in direct object the establishment of a highly militarized state functioning as a Tyranny over the citizens of these United States as well as to others in many nations around the world. To prove this, let Facts be submitted to a candid world.

They have spent exorbitant sums on wars and munitions, undermining our security by leaving programs to care for our people and environment wanting. They have hollowed out our cities, left our schools crying for funding, allowed our infrastructure to decay, and generally disregarded important governmental functions critical to the security of our nation.

They have even failed to adequately provide for the care of our veterans, so many of whom are suffering from injuries and psychological trauma as a result of their deployments.

They have incurred unnecessary and odious debt, in order to fund the Military-Industrial Complex, cumulatively adding up to trillions of dollars, which will burden our progeny for decades to come, with no benefit to our populace.

They have engaged repeatedly in illegal, aggressive war-making and foreign interventions that have had nothing to do with defending our nation. Our government has entered into a state of war repeatedly, without the constitutionally mandated declaration of war.

They have repeatedly flouted international law that requires that military force be used only defensively or when authorized by the United Nations Security Council. This law, established under a treaty signed by our President and ratified by our Senate, is, under our Constitution, the highest law of the land.

They have repeatedly violated the Nuremberg Principles which hold that aggressive war-making is a Crime Against Peace, and, as such, is the highest form of war crime.

They have sent our young men and women off repeatedly to fight in these wars, leading to millions of casualties, including deaths, injuries, chemical poisoning and psychological traumatization of our military personnel.

They have caused the death, injury, poisoning and traumatization of millions of people in the nations where our government has intervened, doing harm to these people and creating enemies in the process, thus undermining our security.

They have overthrown, or participated in the overthrow of, democratically elected governments in many countries including Iran, Guatemala, Greece, Chile and Haiti, imposing, in the process, brutal, repressive regimes.

They have supported, armed and trained the militaries of, and generally aided numerous unpopular and repressive governments. Our government and military have thus allied themselves with ruling elites and made our nation an enemy to the majority of the people of these countries in the process.

They have created, armed, trained and operated proxy armies to conduct aggressive war-making on behalf of the interests of large trans-national corporations and their allies. This has been done in places like Nicaragua, Angola, Afghanistan, Cuba and many other nations.

They have used the geopolitical power generated through military intervention and force, combined with the economic leverage of the international banking and monetary system, to impose unfair trade regimes on the Global South. In the process, they have hurt not only the people of the developing world, but also American workers millions of whom have lost jobs to outsourcing.

They have repeatedly used Napalm, White Phosphorus and other incendiary weapons in Korea, Vietnam, Cambodia, Laos, Iraq and other countries, causing horrific pain and suffering to combatants and civilians alike.

They have illegally conducted drone warfare, repeatedly attacking, killing and maiming people, including non-combatants, in countries such as Somalia, Yemen and Pakistan, without legal or moral authority to do so.
They have created and maintained vast arsenals of weapons of mass destruction that threaten humanity’s survival. They’ve even used nuclear weapons, at Hiroshima and Nagasaki, resulting in the deaths of hundreds of thousands of civilians. To this day, they refuse to abide by the provisions of the 1968 Non-Proliferation Treaty, which require the mutual elimination of such weapons.

They have produced enormous inventories of long-lived, carcinogenic radioactive waste without any plan as to how to isolate these wastes from the environment for the required hundreds of thousands of years.

They have dispersed dangerous radionuclides into the atmosphere through nearly two decades of above ground nuclear weapons testing, contaminating military personnel and civilians alike. And they have poisoned underground aquifers through predicable leakage of these long-lived wastes.

They have used Depleted Uranium weapons in Yugoslavia, Afghanistan, Iraq and elsewhere leading to the chemical and radiological contamination of combatants, including our own troops, civilians, residential areas, farmland and water supplies.

They have, through the creation of a Permanent War Economy, moved our nation in a direction dramatically at odds with the intention of our founders. More than two centuries ago, President George Washington warned us of the dangers of large standing armies and permanent military alliances. Over the past seven decades, we have ignored this advice, and have paid dearly.

The Permanent War Economy has enriched the few and impoverished the majority. It has contributed to the skewing of income and lead to a dangerous concentration of wealth, power and political influence in the hands of a few. We have seen not just war on other nations, but War on the Environment as well, with corporate powers plundering our seas, ravaging our coasts, destroying our environment and laying waste to the natural resources that belong to us all, and future generations.

In every stage of the growth of the War Economy We and our predecessors have Petitioned for Redress in the most humble terms. We have written letters, made phone calls, met with our Representatives and Senators, held peaceful vigils and demonstrations of all sorts: Our repeated Petitions have been answered only by repeated injury. The Military-Industrial Complex has seen fit to continue its abuses unabated. Their actions make clear that they are unfit to be rulers of a free people.

We, therefore, speaking for the peace loving people of our nation and appealing to the Supreme Judge of the world for the rectitude of our intentions, do, in the Name of the good People of this Nation, solemnly publish and declare, That these United States are, and of Right ought to be Free and Independent of the control and influence of the War Economy; that we are Absolved from all Allegiance to the Military-Industrial Complex, and that all political connection between the people of this Nation and the perpetrators of the War Economy is and ought to be totally dissolved; And for the support of this Declaration, with a firm reliance on the protection of divine Providence, we mutually pledge to each other our Lives, our Fortunes and our sacred Honor.