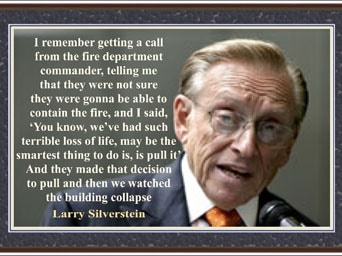 Today’s Wall Street Journal reports that New York governor Andrew Cuomo is “leaning on airlines and their insurers to settle a long-running lawsuit over the 9/11 attacks with World Trade Center developer Larry Silverstein.” When a guy with an Italian name is “leaning on” someone on behalf of a Jewish billionaire…well, I’ll spare you the ethnic jokes.

Larry Silverstein, who allegedly moved into real estate from the illicit sex trade world, bought the World Trade Center six weeks before 9/11, doubled the insurance, and changed it to a cash payout policy. After the WTC was blown up, Silverstein walked into a mobbed-up courtroom claiming double-indemnity for the two completely separate terrorist attacks – the two  planes – and walked out with over five billion in cash on his low-millions two-month investment. The “two planes equals two separate terrorist attacks” ruse led some to wonder about how Jewish lightning could strike twice in the same place.

Then, just to define the word “chutzpah” for all time, Silverstein went back into court asking for another 11 billion dollars. When the insurers balked, it seems he found a guy named Cuomo to lean on them.

Larry is infamous for going on national television and confessing that he participated in a decision to “pull” or demolish World Trade Center Building 7. And yet he collected three-quarters of a billion dollars in insurance fraud money on the premise that WTC-7 somehow just decided to fall down out of sympathy for its big brothers, the Twin Towers.

Andrew’s godfather, I mean father, Mario Cuomo, is famous for his self-righteous indignation about longstanding claims that he’s mobbed-up. “The term mafia is just a slur on Italian Americans,” he once said. (Google “Don Mario Cuomo and the Dope Mob” for details.) If he doesn’t want anyone to notice that he’s mobbed-up, maybe he should tell his kid to stop “leaning on” people on behalf of treasonous Kosher Nostra criminals like Larry Silverstein.