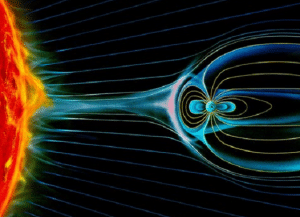 WORLD NEWS TOMORROW – Science-fiction writers have toyed with the concept of a portal for many years, and scientists have been trying to discover such a structure in real life. A new study backed by NASA has revealed the existence of a so-called magnetic portal, connecting the atmospheres of the Earth and the Sun.

Usually, a portal is defined as an opening through spacetime that enables a traveler to move over great distances, or over time, instantly. In other words, it represents a shortcut, or maybe a guiding pathway to a particular destination.

This link creates an uninterrupted path leading from our own planet to the Sun’s atmosphere,” more than 93 million miles (157 million kilometers) away,” says UI plasma physicist Jack Scudder.

The observations that led to this conclusion were carried out using the Cluster constellation – which is operated by the European Space Agency (ESA) – and the NASA Time History of Events and Macroscale Interactions during Substorms (THEMIS) mission.

The satellites indicate that the magnetic portals open and close several times per day, and that they are located around only a few tens of thousands of kilometers away from Earth. They prefer to appear at locations where the geomagnetic field meets incoming solar winds.

These portals can be either short-lived, or can last for a longer time, allowing highly energetic particles to flow right through. These particles can heat the planet’s upper atmosphere, create geomagnetic storms, and spawn very bright auroras.

NASA plans to study these magnetic portals in more detail, once it launches the Magnetospheric Multiscale Mission (MMS), in 2014. The constellation will feature four identical satellites.

All the vehicles will study magnetic reconnection, a process that occurs high above the planet, and which can provide telltale signs regarding the formation of magnetic portals. Each of the MMS spacecraft will have the ability to detect these clues, and then alert the others of the impending event.

Posted in:  World News
ATTENTION READERS
Due to the nature of independent content, VT cannot guarantee content validity.
We ask you to Read Our Content Policy so a clear comprehension of VT's independent non-censored media is understood and given its proper place in the world of news, opinion and media.