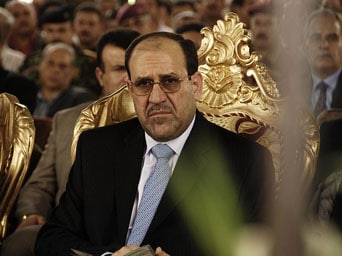 Prime Minister Nouri al-Maliki’s “harassment and persecution of anyone deemed a threat to himself or his party has dramatically reduced freedom throughout Iraq,” a noted journalist reports.

What’s more, al-Maliki is presiding over a system “rife with corruption and brutality, in which political leaders use security forces and militias to repress enemies and intimidate the general population.”

So writes former Los Angeles Times foreign correspondent Ned Parker in the March/April issue of “Foreign Affairs” magazine. His is a rather grim assessment of life in “The Iraq We Left Behind” or “Welcome to the World’s Next Failed State.”

Although the level of violence is down from the worst days of the civil war of 2006-07, Parker notes “the current pace of bombings and shootings is more than enough to leave most Iraqis on edge and deeply uncertain about their futures.”

Parker writes, “They (Iraqis) have lost any hope that the bloodshed will go away and simply live with their dread.”

The day after the last U.S. soldier left the country, Parker points out, Maliki called for the arrest of Iraq’s Sunni vice president, Tariq al-Hashimi, on charges of running death squads. The move undermined the understanding Maliki had with President Obama arrived at in Washington just days earlier “when they declared Iran a stable democracy.”

At the same time, Maliki’s son, Ahmed, in charge of his father’s personal security, has ordered the elite Baghdad Brigade “to seize houses belonging to Iraqis and foreign contractors in the Green Zone. The seizures have spread the impression that Maliki’s inner circle “is mostly interested in enriching itself.”

Those who cross Maliki may be held in the secret Camp Honor detention facility in the Green Zone where they are tortured to extract confessions, after which they are sent off to legally sanctioned prisons. Parker writes that the Red Cross found evidence of “systematic torture and gross mistreatment, including rape and electric shock to the genitals.” In addition, U.S. officials found prison security officers seeking bribes to release prisoners.

While Maliki just a few years ago was considered the best hope for bringing security and development to the war-ravaged country, Parker writes “these hopes have largely been dashed.” He points to the oil rich city of Basra, “marked by open ponds brimming with sewage, sporadic electricity, and shantytowns made from looted sheet metal and bricks.” Basra’s woes include “closed factories…miles of slums, (and) dried-out irrigation canals.”

After describing the widespread culture of graft, where “military officers and ministry officials receive kickbacks on contracts for food supplies to defense equipment,” and favorites get sweetheart contracts for building everything from a sewage line to a highway, Parker reports disenchantment is widespread. He says the local elections next year and the national elections in 2014 will test Iraqis’ leaders commitment to democracy.

“If Iraq slips into dictatorship or war, this will be the United States’ legacy in the country. But Iraq should not be written off. With outside help, it could still manage to muddle through with an elected government that is somewhat accountable and somewhat representative. Such an outcome would go a long way toward redeeming the United States’ disastrous misadventure there.”

Sherwood Ross formerly reported for the Chicago Daily News and worked as a columnist for wire services. He currently writes on politics and runs a public relations firm for worthy causes. Reach him at [email protected].