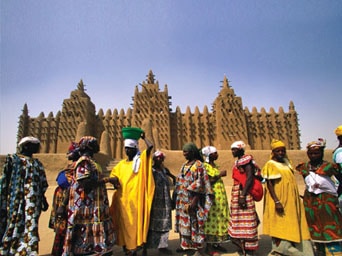 It’s too bad the destruction of Islamic landmarks in Timbuktu by the criminal thugs called “Ansar El-Islam/Supporters of Islam” did not generate or illicit the strong condemnations denunciations and material actions it deserves from the religious leaders of Al-Azhar, Mecca, Qom and Najaf. At best the condemnation was muted if not apologetic.

The biggest danger facing Islam and Muslims these days is from within, from the illiterate, ignorant, stupid idiots and thugs, who anointed themselves guardians of Islam and defenders of Sharia and the Faithful.

The Ansar Islam/Supporters of Islam of Mali, the criminal murderers of Boko Haram of Nigeria, the drug pushers of Taliban, the criminal gangs of Shabab of Somalia, the Jihadists of Iraq and the list goes on and on. These are the one who are taking Islam backward to the Age of Ignorance.

I am not so sure what these groups and many like them have contributed to Islam and Muslims except death, destruction and murder. They pray only to go out to kill and destroy.

Nor do I want to understand how can any one enters a mosque to worship and pray, only to blow up themselves killing scores of worshipers standing next to them. Iraq, Pakistan, Afghanistan, Somalia and Yemen are full of these people.

Boko Haram sees nothing wrong with blowing up churches or government buildings killing thousands, and all of this in the name of Sharia.

Their ignorance and limited educations certainly makes them unfit and unqualified even to understand Sharia it let alone go out and implement it. Allah Akbar/ God is Great is said at times of great deeds, not in death, murder and destruction.

Never could understand how can the death of a suicide bomber, a criminal and mass murderer is celebrated by family, friends even community.

There must be something wrong, very wrong with a society and community with such value system that honors killings and murder rather than life and success.

What did these groups Jihadist and Sharia supporters contributed to Muslims and Islam? I could not think of single schools for young boys and girls built by the Taliban’s and Mujahideens of Pakistan and Afghanistan or Somalia or Mali or Nigeria or Yemen, or Iraq or Indonesia.

There is not a single hospital or a clinic, or a bakery, or public toilets, or water purification plant or a water well, or shelters and housing ever built by these criminal ignorant gangs who proclaim themselves guardians of Islam and Sharia.

How can these criminal thugs dare to speak of Islam let alone claim to represent it?

One has to wonder where these ignorant misfits get the money to buy the weapons and the Toyota’s they used to terrorism citizens and communities, booby traps cars, bomb mosques, markets, schools and hospitals?

We understand the Taliban’s are the biggest drug dealers in the world and this is how they finance their war of murder and ignorance. But where do the gangs in Mali or Nigeria get their money?

For sure Anwar El-Islam of Mali, or Boko Harm of Nigeria or Shabab of Somalia or Qaeda of Yemen do not own or operate high technology companies or food and restaurants chains or manufacturing plants to fund their criminal operations. Drugs, theft, and smuggling are the only source of funding. Of course we must not forget the millions contributed by wealthy Gulf Arabs to these groups.

The recent destruction of ancient Islamic landmarks in Timbuktu and before that of statues of Buddha’s in Afghanistan should shock all Muslims and is a wake call that the Days of Ignorance are upon us.

And if they had any education it is limited educations in “madras” where the teacher is more ignorant than the students.

The engagement in terror and murder by Alqaeda, Taliban, Ansar Islam and Boko Haram and the many terrorists’ organizations within Pakistan, Afghanistan and India, Iraq, Somalia, Yemen, should not come as a surprise to Muslims.

It has been in the work for a long time. Ignorant Imams and preachers in the Madrasa have managed to destroy an entire generation or two with deformed understanding of Islam and Sharia.

There is a clear and present danger of mosques becoming a source of ignorance and intolerance with Imams and preachers anointing themselves guardians of society, protectors of its moral virtues and social values. With “Fatwa’s/Edits becoming the source of legal and moral codes not legislation by representative governments.

More dangerous is the Salafis and various “committees for the promotion of virtues and preventions of vice” (religious and social police) taking matters into their hand with instance justice arresting even murdering innocent people.

Everywhere you look around, the airwaves and satellite stations are full of “Dua’at” evangelical Muslims, and preachers like Billy Graham, Pat Robertson, Jerry Falwell and others.

These extremist Muslims are self serving, earning fortunes and practicing the same fraud and lies and hate of their counter part in the evangelical movement in the US.

Ignorance and misunderstanding of Sharia is emerging as an obstacle to modern Islam with rules of justice and equality and is standing in the way of Arab Spring countries emerging toward democracy and governments of the people, by the people and for the people.

These ignorant people are emerging as wall and obstacles preventing the emerging of Muslims states toward democracy and elected governments where the people and citizens are the source of laws and power, not these preachers, nor these ignorant illiterate idiots.