Home Veterans Double Standards?! Who, US? 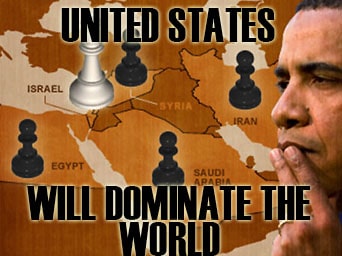 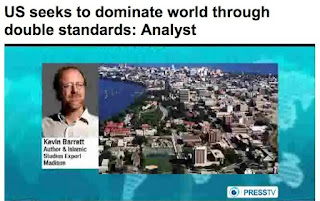 US seeks to dominate world through double standards: Analyst

Press TV has conducted an interview with Kevin Barrett, author and Islamic studies expert, Madison about US double standards in supporting a pledge to hunt down global terrorism, but actually supporting terrorist gangs and working with them to topple independent or sovereign governments. The following is an approximate transcription of the interview.

Press TV: We were discussing the role of the US and its Arab allies in fueling the unrest in Syria. Kofi Annan is in Syria right now and he has also pointed out that the elements that are backing militant gangs in Syria are hindering the hopes for peace.

Syria has time and time again called for the issue of foreign interference to be raised at the UN Security Council to no avail. Why isn’t this issue being brought into more focus as far as the UN goes?

Barrett: There is a double standard at work. It seems the different countries look at these things differently particularly the US, which is trying to dominate the world unilaterally. It is seeking to impose its double standard on the world.

If any other nation were supporting armed forces attacking the US from within the US that would be called terrorism and of course it would be unacceptable.

But when the same thing is happening in Syria and it is in fact the US that is supporting these armed forces attacking the Syrian government, that’s supposedly different. But it isn’t really.

At some point, the world needs to establish a single standard to deal with all these situations.

And in Syria the fact that there are foreign parties supporting these anti-government rebels, is going to have to be dealt with openly and it should be part of the process with Kofi Annan.

Press TV: Regarding the recent Friends of Syria meeting held a few days back, there was a call for imposing a Libya-Style scenario on Syria as far as implementing a no-fly zone, which was vehemently rejected by Russia. Secretary of State Hilary Clinton responded saying Russia will pay a price for it stance on Syria.

Where is this going to head? Do you think the US is banking on this Libya-style scenario to be replicated in Syria or are they going to try other ways to achieve their aims?

Barrett: I don’t think they will be able to impose their so-called no-fly zone on Syria, which really means shooting down planes and bombing the country. It’s an Orwellian sort of doublespeak term that doesn’t mean what it sound like it says.

And the Russians learned their lesson in Libya and Russia does have a much closer relationship with Syria than it had with Libya and I don’t think the Russians are going to be allowing the US and other countries to be attacking Syria openly. So I think that really is off the table, I can’t imagine that the US government is crazy enough to try to risk a war with Russia over Syria where really the US has no vital interests.

The real force behind the war is the Likud Zionist Party in Israel, which has an agenda to destabilize the Middle East and in particular to break Syria up into a number of different countries based on their various ethnic and religious differences.

This has been a Zionist project for decades and you can see it coming to fruition today as they’ve managed to get the US on board with it and they’re laying waste to the whole region.

Some of my other Press TV interviews: