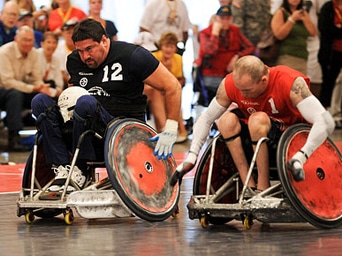 Veterans Workshop, based in both Washington, D.C., and Rhode Island, called President Obama and GOP presidential candidate Mitt Romney on the phone. The organization does not have a political message but aims to increase awareness of veterans with these disabilities — specifically those who are blind. The VA reports there are about 158,000 veterans who are blind or visually impaired living in the U.S.

“Our message to Obama and Romney is that there’s such a thing as this blind-deaf relay technology, and we think they should be proud of this service using this technology developed in the U.S.,” Ken Smith, a trainer for the charity, told the HuffPost. “And we want both candidates to remember the sacrifice these men and women have made.”

Many of these injuries are a result of improvised explosive devices (IEDs), or roadside bombs, which have caused a disproportionate number of eye and ear injuries, explains Smith, 60, a Vietnam War veteran himself.

With the aim of providing jobs specifically for blind, deaf and paralyzed veterans, the Veterans Workshop created the relay system to operate within a Google+ “group hangout” chartroom. Google Voice reads the deaf veteran’s online chat to the blind veteran, after which the blind veteran makes the phone call — anything from calling about VA benefits to ordering a pizza.

“We’re fairly smart on technology,” Smith said. “We’re not Bill Gates and we’re not Steve Jobs, but we’re always looking for ways that tech can help those wounded in combat.

David Darlington, spokesman for the Veterans Workshop said “The grant from OthersFirst, who operate “Cars Helping Veterans”  is allowing us to train additional blind veterans and to begin the process of developing the technology to train deaf veterans as skilled digital designers”

OthersFirst operates a series of car donation sites nationwide and is extramelly generous in its support of American Veterans.

To read more about how you can help others first, visit their website at http://www.othersfirst.us

The Veterans Workshop is grateful to the organization “Others First” for their generosity and help.