Home Veterans London – Colorado: A “Sea of Terrorism” Around US 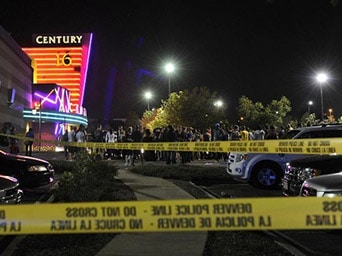 We should have a safe Games in London and as presently advised there is no reason for teams, visitors or dignitaries to follow the example of President Peres and withdraw.   I am of course aware that Shimon Peres has provided a religious pretext, but I for one am not buying.  There was a threat – a major one – but with the assistance of the Vulcan Team including Veterans Today founder Gordon Duff it was spotted and dealt with it, no thanks to Thames Valley Police, in April.

I am hearing from sources close to CIA that a follow-up bio-weapon threat, using part of the Syrian stockpile, has also been averted, thanks to good work from the Virginia Farm Boys.   Well done.   If I were to be told that the recent Terminations With Extreme Prejudice in Damascus were not entirely done locally you would not hear a thud as I fell out of my chair.  Neither general had much to complain about, apart from some minor due process issues (you will always find a lawyer willing to nit-pick).

There have been some disagreements amongst the Vulcan Team about whether there is an ongoing threat, but I understand that satellite sweeps of the Olympic sites are coming up negative, which is good news.  Careful filtering of the main site is required, as for some odd reason slightly radioactive material was used as groundfill when the site was levelled.   For nuclear security of the site we are heavily dependent upon you guys, as our capabilities are very limited and co-ordination of intelligence in London has been taken out of the hands of professional intelligence officers and placed in the hands of civil servants.  These civil servants not only lack intelligence expertise, they are no brighter than the average senior civil servant (ie could not cut it in INTELCOM) and have a distressing tendency to filter the intelligence to that which is politically acceptable.  On the DVD eg their advice to ministers is just risible nonsense.  MI5 are about where the great J Edgar was in 1948.

In the UK we have yet to absorb the lessons of 9-11, which led inter alia to the Intelligence Conference 2005 (INTELCON), the greatest gathering of spooks and intelligence specialists ever assembled (and yes, I was there, as a speaker), the follow on conferences in 2006 and the fun but informative Spy Cruises.

It is not just Whitehall which lacks intelligence expertise.  By all accounts the Denver PD boys are struggling, although they are no doubt doing their best.   I am angry about the waste of the lives of John Larimer, Jessica Ghawi, Matt McQuinn, poor little Veronica Moser and the others.  After the DVD-sponsored massacres in Cumbria (the silly new name for Cumberland) in England in 2010 and Oslo in 2011 there was no excuse for letting it happen again.  Sadly the truth was suppressed in Cumbria (the media and the public were fobbed off with nonsense about the shooter committing suicide with a gun he’d left in his car) and Norway, where the authorities chose to go down the lone gunman line, when just about everybody in INTELCOM knows there were at least two shooters.

The debate over Oslo is whether there were two or three shooters, not one or two.  The Breivik trial has been a farce, with respect to the lawyers (it isn’t the court’s fault).  Neither prosecution nor defence engaged in any serious ballistic analysis, ie the facts as presented to the court were an agreed version.  The Norwegian Labour Government dare not admit that the Quislings did not pack up shop in 1945.

My initial take is that James Holmes did not act alone.  He probably wasn’t alone on the night, although he was clearly alone in the cinema.  He has no known explosives expertise, eg, and it is improbable that he was able to rig an effective booby-trap, nor can anyone explain why, if he did rig it, he would defeat his object by telling the police about it.  I have not seen any credible source of funding for the guns and ammunition for a guy whose last job was at a McDonalds.

Sadly Denver Police and the Denver Field Office seem with respect to have prejudiced their enquiries from the outset by obsessing on the lone gunman theory.  Mass murder inquiries need to be approached with an open mind.  Most are intelligence set-ups and that means either the DVD or the North Korean RDEI, the only agencies so far to have adopted this criminal and disreputable tactic.  Since the RDEI tend to use only North Korean agents, sometimes false-flagged as South Koreans (as in the Virginia Tech shooting, eg) we can just about rule them out.  That leaves the DVD, past masters at mass-shootings.

The problem Denver PD will have is that the FBI will tend to take the lead on intelligence matters, and I hear the boys in the Denver Field Office are out of the loop on the DVD.   Administration policy to is suppress all intelligence about the DVD in American possession, not comment publicly about the agency (at all – not even a denial) and instruct federal agents to distort criminal investigations if need be, in order to keep the existence of the DVD secret.

Denver PD could get round this by bringing in outside consultants (yes, this is an advert!) but are unlikely to do that.  I’ve never yet charged a US law enforcement agency for my advice (probably should have, but it’s not my style), the Denver boys have never hauled me over for speeding on I-70 and I’ll take their call for free if they want to speak to me (NYPD, Columbus Police Department, LAPD, LA County Sheriff’s Department, AMTRAK Police Department, Chicago PD, DEA and Metro Police in DC should have my numbers, if not I am sure the good folk down at the Denver Post would help, or they could reach me via Gordon).

My aim?  No more lives wasted in mass-shootings.  Until we run one to ground the DVD will keep organising them.  We make it so easy for them.

Two things are not to blame: Colorado’s sensible gun laws and the Batman movie.   The first ritual calls for tougher gun controls have already come out of the less intellectually rigorous parts of Colorado academe, surprisingly not out of Boulder.  Thank God for the National Rifle Association, which should be able to inform the debate – and in case they don’t know about the DVD I’ll be informing them, in fact I’m sending them a courtesy copy of this article.  And yes I have their number.

The movie sounds like a credit to Warner Bros (I’m at their disposal too, if they would like to safeguard their investment).   Fortunately they have not been panicked into pulling the movie, nor should they.  The latest genre of Batman is not to my taste – I am afraid I am of the generation which expects Batman to be played by Adam West, Robin by Burt Ward and Commissioner Gordon by Neil Hamilton – but I shall be watching this one.   Don’t boycott The Dark Knight Rises –  watch it, if you want to pay your own tribute to fellow movie-goers who never got to see the end of the movie.