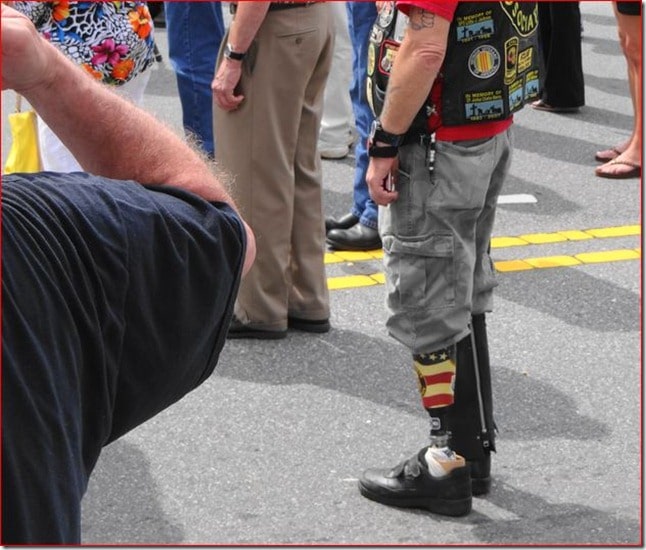 Mooresville, North Carolina…Richard’s Coffee Shop, “The most patriotic coffee shop in America”. Just around the corner from my house there’s a great place to stop in for a cup of Joe. It is a hangout of sorts for Veterans which I have written about this past year, and has become so popular it needed to pick-up roots and relocate up the street to larger quarters.

The grand re-opening turned out about half the town and what an event it turned out to be. People lined up and down the street; the ROTC in full dress provided the color guard; Veterans on motorcycles, their bikes lining the street for blocks; and curious citizens pushing through the crowd to get a peak at what is fast becoming a great tourist attraction in a community that has no shortage of NASCAR and Motorsport attractions.

Richard’s is far more that the run-of-the-mill coffee shop you would find down on Main Street in most small towns across the country. It is actually a living museum of military artifacts brought in by those who have stopped in over the years to receive their “Welcome Home” from the troops who patronize the place most days of the week. It is home to many and a refuge to those looking to find some element of closure that may be haunting them from their days on the firing line where death was but a breath away. Veterans, regardless of when and where they served, have found their Band of Brothers in this small town just a few klicks north of Charlotte.

From my first visit I was awestruck by the camaraderie, and nearly overwhelmed by the intense feeling that “I belong here”, yet I was no hero, I just did my bit in the Marine Corps and hit the highway. For years I carried guilt that what I did for my country was nothing compared to all those who sacrificed so much, but twenty minutes inside the hallowed walls of Richard’s (well before the move to new quarters), Joe the Undertaker straightened me out.

Who is Joe the Undertaker you might ask? Well, imagine doing a couple of tours in Vietnam and having the responsibility of body identification and packaging remains up to be sent home, sometime not even knowing if the right pieces were always with the right bodies. If anyone carries the scars of war, certainly Joe would be high on the list of those you’d think would have mental problems after the fact.  A sit-down with Joe was all it took to make me understand that when you sign on the dotted line to join the military it is like cashing a check, and Uncle Sam will cash that check as he sees fit. Everyone is part of the team which would not function without full participation of all. It is really that simple.

As to the museum, just about every kind of memorabilia can be found hanging on the walls or tucked away in a display cabinet. As the popularity of the museum has grown, so too has the number of museum pieces that have been collected. It became impossible to house all the gear in either of the two previous locations so finding larger quarters became the focal point of the Board of Directors. A new building with room to grow and enough space for all the memorabilia seemed like an almost impossible task given the fact that visitors to Richard’s seemed to be growing as fast as the collectibles kept piling up, but finally the location was found although not at a price anyone thought would be possible to meet.

Maybe it is true that God takes care of old Veterans as the task to acquire the new building looked to be an out-of-reach idea. Board President, Col. John Hedley (US Army retired), went after the project with all the perseverance that kept him alive in Vietnam. John kept knocking on doors, setting up fundraisers, and finally landed a bank that believed in the mission to preserve the honor of those who have given so much to serve the country. In the long run it took creative financing, and the strength of the willing to make it all happen, but it was the corporate sponsors which made the transition from run-down vacant building to a museum of excellence.

The renovation to meet code compliance was a major challenge rivaling the search for the building and it would not have been possible without a lot of community support and those few key sponsors like Bojangles Chicken which provided for the kitchen equipment and seed money to help fundraising; Point Blank Range (gun club); Austin Canvas; Subway; Big Hat Larrys; Secure the Perimeter; Applebee’s;  Masco Architectural Products; Shopping Local Biz; Richard Petty Motorsports; 150 n’ Out family Billiards; Artisans Signs and Graphics; Weststar Mortgage; Davis Spine Associates; Black Forest Garage, and many individuals who gave without hesitation.

The renovation…the muscle so to speak, was provided by Veterans ranging in age from 60-something to over 90! It provided a new purpose for some just to be part of it. As walls came down and new ones constructed, you could feel the pride that went into the job. Unlike the days all had spent in the military where complaining was always part of the daily ritual, nobody uttered a negative word…they just went about the task of finishing the mission.

Today, when you walk in Richard’s Coffee Shop for your first cup of Joe and a “welcome home veteran” for the first time, you feel the presence of history and honor just standing in the entryway to the museum. As you walk through the exhibits you will understand how Richard’s has become known as “the most patriotic coffee shop in America”.

If you are ever down Charlotte way, you owe it to yourself to stop in for your “welcome home”, and a free cup of coffee. If you are fortunate enough to come in on Saturday, you’ll hear the sweetest sounds you will ever hear from the Bluegrass jam session which has become a well-know ritual and tourist attraction unto itself. If you feel the urge, just jump right in, there’s always room for more.