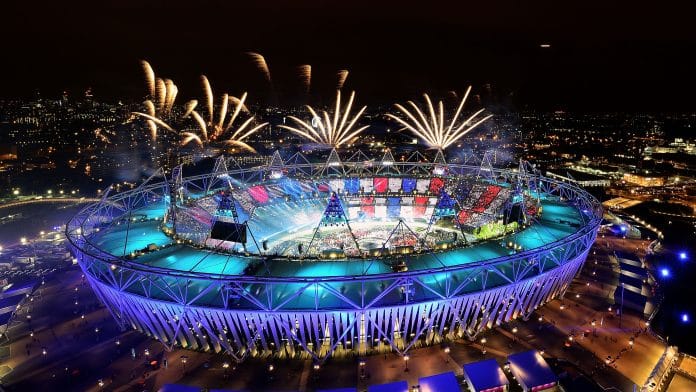 In 1948, London saved the modern-day Olympic games.  It was 3 years after World War II ended and 12 years since the Olympic games were held after suspension due to the war.  London, while in tatters after the blitzkrieg, rose to the occasion and held the “Austerity Games”; a major success that opened the door for the next 60 years of Olympic success.

Fast forward to 2012 and with a gluttonous budget of 17 billion, these London games are the exact opposite.  They mark the beginning of the end of this era’s Olympic fest

First off, a budget larger than the GDP of most of the countries who are participating is simply out of touch.  Second, the only people who can afford to attend the games in person are the 1 percenters or those who work for the corporate sponsors.  The locals who live in London have been shut out vis-a-vis ticket prices and unavailability of tickets because they were allocated to the corporate sponsors.

Nope, these are NOT the people’s games.  This has become a love fest for the 1% who run the Monetary Economic System and deliver the show to the global peasantry via the various pay-for-TV systems around the world.  It’s just another delivery device used by the elite to re-enforce the failing economic system of consumerism and wage slave-ism whereby the elite can continue its control over the billions of us who are at their mercy.

Furthermore, it’s fitting, that these games are being held in the city that wins the award for modern-day surveillance.  Yep!  Jolly Ole London has more big brother cameras and surveillance watching its people than another city on this planet.  She is the poster child for the Bilderberg future being implemented as we watch this former glorious event.

Now, that’s not the say the athletes won’t be super duper. The young people there competing have the spirit to perform with most of them getting nothing but the experience to be among their peers.

Of course, for some, they are already millionaires or will shortly become so as they play into the system and sell their souls for rock n roll and the products that they will endorse to perpetuate the global consumption system.

All of this above will eventually collapse the system because it’s ultimately corrupted by the greed of the organizers and corporate backers.

On its own, it will collapse eventually as the global peoples reject this display of greed masking itself as a sport.

But what will really kill this modern version of the Olympics is evolution itself.

The whole idea of nationalism is already dead.  It’s just that the elites have not formally announced its obituary.

I mean, every leader in the world; both corporate and government are already playing the globalist game while they sell us, the peasantry, the old bill of goods called Nationalism. Predators like U.S. presidential candidate Mitt Romney come to mind.  This jerk-off won’t release his tax returns to the very people he is asking to vote for him because he knows that it will clearly reveal that his monies are invested globally in places that do NOT have the best interests of the American people at heart.  While a globalist, this elitist psychotic predator with a penchant for gaffing, wants the nationalists to work for him whilst the globe trots controlling resources.

And it’s not just Romney, it’s all global politicians and corporate leaders. They are playing the global game while they keep us under control in the antiquated nationalist game where they can collect our taxes, wage slave us out, and farm us for their agendas.

While the peoples of the world continue to buy into the separation politics that is nationalism, it works for the elite.

And so, today, in London, for archery, China won the first gold medal of these dying Olympic games.  But really, it was not China that won.  It was the athlete that won the medal. He earned it.  Not the elites in China who are playing the global game.

And so, someday, soon, once the peoples recognize they’ve been playing an old game while leaders have been playing a completely different game, nationalism will die and so will this modern perversion of the games.

We will have a new Olympic game that celebrates the athlete directly.  No country will win anything.  There will only be us; the people.  One Love!  One People!  All of us.  The new Olympic spirit will be that all of us will pledge allegiance to every human on the planet; not to some arbitrary country drawn up by some corporate leader owners.  Nope!

So enjoy these dying games…..and the sooner we get rid of this perversion, the better.

The Olympic Hunger Games:  Brought to you by Visa, Mastercard, American Express, BP, Exxon, the Queen of England, and the Nathan Rothchilds who are playing golf around the world and laughing at us!  Good riddance!