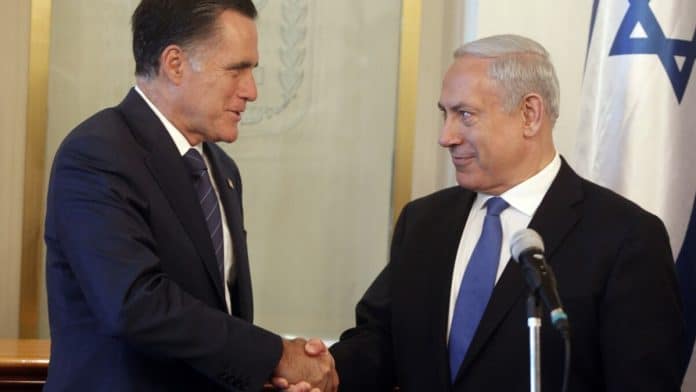 Today, U.S. Presidential Candidate Mitt Romney is in Israel working to shore up his foreign policy credentials and ties; so he says.  According to his campaign, he wanted to make his first trip overseas to demonstrate to U.S. voters at home that he cares for the ancestral interests of American citizens.

So first he went off to England to have a cup of tea with their leadership and celebrate the Olympics with his wife who had a show horse in the competition’ very noble. In fact, most Americans identify with “show” horses – it’s such a people’s endeavor (wink, wink).  Anyways, this guy happened to insult the country of England during an interview with Brian Williams by suggesting that the people were not ready.  Perfect Mitt!  I don’t know…maybe he’s vying for the George W. Bush award for idiocracy.

Something stinks about his supposed reason.

I mean, this assertion simply does NOT pass the test for validity and here’s why;

First, according to all reasonable estimates, those who practice Judaism in the U.S. number a bit over 6,000,000 people; which is just 2.1% of the overall population of the U.S.   That’s a high number too!  And the majority of those Americans who believe in Judaism are registered, Democrats.  So he’s talking to maybe a bit over 2 million people?  Heck, let’s give him all 6 million!

But here’s the big rub

African Americans number over 12% of the U.S. population, over 38 million people, yet Romney, the alleged candidate that wants his first foreign policy trip to reach out to American voters chooses Israel over Africa.   Worse, consider this huge demographic fact;

Mexican Americans top over 30,000,000 million the in the U.S.A. and are the fastest growing minority in the USA.

Currently, that’s over 8% of the population.  And worse, Mexico is the absolute largest neighbor of the USA with over 110,000,000 million people.  And behind, Canada and China, Mexico is the 3rd largest trading partner with the USA.  Israel is NOT even in the top 10.

Of course, the coup de gras is that Romney’s family is from Mexico.  His dad, George, was born there.  Heck Romney could easily become a citizen of Mexico.   Sounds like Romeny prefers Gafilte Fish to Fish Tacos!

What’s with the fascination with Israel? They only have a few million U.S. Voters and are smaller than the size of Rhode Island.  This makes no overt cents!

Consider that from Jerusalem today, Mitt Romney said he would “respect” Israel’s use of military force to stop Iran from developing a nuclear weapon, a senior aide said on Sunday as the Republican presidential candidate began his visit to Jerusalem. “If Israel has to take action on its own, in order to stop Iran from developing that capability, the governor would respect that decision,” Romney’s senior national security aide Dan Senor told reporters traveling with the candidate.  While stopping short of endorsing a preemptive military attack, the comment seemed to differ from President Barack Obama’s attempts to convince Israel to avoid any such move.

Gov. Romney’s first meeting was with Israel’s Prime Minister, Benjamin Netanyahu, who greeted him as a “personal friend and friend of Israel.”

Shaking hands underneath U.S. and Israel flags, the pair signaled that Iran would be top of the agenda in their discussions. Netanyahu said: “We have to be honest and say that all the sanctions and diplomacy so far have not set back the Iranian program by one iota. And that’s why I believe that we need a strong and credible military threat coupled with the sanctions to have a chance to change that situation.” Later, Gov. Romney and his wife Ann visited the city’s Wailing Wall.

I am no expert but it sure looks like Romney is dissing the majority of American people in favor of something else that seems not to care for the interest of the US. peoples. What say you?