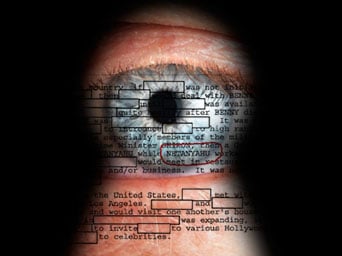 Hidden at the bottom of a report on Israeli spying against American diplomats and our CIA personnel inside Israel, breaks ins, stolen secrets, wire tapping is something much more serious.

The problem began with Syria and involves their extensive program of biological and chemical warfare weapons, one of the most dangerous in the world, weapons now threatening the entire Middle East.

We will get to that issue and the horrific information we stumbled on “in plain sight” today but first to place a “black dot” on Netanyahu, a particularly appropriate act during the visit of Mitt Romney an American candidate that, by standards most Americans find shameful at best, manages to exceed even our worst expectations.

First of all, we will simply report what the Washington Bureau of the Associated Press “mined” a spying article with.

Such articles have been loading the press over the last few days after documents were released that by the FBI under the Freedom of Information Act that literally tie Israeli Prime Minister Benjamin Netanyahu to a nuclear spy ring in the 1980s, acts that include potential crimes of espionage carried out on American soil while Netanyahu was a private citizen.

The applicable page in this SECRET document, highly redacted, which includes mention of Netanyahu tied to the theft and resale of “nuclear triggers” later blamed on a Pakistani scientist now known to be totally innocent is best to get out first: 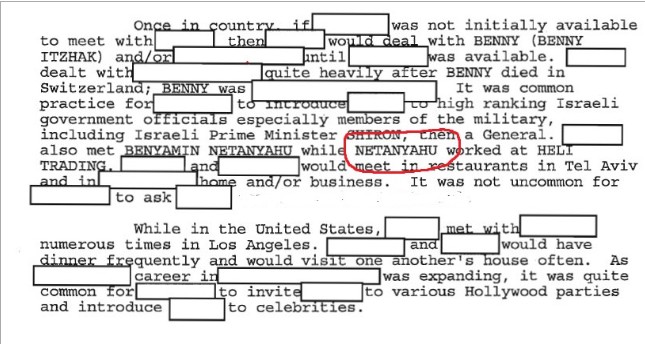 A review of the multiple page FBI file, explains the circumstances around the theft of nuclear triggers, one of the most classified and secure technologies America has, their removal from the United States and those the FBI believed involved.

Netanyahu’s name is mentioned twice.  In addition, document experts at a national intelligence agency found lines of text had been added in a manner inconsistent with the age of the document, intended to alter the meaning.

A section of alterted text is included in the exerpt below, representing document counterfeiting by the FBI.

Document experts indicate that the original had been altered to include the words “Tel Aviv” and the sentence, “It was not uncommon for…unclassified material.”

These alterations would make a US crime scene and Israeli one and, for no rational explanation whatsoever, provide exculpatory language excusing the passing of material being investigated by the FBI, with Netanyahu as the target as “unclassified.”

Though Netanyahu’s name is left for all to see, though under redacted and counterfeit circumstances, one of our readers added some details as to where this expionage happened and one of the names redacted by the FBI:

Point blank: Arnon Milchan is the head of the snake when it comes to the “Hollywood Illuminati” and a right hand man of Netanyahu. He was selling krytron triggers as well, as if you would use that for a low-level current in an oven. It’s amazing what a few turned eyes can do.

Someone should remind the FBI that, when they decide to alter investigative reports made by their teams that their agency does not do investigations of either stolen military technology or engage in such activities outside the United States.

The FBI has one employee, a legal attache.  I am not so sure they were following Netanyahu around Tel Aviv’s night life with a hidden camera.

Please excuse the “not spy” language but in today’s terms such an attempt is referred to as a “fail.”

Were the name a different one, such a document would likely reside along with photographs, informant statements and tape recordings.  They would then be turned over to a US Attorney for processing which generally leads to an arrest and conviction.

Netanyahu’s “Wikipedia” fails to mention his work with the companies mentioned during this time.  In fact, the FBI references seem to reflect an entirely different history than is publicly acknowledged.

There is no Wikipedia mention of Netanyahu being an espionage suspect.

Now to the meat of our surprise gift from the Associated Press.  Here is their paragraph or so:

“Some CIA officials still bristle over the disappearance of a Syrian scientist who during the Bush administration was the CIA’s only spy inside Syria’s military program to develop chemical and biological weapons. The scientist was providing the agency with extraordinary information about pathogens used in the program, former U.S. officials said about the previously unknown intelligence operation.

At the time, there was pressure to share information about weapons of mass destruction, and the CIA provided its intelligence to Israel. A former official with direct knowledge of the case said details about Syria’s program were published in the media.

Although the CIA never formally concluded that Israel was responsible, CIA officials complained to Israel about their belief that Israelis were leaking the information to pressure Syria to abandon the program. The Syrians pieced together who had access to the sensitive information and eventually identified the scientist as a traitor.

Before he disappeared and was presumed killed, the scientist told his CIA handler that Syrian Military Intelligence was focusing on him.”

I think their snappy prose speaks for itself.  The CIA had a top level asset in Syria, shared information with Israel and they passed it on to Syrian intelligence and the CIA asset “disappeared.”

In fact, according to the LA Times, the CIA has no assets in Syria.  As soon as we recruit one, we tell Israel and they soon disappear.

With no human intelligence assets whatsoever, America is subject to biological or chemical attack or worse and the threats have been made.

Why would the Mossad pass information to Syria?  Our own high level informants in the region tell us that Assad reached a secret accord with Israel in 2000.  Israel agreed to stage phony attacks, in 2003 and again in the midst of official peace discussions between the two in 2007.

Back to the AP.

WASHINGTON (AP) — The CIA station chief opened the locked box containing the sensitive equipment he used from his home in Tel Aviv, Israel, to communicate with CIA headquarters in Virginia, only to find that someone had tampered with it. He sent word to his superiors about the break-in.

The incident, described by three former senior U.S. intelligence officials, might have been dismissed as just another cloak-and-dagger incident in the world of international espionage, except that the same thing had happened to the previous station chief in Israel.

It was a not-so-subtle reminder that, even in a country friendly to the United States, the CIA was itself being watched.

In a separate episode, according to another two former U.S. officials, a CIA officer in Israel came home to find the food in the refrigerator had been rearranged. In all the cases, the U.S. government believes Israel’s security services were responsible. 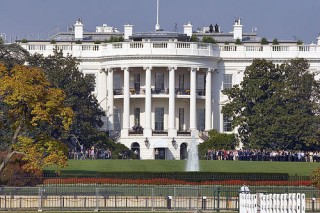 White House sources tell me that 75% of our counter-intelligence budget is spent watching “our best friend” instead of China or “Al Qaeda.”

Only about 2% of Israeli spies identified are ever prosecuted though the worst case, Jonathan Pollard, led to the deaths of 1,100 CIA agents and assets, none of whom have received their “star” on the infamous wall at CIA headquarters in Langley.

Nobody wants to explain a memorial that goes from floor to ceiling and around the corner.

It would be bad for morale.