Home Veterans Ignorance Is No Excuse Any Longer… Part One. 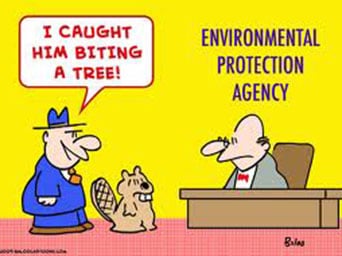 “It is impossible for someone to not recognize a problem as big as life when it hits you right in the old snot-locker!” I was once told that by my drill instructor in boot camp (among other not so quotable rules which extend well beyond life in the military). In case you haven’t looked around lately, this rule could apply to just about everything that is going wrong in today’s secular society.

I have been called an alarmist by some folks who read my columns, but name-calling is a defense many will resort to in order to support their point of view, when they feel the basis of their argument crumbling around them like a house of cards. We see that in politics and everyday life. Rather than analyze one’s self and a given position, it is easier to just dismiss another’s point of view and become more polarized from the opposing argument.

Such is where the nation finds itself three months before the most critical election in the history of the United States. Is everything that has allowed the US to develop the most powerful economy, the greatest freedom, a society that allows unprecedented reward for investment and achievement, and where even for those who immigrate here, to excel beyond their wildest imagination, all wrong? Have we allowed ourselves to be molded into a nation of non-thinking, non-analytic, morons that can be molded into the sheep-like followers described in George Orwell’s best-selling novel, “1984”?

My goal today was not to be overtly political but to ask a few simple questions, pose a couple of interesting scenarios, and see how readers will react, and while it would be nice to wrap up the nation’s problems in a single article, I can see this being one which take a few columns to complete.

Let’s start by tackling the supposition of the extreme environmentalists whose policies, if enacted, would totally destroy most of the things that, for two hundred and fifty years, has allowed the “American experiment” to lead the world out of attempts to establish totalitarian governments, set the stage for the industrial revolution, and has brought prosperity and freedom to tens of millions of people around the world. In short, to kill the economic engine that ushered in the 21st century. However you feel about America, these fact are true and paid for by the blood of our youth.

We are told, and reinforced by the political interests of those inside the beltway, that “the free-market economy is just unfair, that we are destroying the world with old environmental policies and must change our ways or global warming and other catastrophes will surely wipe out the entire world. We are told coal and petroleum products are bad, and that green energy must be implemented beyond all economic costs. President Obama and those inside the beltway have gone to great lengths to fund green companies with tax payer money but unfortunately, not one of these companies has succeeded. Furthermore, as of now, there is no technology or renewable energy on the planet that can lift and keep an airplane in the air or fuel a cargo ship across vast oceans. 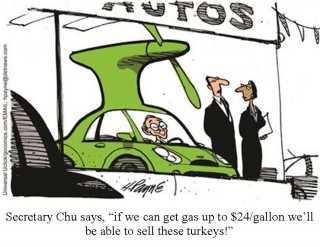 The President and  Energy Secretary, Steven Chu who infamously said, “We have to figure out how to boost the price of gasoline to the levels in Europe”, are embarrassingly dead wrong on their views of how and why we have become a stagnated economy with unprecedented employment failure at every turn. Their views are a graphic illustration of how the Green Movement is effecting the values of what most Americans hold dear.

Everyone knows about Solyndra but few have any idea of all the other “Green Energy Boondoggles” perpetuated by crony-capitalism grants and loans ALL AT THE EXPENSE OF THE US TAXPAYER. Below is a list of energy companies, not one of which has succeeded, that rest squarely on the door step of the Capitol

How have we gone so wrong? Venture capital in the form of investments from companies like Bain Capital, are done with private money. It has worked in the US for hundreds of years. 50% of those investments will generally end in failure, because most are made with companies already on the road to closure. Today the Class Envy Gang sees this as being “greedy”, but would anyone in their right mind, make such investments without the possibility of making  a sizeable return on their investment? Only the government could be that foolish.

So, let’s see where this crazy mind-set starts. For our example, let’s start at the local grocery store when a woman brings her own grocery bags because plastic bags are not “good for the environment”. The woman apologizes and explains, “We didn’t have this green thing back in when I was younger.” The young clerk, fresh out of a school system that has indoctrinated him into a believing everything is true about the environmental movement (easily put asunder by fact-based arguments), responds, “That’s our problem today. Your generation did not care enough to save our environment for future generations.”

The woman was right, the store clerk wrong — our generation didn’t have this GREEN AGENDA in its day as we already had the right idea without making fools of ourselves.

We returned milk bottles, soda and beer bottles to the store, and received the deposit money as a way to supplement the allowances we earned by doing household chores. The store sent them back to the plant to be washed, sterilized and refilled, so it could use the same bottles over and over. They were recycled, but what made the program work was the financial incentive of those blamed today for all the world’s ills.

Additionally, back when we were young, stores bagged our groceries in brown paper bags.  We reused those bags for numerous things, most memorable besides household garbage bags, they were used as book covers for our schoolbooks. This was to ensure that the books, provided for our use by the school, were not defaced by our scribbling. We were even able to personalize our books with some of the best artwork of our time by using the brown-bag covers as our artistic canvas.

In fact, building on this example of the grocery store, we didn’t have elevators and escalators in most the building and stores when we grew up. We walked up the stairs to get to the second and third floors, and were in far better shape than the lard-butts of today’s generation who cannot tear themselves off the couch and go anywhere or do anything that requires walking or riding a bicycle. They demand to be taken to their destination by cars which ironically require the use of petroleum, and they almost never get to the upper floors of today’s mega-malls without elevators and escalators. I believe this shoots holes right through the environmentalist’s blaming everything  on the generations that came before.

By the way, for those following my line of reasoning, with the trillions of dollars spent so far on all the proven and unproven “green energy” alternatives to petroleum and coal-based energy options, hydropower accounted for 8.94 percent of U.S. electrical generation, followed by wind at 3.24 percent, biomass at 1.33 percent, geothermal at 0.41 percent, and solar at 0.04 percent. Abysmal by any stretch of the imagination.

We simply cannot run our economy; power our airplanes, cars, trucks, trains, factories, and lifestyles, with fairytale ideas of a “green energy panacea”. And for those needing further prodding to get with the program, the US alone, has 400 years of petroleum not counting an additional couple hundred years of oil shale.

But the argument doesn’t stop here. Back when we grew up we used cotton diapers and washed them because we didn’t have the throwaway, disposable plastic kind. We dried them along with the rest of the clothes on a line, not in an energy-gobbling machine burning up 220 volts. We were way ahead of the curve in using “alternative energy” back then when wind and solar power dried our clothes. We also got a lot more wear and tear out of our clothes as kids got hand-me-downs from their brothers or sisters, not a new wardrobe every few months with designer jeans (already with holes in them, by the way) and an assortment of tennis shoes, shirts, blouses and other paraphernalia often made from petroleum-based fabrics.

In part 2 of this article we’ll finish the green energy debate, by identifying the many hoaxes that are being perpetrated on the public and talk about the other issues making the November election so important.