Home Veterans And The Winner Is Israel 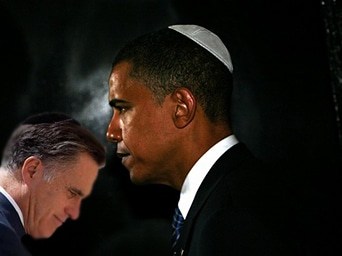 This year US presidential election is perhaps the most expensive in history with the least issues concerning America and Americans with the American/Israeli Jewish businessman Sheldon Edelson calling the shots and shaping the election.

2% of the US population, 60% of political donations and with “Israel First” as the only agenda, no wonder both candidates are tripping over themselves and each other in winning the votes and donations of the American Jewish community. In this US presidential election, America and Americans is the loser and Israel is the winner and its Fifth Column reign supreme.

Mitt Romney, not so smart and savvy international statesman (even if spent few years in Paris rather than choosing to serve his country) went to Israel to pay homage and present his political allegiance to Israel and its Fifth Column in the US, encourage Israel and commit the US to another war, this time against Iran.

After all Romney made his money not through products and services to consumers but by raiding ongoing business, looting the treasury and shareholders of such corporations, thanks to a willing Wall Street that provides the financing for such corporate raiders. Romney continues to think of himself as savvy and smart businessman, when he contributed nothing to the national good.

Keep in mind Barrack Obama did the same thing as US presidential candidate when he traveled to Israeli visiting the Wailing Wall and inserting his wish to Yahweh, visiting Vad Yashem and Siedrot the Israeli border town the focus of last presidential election.

With the way things going on, the US is the last country to teach the world especially the Middle East about free elections and democracy. American democracy is all about money, pressure and special interests groups.

In the US every thing is all about money, money is the driving force behind political and hot contested social issues, with lobbies and political pressure groups as AIPAC, Tea Party, NRA, and anti-abortion forming and shaping the debate and making decision in a country facing major and catastrophic failing economy, corrupt financial institutions, corrupt Congress and failing infrastructures with tens of millions below poverty lines.

As a former financial contributor to “Democratic” causes in the past I am bombarded every day with at least 5 to 7 email messages from “Democratic” operatives and personalities from Barrack Obama, Joe Biden, Albert Gore, Dana Brazil, Nancy Pelosi all seeking and asking for donation to meet a much better financed Republican candidate. Romney raised more than $100 millions this past month. This year I decided I would not support nor donate any money to Democratic candidates.

It seems Democratic candidates are simply throwing the towels and call it quit. It seems the label “ Liberal” is the cause of political death in Washington and in Main Street. No one within the Democratic Party has what it takes to defend “liberal causes” taking on the Tea Party and AIPAC and the NRA heads on and taking charge of the political debate.

Over the last decades since the late Ronald Reagan decided to ally himself and the Republican Party with the Religious Right there has been a political coup that is taking place in America. Thanks to the US Supreme Court which deemed “corporation” citizens with First Amendment rights with the right to unlimited financial contributions to political causes and candidates.

The death of the American democracy and the death of the two party system and political pluralism is upon us and if we do nothing then America as we knew it will disappear forever. Don’t be surprised if America becomes a One Party state just like the former Soviet Union with a god.

No candidates is giving issues facing the nation real concern, with consistent high unemployment, lack of new industries with no new additional jobs, with infrastructure that is failing and falling apart. No one is talking about corporations cheating citizens and governments out of tens of billions in overpriced and over rated drugs.

No one is talking about bank executives responsible for the loss of hundreds of billions of shareholders in sub-prime lending saved by tax dollars intended to save taxpayers instead saving executives who should have been fired and in jail. No one is talking about corporate and Wall Street corruption, insider trading, conspiracy to cheat government out of tax dollars, and unsupervised trading causing losses in tens of billions.

Of course issues of jobs, quality of life, poverty, quality and affordable education, housing, transportation, community, urban and rural services are not an issue in US elections. The issues has every thing to do with “moral and value” issues dictated by well funded and well armed militia of Tea Party, using money to drive votes. Don’t be surprised if such groups resort to guns and bombing to take over America, shaping America in its own vision.

America should expect a “Christian Jihadists’ funded by rich and powerful right wing personalities who with their money shaping America future for years to come. The Tea Party and AIPAC and their allies within the Evangelical Christian and Jewish groups don’t be surprise if its ambitions goes from votes and control over Congress, to a military and political coupe in the US since Defense and Security establishments are already driven by Evangelical “Jihadists” ideology.