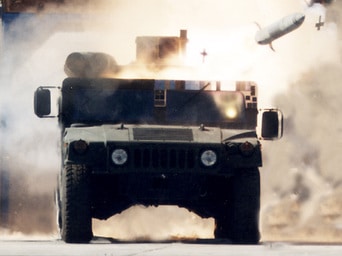 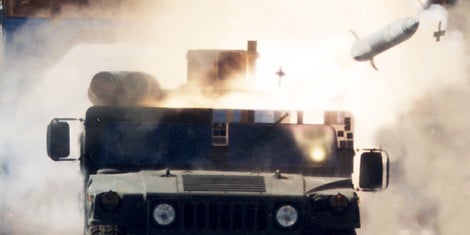 How Idiots Sell The Wrong Conspiracies

Late in Vietnam, the US developed the TOW missile.  This thing is easy to carry, half a million of them are around, my mother had one in her garage, they cost nothing and nothing can get away from them.

Yet, they are outdated by decades and no one has seen one in Syria though you can buy them on the streets of Pakistan easier than tea.

This is old tech, like your granny would use, and you see it taking out what would be a current Syrian main battle tank, the Russian T-72, which it turns into shreds.

Defending against this is nearly impossible but not one has been found though thousands are loose in the Middle East, with every country, including Iran.  Turkey has things decades beyond as does Hezbollah.

Here is a slightly newer, 24 year old “fire and forget” Javelin missile.  I really enjoy these.  They can take down attack helicopters by the droves and do it with NO risk to the operator.

The CIA would be giving them out like candy but nothing like this has been seen either.

Here is the Russian version that Hezbollah used on the poor Israelis, the Koronet.  You will have to excuse this one.  This the Russian sales video.

The great part is the music, the theme from the movie “Exodus” being played while demonstrating a weapon that knocked out more Israeli helicopters and tanks than anything else.

The Russians, a delightful people, culturally clueless, have no idea what  a social smackdown this is:

This last one is the Starstreak by Thales Corporation.  It is a “fire and forget” system with onboard laser targeting which shoots down helicopters, as you will see, blows up tanks and can take care of nasty fighter planes.

I think they make this in Northern Ireland behind the Jameson distillery.

The CIA used to give out Stinger missiles but the man who ran that program, Osama bin Laden, died of kidney disease in 2001.

He returned his last 116 Stinger missiles to the CIA in Peshawar over a cup of tea and a small suitcase of cash. Why is this video only 12 seconds?

Now, I am not calling every activist or reporter or “led around by the nose” peacenik a moron but the weapons we are seeing in Syria all seem to be from the “heavy weapons locker” of local police stations.

The other thing I am noticing is that photos being represented as current, date to the 1973 war and depict Soviet T55 tanks that were destroyed by Israel (or American fighter planes off carriers in the Mediterranean more likely.)

The point is simple.  Shoulder held weapons, some wire guided, some as simple as RPG 7’s and some as complicated as things shown above would have destroyed the entire Syrian army in a few hours.

If I can point toward a tank or helicopter 5 miles away, not even “lock on” and have the missile acquire the target, track it, defeat all countermeasures and show a 100% capability of destruction with no risk to me, why not use it?

And if I have the richest nations in the world and the biggest arms dealers handing out weapons like they were nothing, then why are we seeing tanks and not burning hulks, helicopter parts and the Syrian army burned to cinders?

If someone is handing out weapons meant to defeat Syrian army units, something I have no small expertise in explaining or doing, there is no evidence of this.

Sixty countries build these things, Japan, Ireland, I even think there is a missile from Canada that only destroys igloos.

Here are some assumptions:

Is Turkey Israel’s enemy?  NO.

Is Syria Israel’s enemy?  NO

What does this tell you? The answer is simple. Everyone is lying.

This is a “detuned”version of the system Syria is using.  Their system works past 185 kilometers and is effective against Cruise type, ICBMs and all aircraft.

Don’t expect to see someone bombing Syria really soon.  Now you know why Syria and Israel have secret meetings all the time.