Home Veterans Egypt’s Border Attack: It Couldn’t Get Any Better for Israel 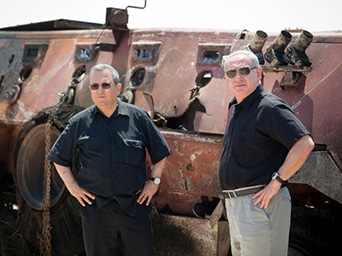 “This terrorist operation benefits only Israel”

CAIRO – Every time I step into an elevator, I keep my fingers crossed till I reach my floor safely. I am not claustrophobic. I am just worried that a sudden power cut, which are frequent nowadays in Egypt, will leave me trapped inside a metal box for endless hours.

And in a way, I believe that this is what a lot of Egyptians subconsciously feel like these days; trapped in a big dark box.

Following the most polarizing presidential elections, and enduring through a lingering cycle of, recurrent sectarian strife, armed thuggery amidst an almost absence of proper policing … Egyptians broke up their Ramadan daily fast, last Sunday, to the horrible news of a terrorist attack on a border guard unit at the Israeli/Egyptian borders south of Rafah.

On August 5th evening at 7pm, a terrorist group of 35 people attacked an Egyptian border guard unit south of Rafah (the crossing point with Gaza), killing 16 soldiers and injuring 7; three of them in a critical condition.

“The Israelis are in a way quite happy that the Egyptians have learnt their lesson, that they have to listen to us, and have had to pay the price”  Akiva Eldar, the chief political correspondent for the Israeli daily Haaretz, told Al Jazeera when asked on his thoughts on the recent deadly attack on the Egyptian guard station.

Watch the video of the wounded and slain Egyptian soldiers as they were taken to Rafah Hospital. Warning, the video contains some graphic scenes.

The terrorist group then took over an army Armed Personnel Carrier and used it to storm the Egypt-Israel border where Israeli forces destroyed it.”

But that’s not all, Coinciding with the attack, elements from the Gaza Strip carried out a mortar shell attack on the Karam Abu-Salem border crossing – which is shared by Israel, Egypt and the Gaza Strip.

An anonymous Egyptian security official was quoted by Egypt’s state-run news agency, MENA, as saying that Jihadist elements that infiltrated Egypt from the Gaza Strip through tunnels are behind the attacks, along with other Islamists situated in the areas of Al-Halal Mountain and Al-Mahdia in eastern Sinai. However Hamas, for its part, denied its involvement in the attacks.

Now, there is a lot to this terrorist raid than just the simple “hit and run” followed by the routine combing of the Israeli/Egyptian border and hunting down the assailants.

First of all, this terrorist attack comes, for those political analysts observing the Sinai security status, as no surprise at all.

Since the Jan 25 2011 revolution and due to the chaos and the security vacuum that ensued, the Sinai Peninsula-especially the northern part- has turned into the biggest black market for smuggled arms, pouring from Libya and Israel, and a haven for groups of jihadist militants, the kind of Islamist militants the USA and Israel just love to refer to as al-Qaeda.

This attack which targeted a 23-soldier-gurad unit and took only a few minutes to control the outpost, kill and wound all 23 guards, including highly trained officers, seize the weaponry and two armed vehicles and then, according to plan, storm into the Israeli side of the border that synchronized with heavy shelling from Gaza tells us a lot.

The precision of the attack and the fact that there was no one of the assailants captured, or gunned down or even injured by the Egyptian forces; indicate that this was a job pulled by professionals.

The attack also and straightforwardly tells us that the protection and security, Egyptian military says it provides along the Israeli borders, as well as over the whole of the Sinai Peninsula is nothing but a big joke.

A man in a military uniform won’t just do the job anymore; you don’t send helpless young men, with the minimum training and gear and expect them to protect the Egyptian borders with a hot spot state like Israel.

This terrorist operation was not the first in Sinai, two weeks earlier two army soldiers were gunned down by a couple of veiled terrorists riding a motorcycle.

The pipeline that supply Israel and Jordan with Egypt’s natural gas has been bombed 15 times after the ousting of Mubarak. And in July 2011, a group of jihadists stormed the city of al-Arish (biggest city in northern Sinai) and bombarded the police station in the city with grenades and semi-automatic rifles.

Anyway, two days after the border attack, It seems that Israel Okayed the deployment of a few battalions from Egypt’s second army and air forces units into the deeper/and closer-to-Israel territories of the Sinai Peninsula, designated as area B & C, which according to the 1979 Camp David accords only allowed the stationing of some units of police forces and lately border guard units with light arms.

According to eye witnesses the Egyptian military is waging one of its biggest operations in Sinai since the October war with Israel 1973. Having combed most of the tribal areas in northern Sinai, the military has so far gunned down 20 Salafi Jihadists who engaged in violence acts against military checkpoints.

Throughout the long 30 years of his reign, deposed President Mubarak, through his close collaboration/collusion with Israel, saw to it that Sinai was utterly neglected and excluded from any developmental plans. And I’m afraid if the current Muslim Brotherhood (MB) government kept up this policy and continued to view Sinai as merely a buffer zone between Egypt and Israel, then it won’t be long before Egypt will lose the peninsula to Israel once again.

What are the chances for two armed vehicles haphazardly storming the Israeli borders of surviving the attack, let alone achieve anything. Were the assailants not aware that they would be spotted on the Israelis’ radar the moment they crossed the line and stepped into the Israeli side of the borders? … Or were they assured otherwise?

Also, the way the Israeli forces had destroyed /scorched the armed vehicles eliminating any hope for the Egyptian side to identify or find a clue to help track down the suspects, added to more doubts about the Israeli involvement.

This terrorist attack achieves specific and preplanned objectives for Israel. The deadly attack comes after months of Israeli propaganda/noise about the lag security in Sinai and the possible anti-Israel terrorist operations, al-Qaeda affiliated groups would launch from the peninsula in coordination with Islamists groups from Hamas. And in fact, that’s pretty much the scenario this Rafah attack has accurately followed.

In this atmosphere of Middle Eastern unrest, and in the wake of the Egyptian uprising and the ousting of Mubarak, the used to be Zionists’ closest friend in the region, Israel is working on a long-term plan that would enable Tel-Aviv to grab a piece of Sinai (out of security concerns), put a wedge between the newly elected MB government and Hamas and to provoke Egypt into closing down the tunnels and the Rafah crossing.

In other words, reinstate the siege on Gaza.