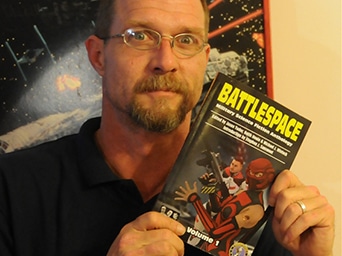 While it is a demanding, high-visibility profession, most PAOs could not imagine serving any other way. But for one civilian public affairs officer at U.S. Army Garrison Benelux, keeping service members and their families informed in Belgium and the Netherlands is not enough. He reaches for the stars.

Keith Houin is a “purple” PAO: a retired Air Force noncommissioned officer now working as a U.S. Army civilian. In his spare time, he also is one of the hosts of “The Science Fiction Show,” a weekly podcast about everything science fiction that has been downloaded more than 10,000 times since May 2011, according to Houin. The show is an outlet for Houin and his fellow hosts Jason Tudor and Michael Wistock, to share their passion for science fiction in film, television, books and other things. It also has become a way for Houin to share his love of science fiction, public relations, and charity.

Keith and his co-hosts, all Air Force veterans, have released a compilation of sci-fi stories in a book called “Battlespace” to raise money for the Warrior Cry Music Project charity.

“Choosing the right charity was a must,” Houin said. “We wanted to donate the money from the book to the right cause, and helping wounded veterans was first on our mind. The Warrior Cry Music Project was high on our list, and we’re excited to be able to do something with these folks.”

The Warrior Cry Music Project helps wounded warriors in the Washington, D.C., area by donating musical instruments and lessons in a form of music therapy.

Houin said 100 percent of the profits from the book, which can be ordered online as a paperback or e-book, will be donated to Warrior Cry. The first donation is scheduled to be made tomorrow, according to podcast’s Facebook fan page.

“This has been a lot of fun to create and a lot of fun to read,” said Wistock, one of Houin’s co-hosts. “I hope the people that pick up this book will enjoy it as much as we have.”

“Jason Tudor was the real workhorse behind putting all the material together, and without his talent this project may have never gotten completed,” Houin added. Tudor is a Defense Department public affairs officer at the Marshall Center in Garmisch-Partenkirchen, Germany.