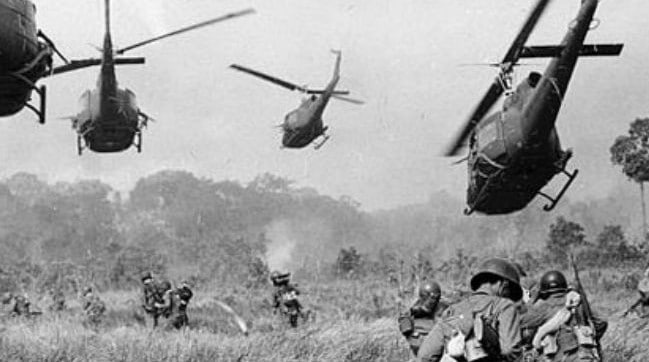 ————
There are two kinds of Vietnam vets now, dying and dead. A decade or so ago, there were two other kinds, those who really remembered the lessons and those who sold their souls for “thanks” and a platform for bitterness and ignorance. A war, a bad war, a wrong war was supposed to be a life lesson for us, teach us never to do it again.

Now we do little else. We look away, we have our hobbies.

I’m a biker, a motorcyclist. For those who ride, who can ride legally, no helmet, full out, the way we greet other bikers is with the left hand, two fingers extended downward.

Being a biker, being a vet meant you were “anti-war.”

There have been so many.

We were going to change the world when we came back, build a free society, overturn Wall Street, Washington and the hypocrisy of the VFW and Legion types who hated our guts. We learned politics, we learned history and we prided ourselves in the world we thought we were part of, rock and roll, equality, social upheaval, building an America that people now dream of, an America well beyond Ron Paul’s wildest hopes.

Sometimes all I think is left of us are the bikers, the hardcore meth snorting bikers. I used to hit the “old guy” concert circuit, buying tickets to anything I could find from the 60s and 70s, then into the 80s, and even they died off. Life was getting back times lost through nostalgia, musical groups long forgotten, now old people on stage playing music that meant so much to us then.

For many of us it still brings back the times, the hopes, the music may be all we have left of an America we lost long ago.

When at a concert, I would look into the crowd for the young faces, long hair beards, the strong voices, the beliefs, the feeling we could do anything and saw only old people, maybe a reflection of myself.

I still have crazy friends, people who have all the energy, all the belief and anger. None, however, have hope. All we have is each other, a small club. Over the past few days I have been planning a trip to Africa, some sport fishing, some work (secret counter-terrorism stuff) and a fair amount of “feet up” and “single malt whisky” time. We’ve got a plane, some bikes, a helicopter and some boats and hope to make enough working to come out even and still not be killed.

I will be going back to Africa, a continent torn apart, hoping to be part of a solution instead of part of a problem. If only more Americans realized how much we have allowed ourselves to infect the world with fear and hate. We talk about “extremists” but fail to realize that “they” is “us.”

The group, my friends, all combat vets, will be in from Eastern Europe, Russia, South Africa and America. What we are to me is a pack of Vietnam vets, or I will pretend we are, with the nasty exception that time and such has left us with rank we had never imagined, prestige to others that we, ourselves, laugh at.

Long ago we were poor soldiers. We are now colonels, ambassadors, presidents of corporations, empty words, empty titles, meaningless to each other. We take pride in how little they mean to each other.

To all of us, I don’t even know how many at Veterans Today and elsewhere, in our defense companies, the “old guys,” a group I now belong to are still, at heart, kids, 8 years old, or 25 years old though to others we look like something else. I was called “sir” by someone in a store today.

We have a great crew in Pakistan, Raja is a hoot, his cousin the Brigadier is fun as is Hamid Gul, oh, Major General Gul or Admiral Sirohey and General Beg, all 4 stars but like kids. If we were younger, or had the freedom, I would run us all up to K2 but none of us would get far unless, of course, we brought Jeff Gates, who can run up mountains.

These are great friends in Pakistan, and so few Americans have the privilege of knowing them.

We have a gang here, Jim Dean, Mike Chester, John Stokes, Kevin Barrett, Mike Harris and a list of names I am not allowed to use. These are writers, radio hosts, but most are just friends who discuss ideas and politics and look for hope.

We all have homes and grandchildren and our guns. Americans own lots of guns, which we really don’t ever use, our motorcycles; I still have a fast car that sits in my garage. Jimmie, “Colonel Jimmie,” has a stunt plane.

Gene has an off road Tahoe he drives around Russia in, giant tires, and supercharger. Gene is “Colonel Gene.”

I look for my Vietnam friends. Ralph Eckard, from Veterans Today, a double amputee from Vietnam, died barely 60 years old, I think while on the phone with me. He was under a car doing repairs when his heart failed. He was Marine Force Recon and walked 10,000 miles at my side. Ed Harris hasn’t called in years nor have others. Long ago and a million miles away we were a family.

One of my friends, former neighbor until his home was foreclosed on, and this was a “big money” house, just hit 65, former Navy Corpsman, can do and fix anything, and is now totally broke.

One friend, MBA, former project manager on major missiles systems lives in a travel trailer. Other friends live on next to nothing.

I never imagined so many people, graduate degrees, years with major companies, would have so little.

So much time is spent on Skype (recorded by the NSA) or telephone. Now with friends around the world, I think sometimes about how it should have been.

So many of us are gone, Vietnam killed so many Marines, we don’t even bother that much, dead or dying, except me, maybe except me. Other friends are 3 cancers or four, not just a few of us but many, lives after Vietnam riddled with cancer from the defoliant Agent Orange.

What we all want is for time to move backwards, for the world we were going to leave for our children, now our grandchildren, to be real, not just the lie we live now with our pretend elections, our wars even stupider than Vietnam….

Then there are dark days. Get out the tape and pain pills and maybe we all have another useless war in us, one that might kill us this time, us instead of our friends.

Psychiatrists call that “survivors guilt.” To me is the rush. Then decades of “less dumb” kick in and the idea of shooting people who are trying to keep their countries free of people like me should remind me to either stay home or come as a tourist.

Like so many of us, I was bred on war movies, an ingrained delusion that war had a purpose.

God, we were stupid.

I miss the music; I find the “oldies” stations a poor imitation of our music, an insult to our time, all “bubblegum” and too little rock and roll.

The phases, kids growing up, our lives being interpreted through our favorite television shows, and so many of us at an age when security is to be expected, looking for money for the electric bill.

So many that were going to retire with pensions and social security and savings and kids through college with tiny loans have a different life.

Kid’s tuition wasn’t $1500 a year but $25000 a year or more. Then they had no jobs or waited long to get them. Many of us who knew better watched our kids go off to war and didn’t have the money to stop them. You know what I am saying.

One of our writers is dealing with one seriously injured child and another moderately injured one. It will be his life.

Some of us have lost kids. Nobody deserves even having that described. “Horror” is a hollow word.

For myself, I don’t want to live through another election. It wouldn’t take much convincing to get me to man the barricades.

Romney and Ryan, I feel sick when I think of them. They are a “choice?”

Then I find people who like them and I feel even sicker. The worst part is, I am doing well, positioned myself well, have the unique privilege of being able to spend if I wanted, travel if I wished and never have to worry about the electric bill.

It isn’t helping because I can’t watch so many others, the numbers, were anyone to tell the truth, are staggering.

Morons call it “liberal guilt.” What it is to me is failure. We failed to build a world for the American people, to keep jobs here, to teach our children honesty and ethics. Those banksters and politicians are now a younger generation, we saw them coming and didn’t put a pillow over their faces while there was still time as I say metaphorically.

Each one of us can have something, a quiet moment, a place to sit and read, and the lucky few with lights and clean water, a place to sleep that is safe.

For millions that place is prison. If Americans only knew who makes up the 15 million in prison, the 20 million homeless, the 50 million in poverty and the 150 million one paycheck away, we would be ashamed.

When we let trillions of dollars go away, we didn’t think it was going to do something?