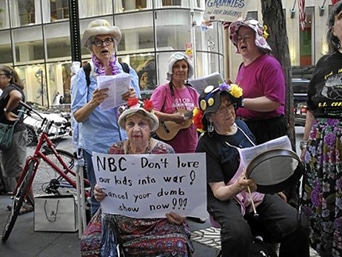 In a remarkable display of unity, a number of New York peace groups joined together in just a few days to plan and carry out a protest at NBC headquarters in Manhattan regarding the debut of the new reality show, “Stars Earn Stripes.” The program is an abomination that touts war as a game, as a sort of sports competition, an entertainment where minor on-their-way-down celebrities along with military personnel compete with each other in carrying out simulated missions, using real ammunition in demonstrations of war maneuvers — long-range machine guns blowing up mock human targets, for instance.This demonstration of the deadly capacity of modern monster weapons is hosted by none other than retired Gen. Wesley Clark, an anti-war candidate for President of the U.S. in 2004. One wonders how a person proclaiming to deplore war could get involved in such a display of seemingly almost psychotic militarism. Among his so-called celebrity participants are Sara’s husband, Todd Palin, celebrated for … exactly what?

Among the 50-60 participants in the action were MFSO (Military Families Speak Out) mothers with sons deployed in Afghanistan; Veterans for Peace; Gray Panthers; Brooklyn for Peace; U.S. Labor Against the War (USLAW); OWS Anti-War Committee; World Can’t Wait; PANYS (Peace Action New York State); and peace grandmothers groups including the Granny Peace Brigade, Grandmothers Against the War, and the Raging Grannies, who sang their spirited anti-war songs throughout the demonstration.

Reviews of the show were mostly negative. In addition to being objectionable as gung ho war propaganda, it was a profoundly boring mishmash interspersed by seemingly a zillion commercials. Said the New York Times: “The teams race to complete missions under conditions that include live ammunition and explosives, the claim being that this will give the stars a taste of what real soldiers experience. That is an absurd overstatement, of course, since no one is shooting back or planting roadside bombs intended for them.”

The protesters had with them a petition launched by Roots Action, with approximately 18,000 signators (so far) urging that NBC “air an in-depth segment showing the reality of civilian victims of recent U.S. wars.” When women of Military Families Speak Out attempted to deliver the 500-plus-pages petition to an NBC executive, the head of security, Jim Kelly, lined up near the protest with six other security officials throughout the demonstration, insisted that they could not do so. There was a stand-off for over an hour while the women negotiated with him as he stalled them. Ultimately, the only thing he would allow was for them to give it to him personally, which they did. Will it ever be seen by a top NBC executive? Unfortunately, probably not.

The cause to shut down “Stars Earn Stripes” was aided immeasurably by nine Nobel Peace Prize winners, including Archbishop Desmond Tutu, who sent a strongly worded letter to Robert Greenblatt, Chairman of NBC Entertainment, Gen. Clark, Producer Mark Burnett, and others urging its cancelation.

In part, the letter read: “We call upon NBC to stop airing this program that pays homage to no one, and is a massive disservice to those who live and die in armed conflict and suffer its consequences long after the guns of war fall silent.” Tutu’s huge reputation attracted media coverage in the thousands all over the world to the Nobel Prize recipients’ opposition.

Encouraged by passersby’s sympathetic responses to the protest as well as the enormous media attention, the coalition decided to proceed with further actions. They plan to continue their Monday protests throughout the four-week run of the series, initiate a letter-writing campaign to NBC top-level people, and launch a boycott of the many sponsors.

We urge readers to sign the Roots Action petition, created by David Swanson. Go to starsearnstripes.org.

Among the many expressions of anger by the protesters was this one:“Having my son return from two REAL wars in Iraq and Afghanistan, with the cost of war carried in his body and heart, I find this deeply offensive,” said Sarah Fuhro, a member of Military Families Speak Out. “Having met wounded children and refugees from these and other wars, I find this disgusting. I hope NBC will reconsider this form of entertainment.”

From our perspective, “Stars Earn Stripes” earns nothing more than contempt and outrage.